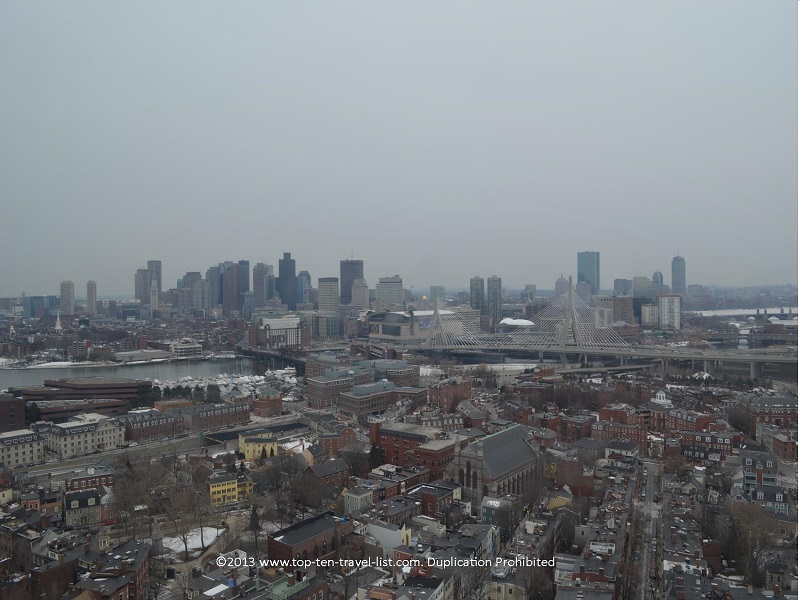 One of the best ways to explore Boston’s rich history is by embarking on the 2.5 mile journey along Boston’s historic Freedom Trail. The path leads you through 16 of Boston’s most historically significant sights. No visit to Boston would be complete without taking the time to complete this informative, fun, & scenic trail. You will follow a brick pathway from the start in Boston Common to the finish at the USS Constitution in Charleston.

We arrived in downtown Boston at 7:00 on Sunday morning. This was a wise choice as parking was easy to find and our pictures were not obstructed by large crowds. Although the day was chilly and windy, we enjoyed the peacefulness of walking around Boston without the normal crowds and congestion.

Below I have given an overview of the 16 sites you will encounter on the trail, along with a bit of information explaining the significance of each. I hope you enjoy this virtual tour, however, it is by no means a replacement for taking the journey yourself!

As with most tourist activities, there is a fee for the map. I have created a print out map of the trail that includes photos of each of the sites. Click the link below to download the PDF map to your computer then print it out so you don’t have to pay for one of less quality.

And now, a brief overview of the historical sights you will see along the trail. 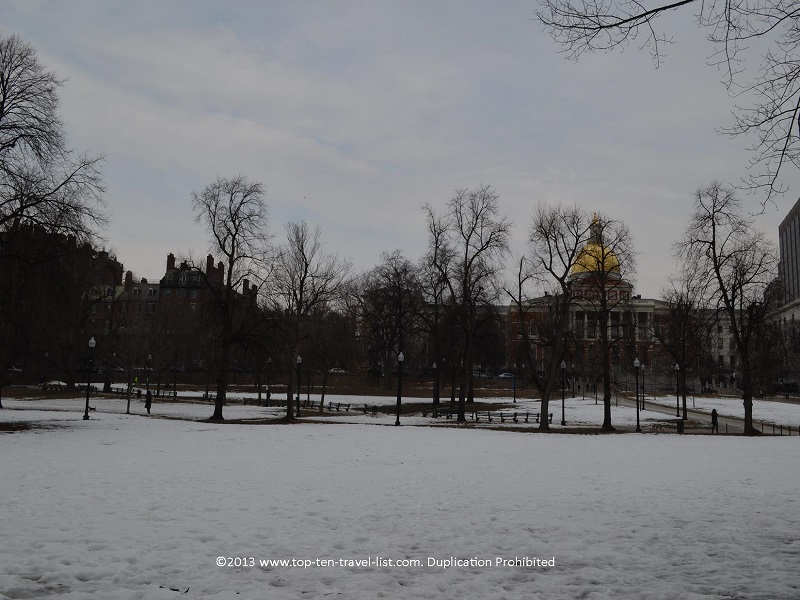 Boston Common, established in 1634, is the oldest urban park in the US. The beautiful 50 acre park has been used for numerous purposes over the years, ranging from hangings in the early 1800s to events (such as the annual Christmas tree lighting) today. Frog pond, one of the most popular features in the park, is transformed into a beautiful ice rink from November through March. 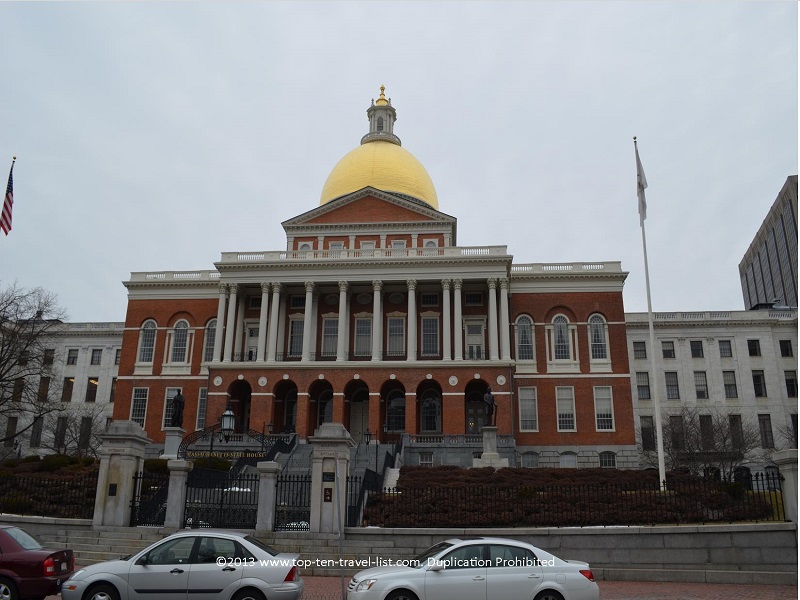 The Massachusetts State House, established in 1798, is home to the Massachusetts General Court and the Governor of Massachusetts offices. The building is located on top of Beacon Hill on 6+ acres of land. Great pictures can be obtained across the Street in Boston Common. 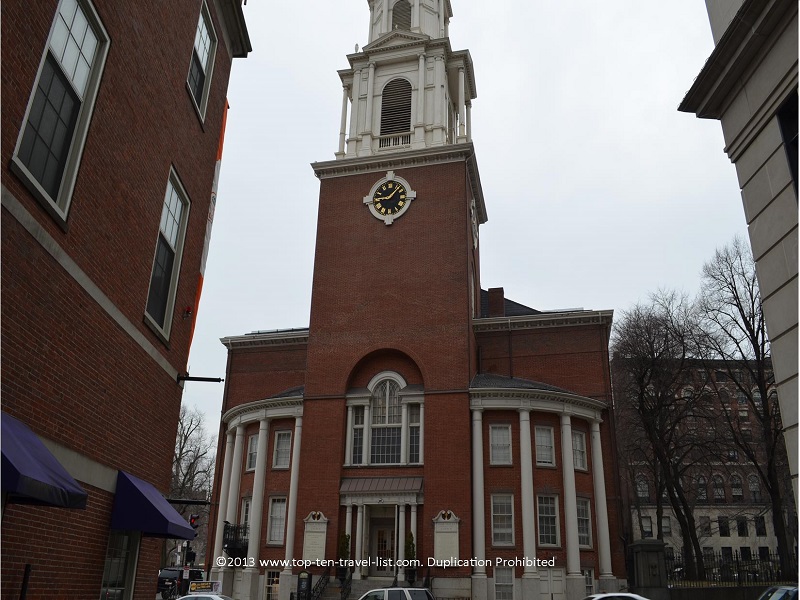 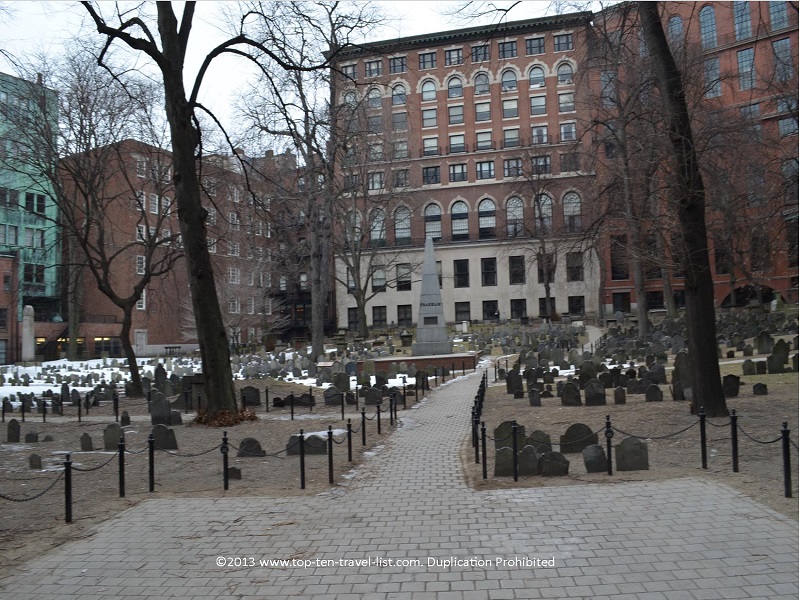 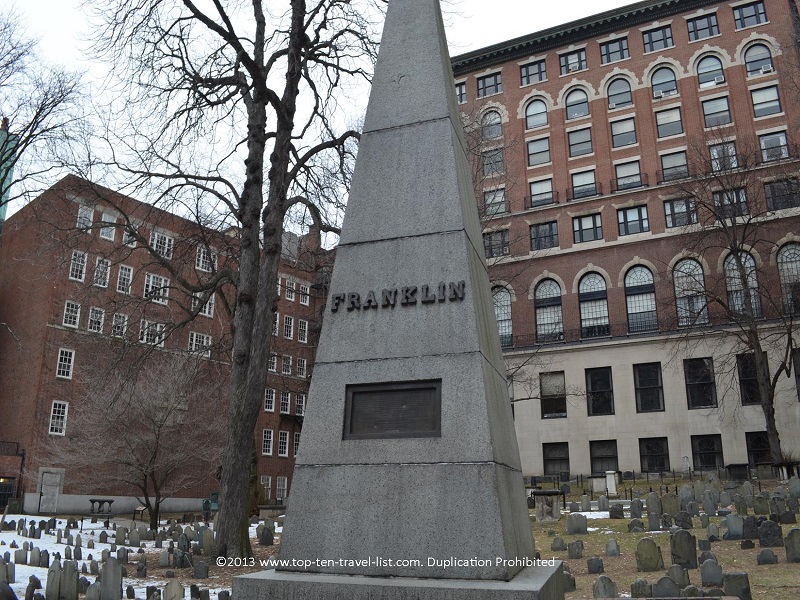 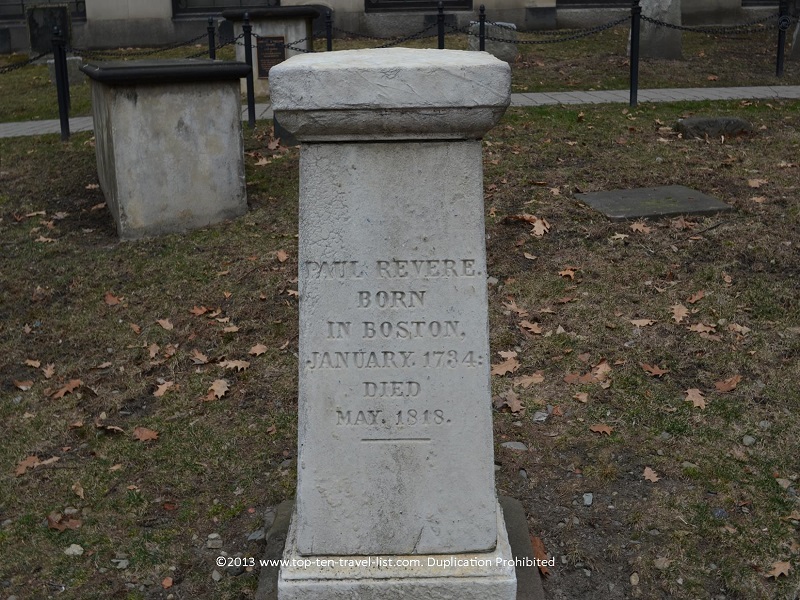 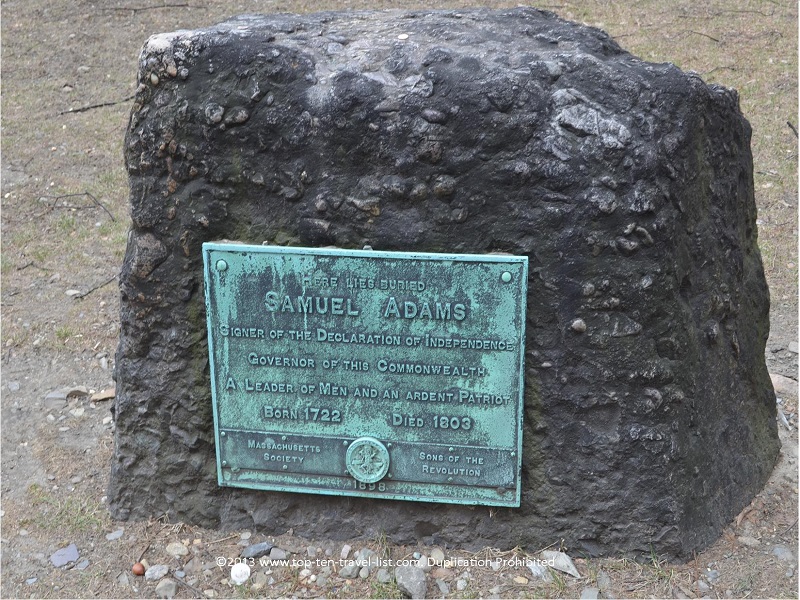 Old Granary Burial Ground, founded in 1660, is the 3rd oldest cemetery in Boston. Here you will find the gravestones of many prominent historical figures, including: Paul Revere, Samuel Adams, and Peter Faneuil. 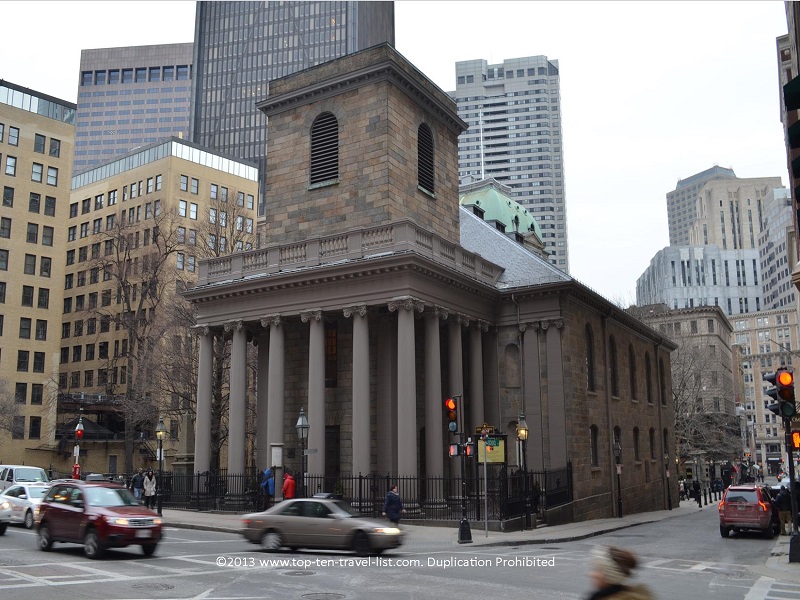 King’s Chapel, built in 1688, is an active Ecumenical Church. The architecture inside is supposedly the finest example of Georgian church in the US. Legend goes that those waiting to be hung could say their last prayers in pew 13. 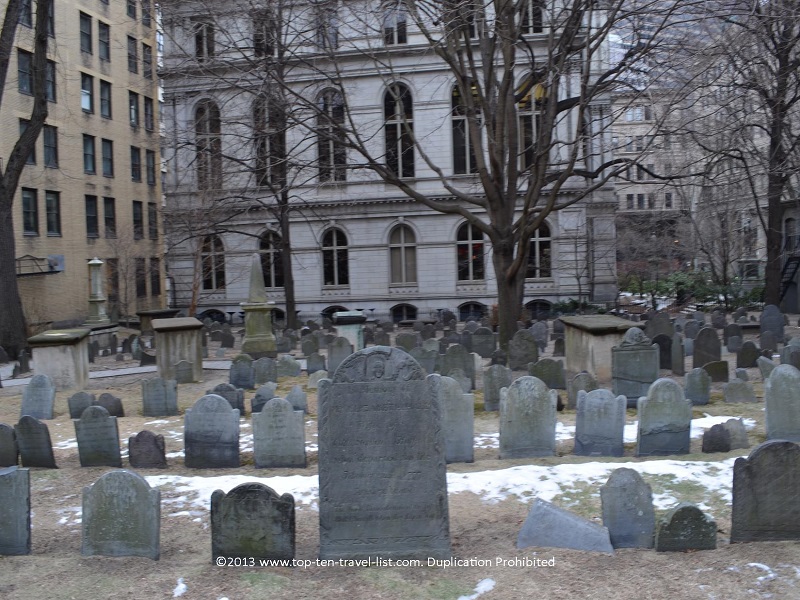 The grave of John Winthrop 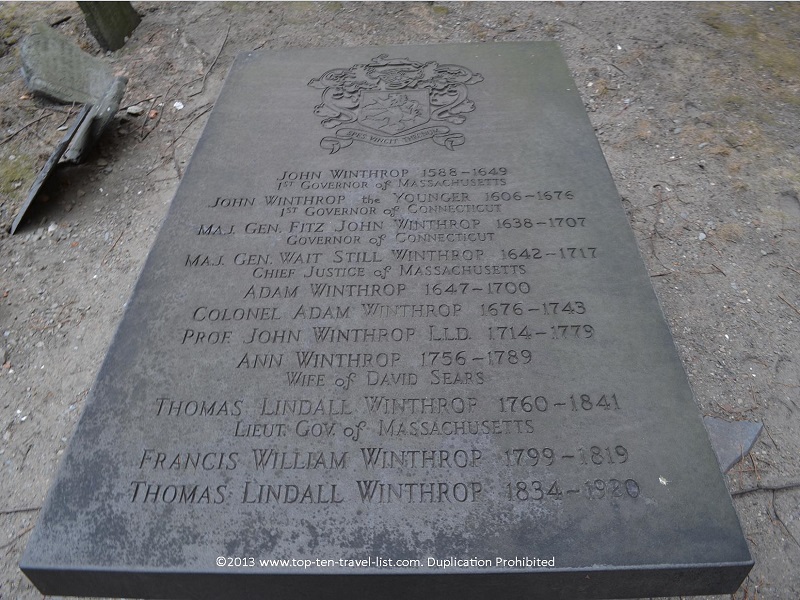 King’s Chapel Burying Ground, founded in 1630, is the oldest cemetery in Boston. John Winthrop, the first Puritan Governor of Massachusetts is buried here.

6. Site of the 1st Public School 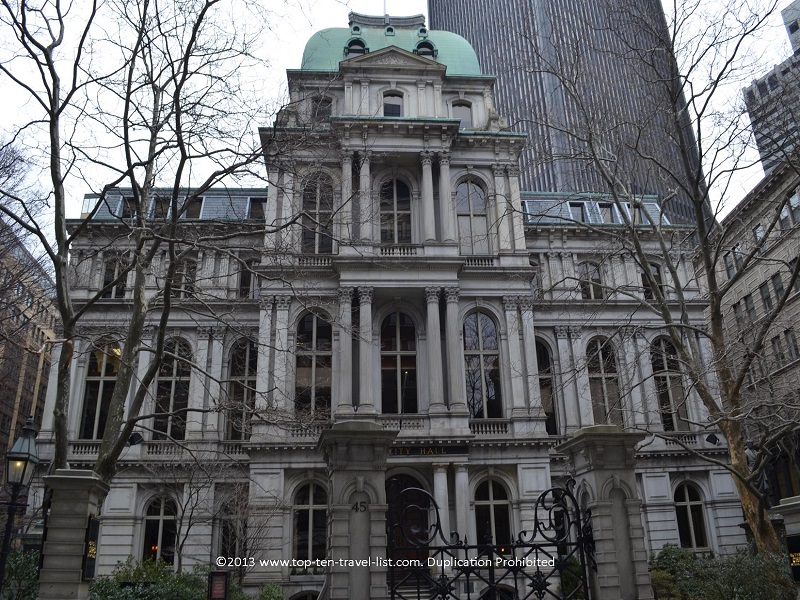 Boston Latin school, founded in 1635, was the first public school in Boston. It still lives on today, although not in the same location (the original school was torn down in 1745). Out front, you will find a statue of Benjamin Franklin, one of several prominent figures who attended the school (he later dropped out). The building pictured above is Old City Hall, which was home to the city council from 1865 to 1969. Currently, the building is being used  as an office and restaurant space. 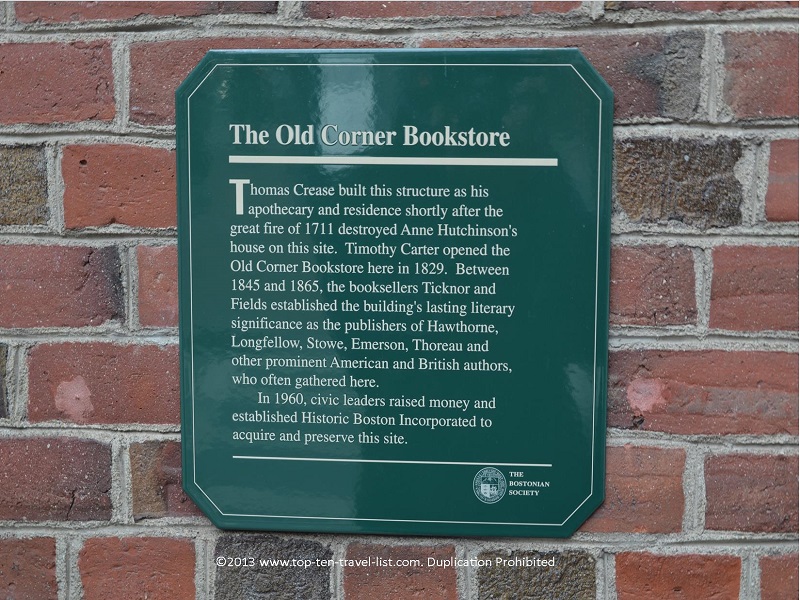 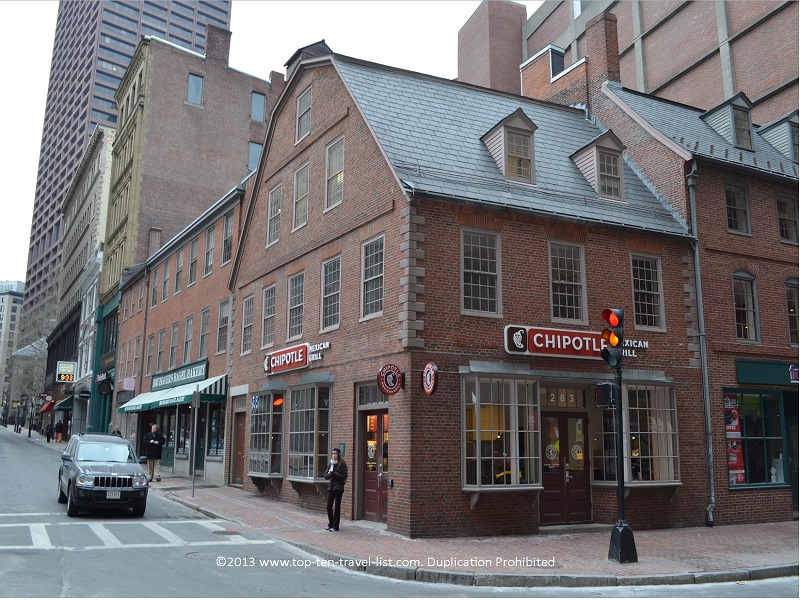 This historic building was built in 1712 as an apothecary (similar to what a pharmacy is today), and later transformed into a bookstore in 1828. It is most famous for being the location where several famous books were published including The Scarlet Letter and Walden. It now stands as a Chipotle restaurant, so be on the lookout as there is only a small plaque designating the building. 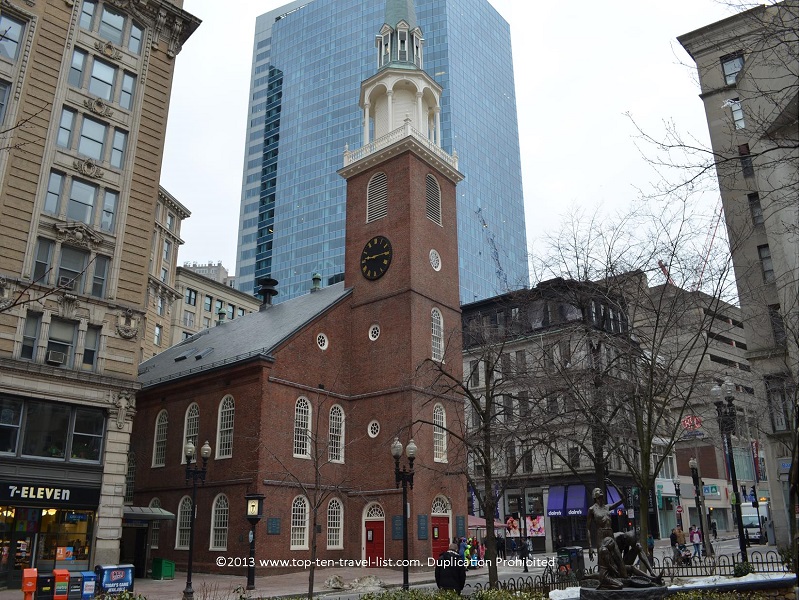 The Old South Meeting House, built in 1729, is most known for the meetings which eventually led to the Boston Tea Party. 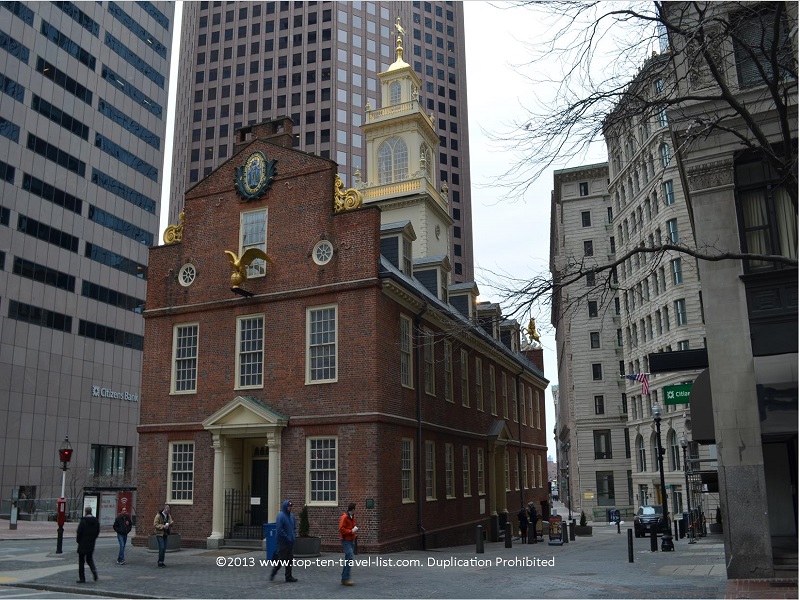 The Old State House, built in 1713, is the oldest surviving public building in Boston. Up until 1798, it was the seat of the Massachusetts General Court. Today, it operates as a museum open to the public.

10. Site of the Boston Massacre 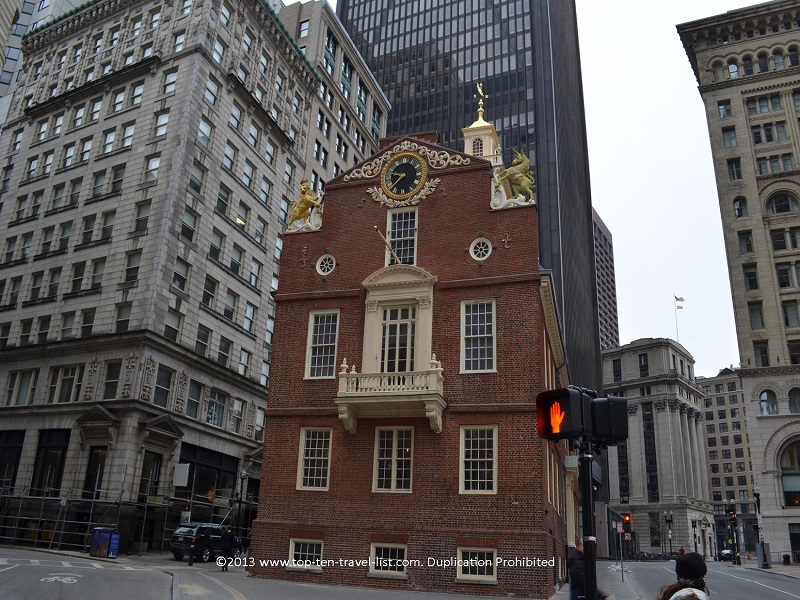 The Boston Massacre is the name for the street riot which took place in 1770 between the American colonists and the British. Tensions built up between the 2 groups and eventually escalated after a colonist insulted the “Redcoats.” In back of the Old State house, there is an emblem commemorating the incident. 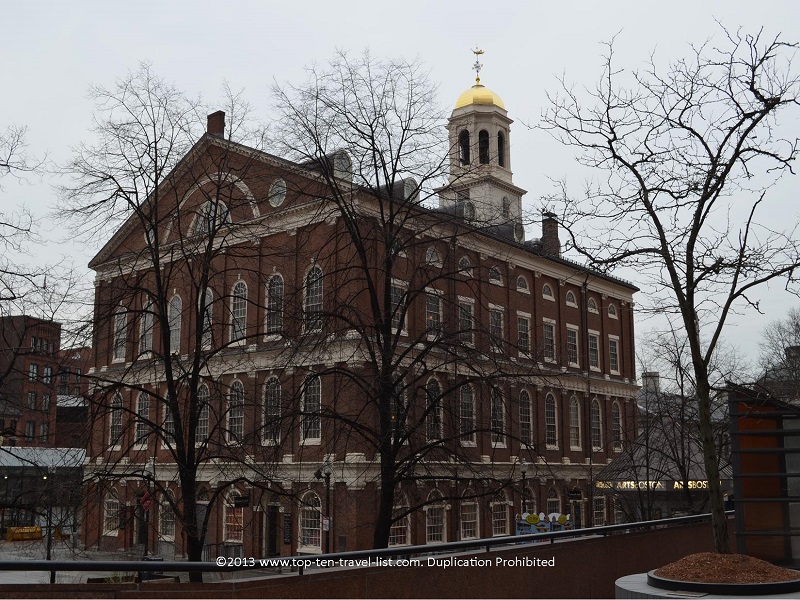 Faneuil Hall has been used as a meeting place since 1742. It was expanded in 1806. Today you will find 14 restaurants, including the most famous “Cheers” (the pub/restaurant where the TV show was filmed), along with the Quincy Market, which is the largest US food hall (here you will find over 36 international vendors) In addition, you will find numerous shops, street performances and live events throughout the year. 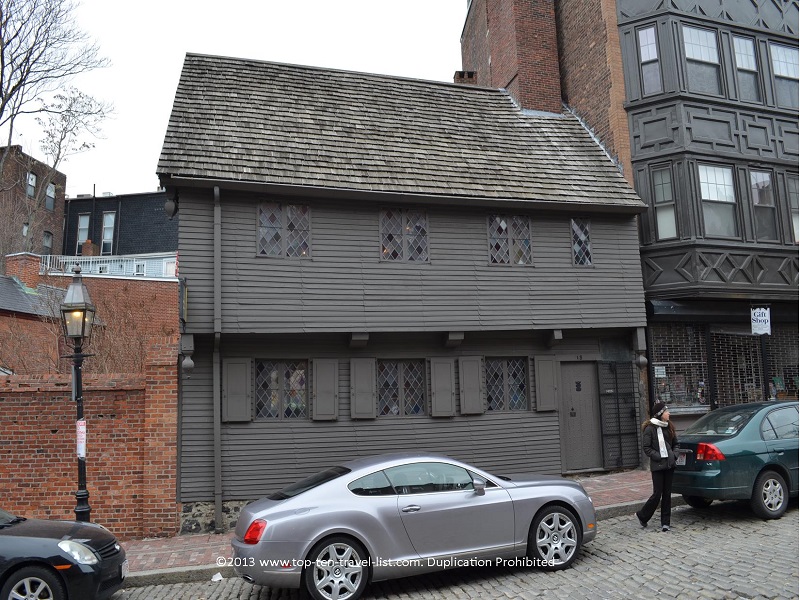 The Paul Revere house was built in 1680, which makes it the oldest building in Boston’s downtown. Paul Revere, whom is most famous for alerting colonists of the British arrival, resided here from 1770 to 1800. 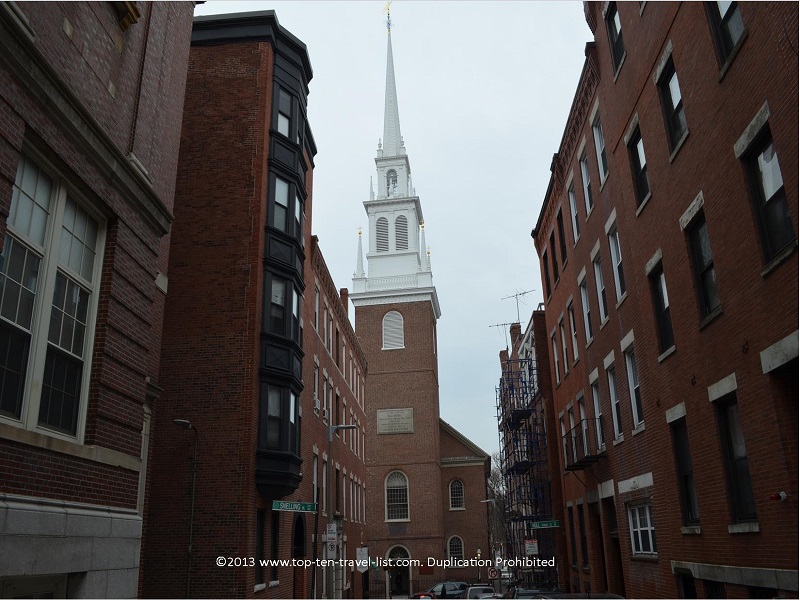 Old North Church, built in 1723, is Boston’s oldest church building. The location is famous for the for being the origination of the “One if by land, and two, if by sea” phrase. From its’ tall steeple (191 feet) Robert Newman signaled Britain’s arrival to Paul Revere – 2 lanterns were lit to announce the Britain’s arrival by sea. The interior is supposedly gorgeous, unfortunately Sunday mass was taking place during our trip. Make sure to check mass times if you plan on touring the interior. 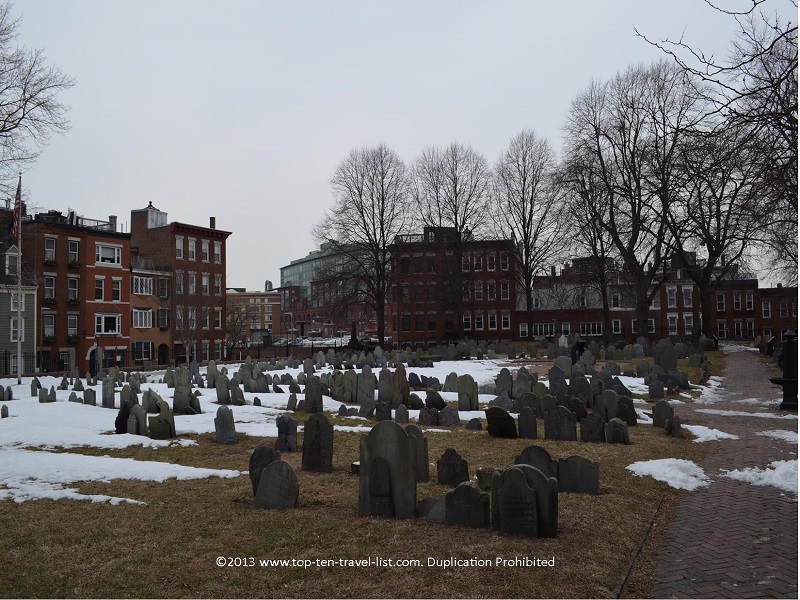 The Dupee monument, built in 1846, is the most elaborate in the cemetery. 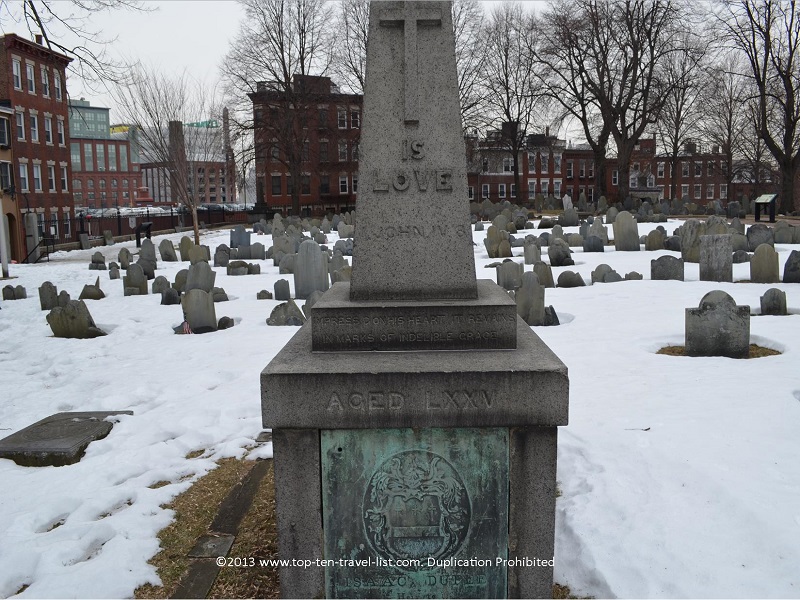 Copp’s Hill Burying Ground, founded in 1659, is the second oldest cemetery in the city. Robert Newman, who signaled The Britain’s arrival to Paul Revere from Old North Church,  is one of the notable figures buried here. 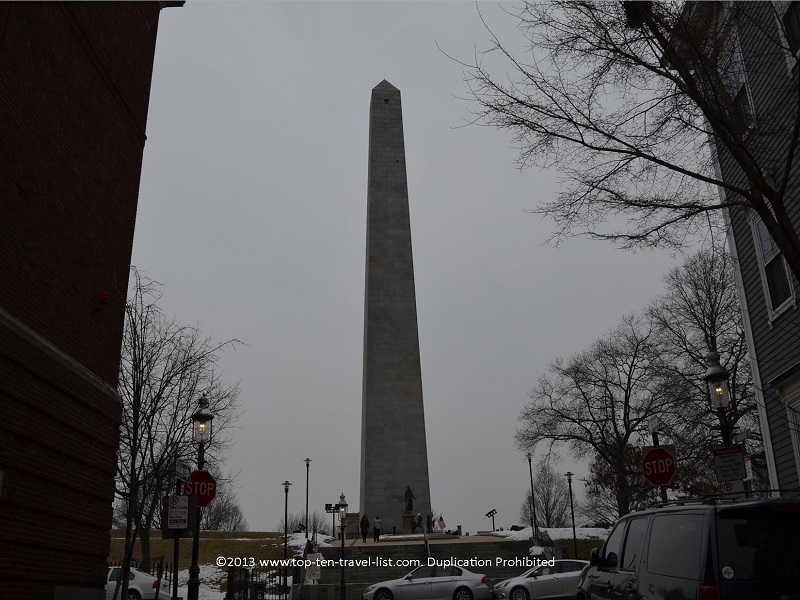 The Statue of Colonel William Prescott, put forth in 1881. Prescott was an important figure in the Battle of Bunker Hill. 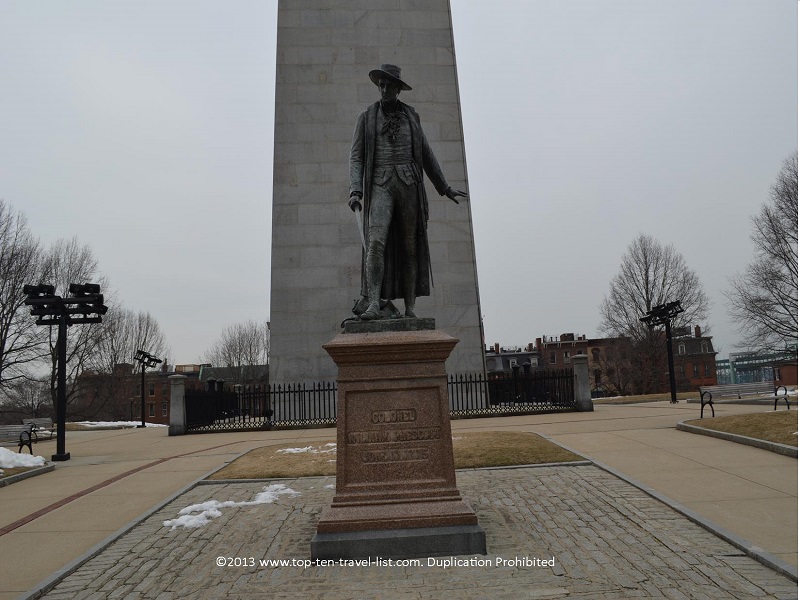 Bunker Hill Monument, a 221 foot granite monument, was built between 1827-1843 to commemorate the Battle of Bunker Hill. Visitors are able to go inside and climb the 294 steps to the top. I highly recommend planning a stop here along your journey. The views of the Boston skyline are incredible. It’s a steep climb, however, well worth it for the amazing views. Plan for an exhausting workout if you decide to add the climb to an already hilly 5-6 mile walk.

A few of the fantastic views 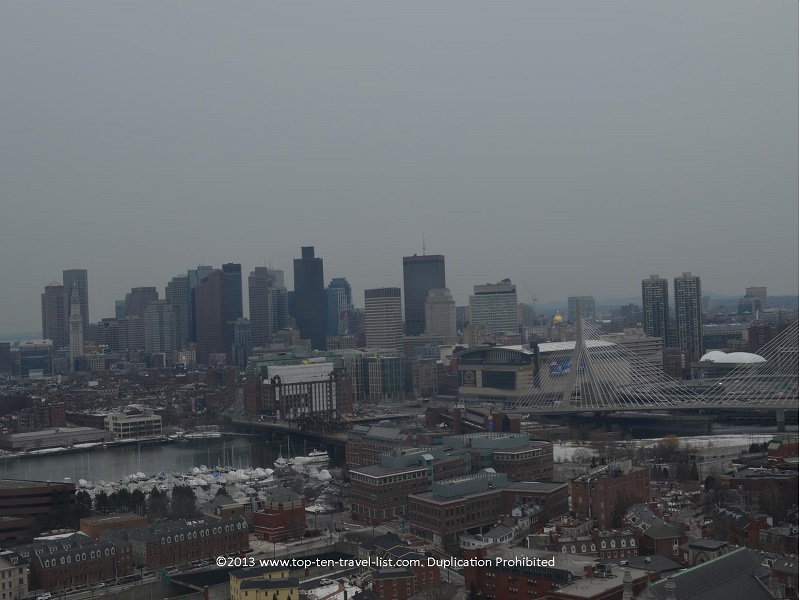 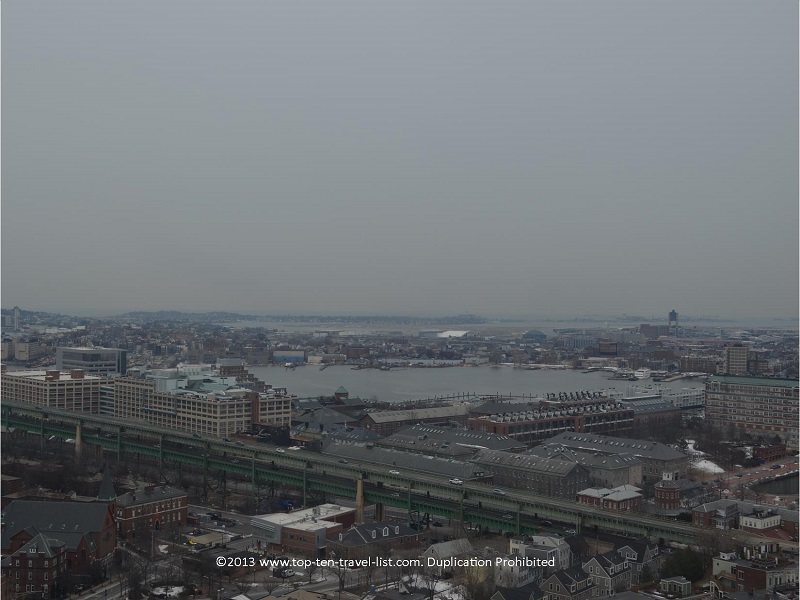 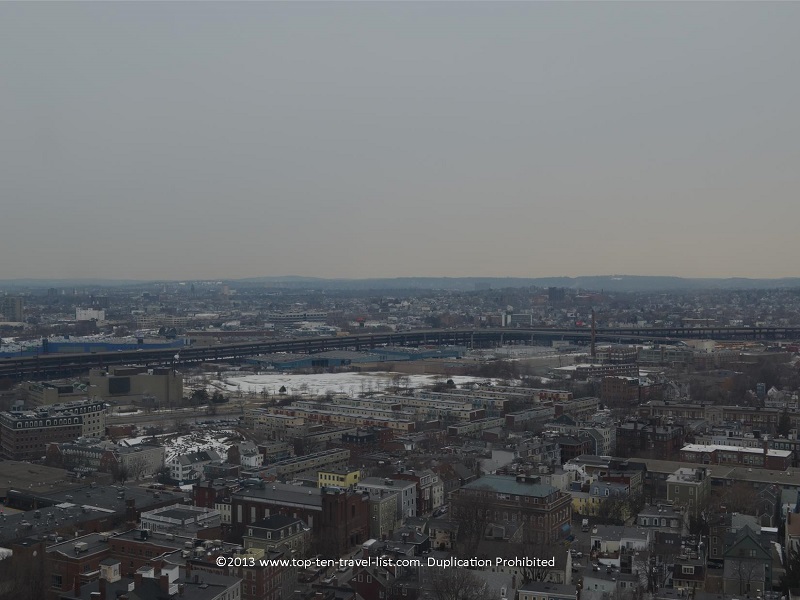