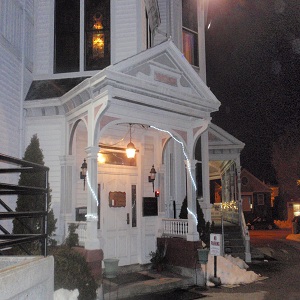 My boyfriend and I visited Spirito's Restaurant in Providence for our Valentine's Day dinner. We decided to stop in because we had previously purchased a Groupon deal ($30 worth of food for $15). We both like Italian food, so we thought this would be a nice romantic night out.

I was not impressed by the food here, especially for the high prices. I ordered the Pasta Capri dish which was a combination of penne with mushrooms, olives, artichoke and a sherry wine sauce.

They did not have any whole grain noodles which was a big disappointment considering it is in fact an Italian restaurant. My boyfriend said his Chicken Marsala was too dry and not very appetizing (he has had better). At $16+ a plate, the pasta dishes are just priced too high for the quality.

Each entree comes with a salad or soup. I chose the salad and now I wish I would have picked the soup! The salad was wilted and drenched in too much dressing (which tasted much too fishy).

Tips: The lunch entrees are much cheaper than the dinner!
Price Menu

Service was really bad - the waiters seemed too young and inexperienced. It took 10 minutes before our waitress even acknowledged our presence. She never really checked back on us or asked how our food tasted. The drink refills didn't come either. The entrees took very long to arrive - at least a half hour.

Here is one example of the issues we had with the service.: we were not offered olive oil with our bread until our second loaf. Then, when the waitress offered us the oil she just poured it onto our individual bread plates instead of offering us a new fresh plate to share in the middle. I didn't think this was very classy service, especially for what was supposed to be a fine dining restaurant.

There is an upstairs and downstairs dining room; we sat downstairs. It was pretty crowded even though we got there at 8:30, probably because of the holiday. The tables were too cramped together (I hate when you have to worry about other diners hearing your conversation!).

The interior was also too dark for my taste, although the chandeliers and fireplaces were impressive. I later found out that this restaurant used to be a funeral home which is probably why I had a creepy feeling while there! I would have preferred a happier more upbeat atmosphere (perhaps a few Valentine's decorations would have been nice!).

Spirito's Restaurant is not on par with other Italian restaurants that I have been to in other areas. The restaurant lacked experienced waiters and the food was priced too high for the quality. I am sure there are better restaurants in Providence - I hope to be at one of them next time I am looking for Italian cuisine in the area.

Check out some things to do in RI

Things to do in RI