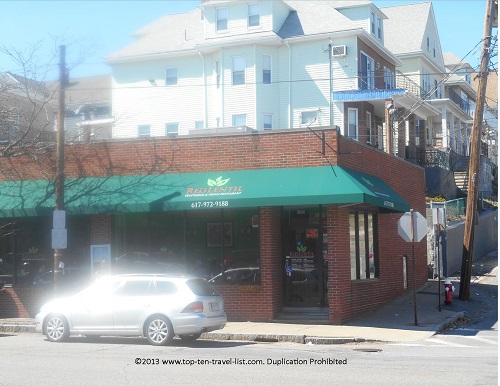 Red Lentil Vegetarian and Vegan Restaurant, located in the Boston metro area, is a health conscious restaurant catering to those with special diets, including: vegetarian, vegan, gluten-free, raw, and macrobiotic. Red Lentil is open for lunch, dinner, and weekend brunch.

Red Lentil's brunch menu includes an assortment of vegetarian and vegan items, including: omelettes, tofu scrambles, vegan waffles and french toast, salads, appetizers, and soups. The lunch menu includes: salads, soups, appetizers such as hummus platter and vegetarian/vegan nachos, sandwiches, burgers, wraps, and entrees such as vegan macaroni and cheese and sweet potato quesadillas. Dinner includes everything on the lunch menu and a few specialties, such as a macrobiotic platter, risotto, and butternut squash polenta. The drink menu includes an assortment of vegan smoothies, juice drinks, and coffee/tea selections. The nice thing about Red Lentil is that they offer vegan substitutions (Daiya cheese or tofu) for the majority of their dishes. Most wraps and sandwiches are available gluten free as well, although there is a small fee for any substitutions. Looking around the packed restaurant, the nachos and breakfast burritos both seemed to be pretty popular. The nachos consisted of a heaping plate of organic corn chips, guacamole, refried black beans, vegan or regular jack cheese, pico de gallo, and vegan sour cream. Red Lentil offers specials everyday of the week. I went with the special of the day: a spicy vegan hash, consisting of a mixture of potatoes, chick peas, artichoke, and additional assorted vegetables in a spiced curry sauce. Although small in size, the price was appropriate at $7. It wasn't really what I was expecting (a bit dried out), however it always good to try something new as opposed to a salad. The die extra protein. The special soup of the day (vegetable with cannellini beans) was very good. Mike was pleased with his Zen Veggie Burger, a mixture of black beans, corn, red peppers, garlic, carrots, brown rice, and Thousand Island dressing served on a sesame bun. While it wasn't the best veggie burger ever, it was adequate. The side included a choice of salad or sweet potato fries, both of which were tasty.

Service was extremely slow, although the packed restaurant may have had an effect on the quality on this particular day. The wait for the food was over an hour. Service was mediocre - not necessarily bad, but not overly friendly either.

Although the restaurant was very small and a bit cramped, every seat in the house was filled. Everyone seemed to be enjoying their meals, and as evidenced by the waiting line, Red Lentil appears to be a vegan/vegetarian hotspot in the area. Parking was a bit hard to find with Sunday church in session, however, free side street parking is available. Avoid visiting during prime hours to get a close parking spot. 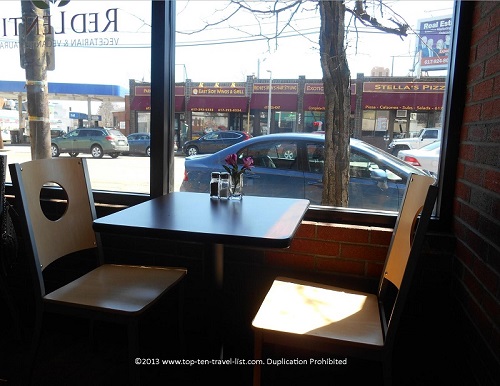 Head over to Red Lentil if you are seeking a moderately priced vegetarian restaurant with plenty of vegan and gluten-free substitutions. This restaurant is easily able to accommodate almost any dietary need, making it the perfect choice for those tired of wasting money at unaccommodating traditional restaurants.