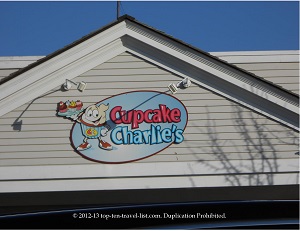 Cupcake Charlie’s is a local bakery shop specializing in a variety of homemade cupcake flavors which rotate on a weekly basis. I decided to treat myself to a cupcake during a recent trip to Plymouth. Unfortunately, the cupcakes had way too much icing and were too sugary for my taste. I also did not enjoy the cramped seating area.

I am not a huge fan of sweets so your experience may differ from mine. I ordered the “Chocolate Mint Madness Cupcake.” At $3 (update: now $4) I just felt like it was too overpriced for a simple cupcake – especially one that was loaded with frosting to make it look bigger.

The actual chocolate cake was good but the frosting was much too sugary for my taste, however, if you are a fan of sweet desserts than you may love the fact that the cupcake contains more frosting than actual cake.

A variety of unique flavors are available on a rotating basis. Some flavors include red velvet, lemon drop, and oreo.

Service wasn’t as friendly as I expected. They didn’t really tell us about any of the flavors – they just expected an order to be ready. Also, I was expecting more flavors (there were only 3 available but maybe that is because we arrived an hour before closing time).

I didn’t like the interior of this shop – it was crowded, yet there were only 3 tables. It was too cold to eat outside, so we had to stand around waiting until someone left their table. A business that offers a messy food like cupcakes should at least offer enough tables for every customer. 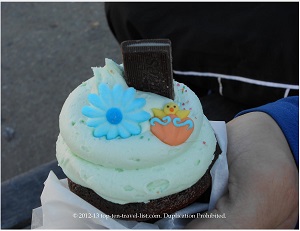 Overall, I would probably skip Cupcake Charlie’s. I have been to much better cupcake specialty shops. Do yourself a favor and save your money for one of Plymouth's wonderful waterfront restaurants: Mamma Mia's and Anna's Harborside are both great. I would say Cupcake Charlie’s is only for the die-hard dessert fan who is craving a sweet cupcake at the moment.