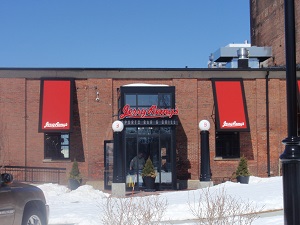 Jerry Remy's is known as being “Home to the Screen Monster” and features several very large television screens, which makes it a popular bar for watching sporting events. There are 3 locations in Massachusetts - one near the airport, one near Fenway Park, and a newer location which opened in Fall River. I had never heard of this restaurant before finding a deal online through Limelight Deals.

The food here included a variety of different pub type appetizers, burgers, salads, and drinks. On Sunday mornings they offer a brunch menu and Make your own Bloody Mary bar. I had a Fall Harvest salad which was a combination of vegetables in a citrus vinaigrette sauce - not really my taste - too sweet.

The spinach artichoke dip which was served in a bread bowl and included blue corn chips was pretty good. My boyfriend thought his turkey burger was good. We paid half price for the meal because of our Limelight Deal. However, I felt that the menu was a bit pricey for what you got and I am not sure if I would go again without the deal.

Service wasn't too bad - our waitress was pretty friendly and seemed to be happy to work here. Our experience with the service here was much better than at other area restaurants.

This is a great bar/restaurant for watching sporting events. There are 3 gigantic TVs (including one 17 foot, two 14 foot and various other sizes throughout). There is a large bar and plenty of drink options. The bar features high ceilings as it is located in an old warehouse type building. All seats feature great views of the "Monster Screens." 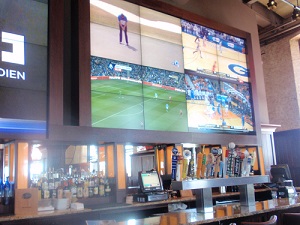 Jerry Remy's in Fall River is a great place to grab a few appetizers and drinks during game time. You will find the gigantic screens, large bar, pub type snacks, and decor a good environment for watching any sports event.