The Empire Grill (inside the Venus de Milo) 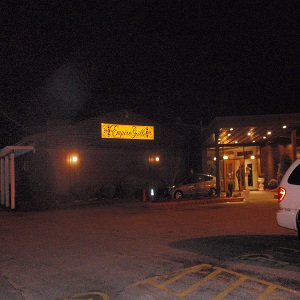 The Empire Grill in Swansea, Massachusetts is located inside the Venus de Milo Restaurant and Banquet facility, which is a popular location for wedding receptions, sports banquets, family gatherings, and more. The grand look from the outside is really enticing. We drove by this restaurant several times before finally deciding to check it out.

We decided to check out The Empire Grill on a Friday night for happy hours. Tuesday-Friday nights from 4:00-9:00pm they offer 1/2 priced appetizers at the bar. Almost all of the entrees are meat-based, so I was looking forward to trying out soup and a few appetizers. Because of the heavy meat based menu, Happy Hours was our best bet in terms of varied vegetarian options.

I ordered Minestrone soup and was dissapointed to find out it had meat in it. This was unexpected as I've never seen meat in Minestrone soup! Mike on the other hand loved his Clam Chowder soup. The Empire Grill is known for its' soup - the locals love it. I am sure the Minestrone would have been great if not for the meat. It was a huge serving as well, however, I was pretty dissapointed as I was really craving soup on a cold winter night.

We split a few appetizers including mozzarella sticks, Margherita pizza, and salads. The cheese sticks were a bit dried out and you couldn't even taste the cheese, as there was jut too much breading. The salad was just your basic salad, nothing special - mainly lettuce and too light on vegetables. The Marherita pizza was good, although a bit burnt. Mike ordered a draft beer and it cost $6: kinda expensive for one glass of beer.

We paid $30 for a beer, a salad, and 4 appetizers which really wasn't a bad deal, however, the food wasn't spectacular. I don't feel like we received a good value in terms of quality of food. The clam chowder was definitely the highlight of the meal, unfortunately I did not have the opportunity to taste it!

I wasn't overly impressed with the bartender/server. He was not very personable or friendly -usually bartenders engage in some small talk with you. Mike attempted to start a conversation with him but he didn't seem very interested.

The restaurant had a classy, elegant feel. I liked the Greek mythological themed murals on the walls. I noticed that this restaurant seemed to be very popular with the locals. We felt a bit out of place being the only people sitting at the bar which was completely empty on a Friday night. 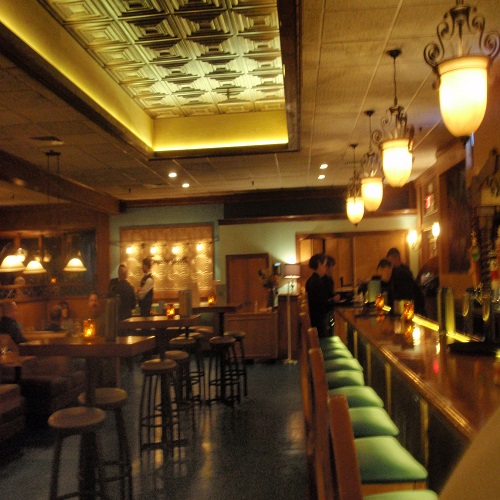 The Empire Grill was a disappointment in terms of food, however, the setting really is spectacular. I was displeased with the service and lack of vegetarian options on the menu. If they could improve in these 2 areas, I would possibly give it another chance.