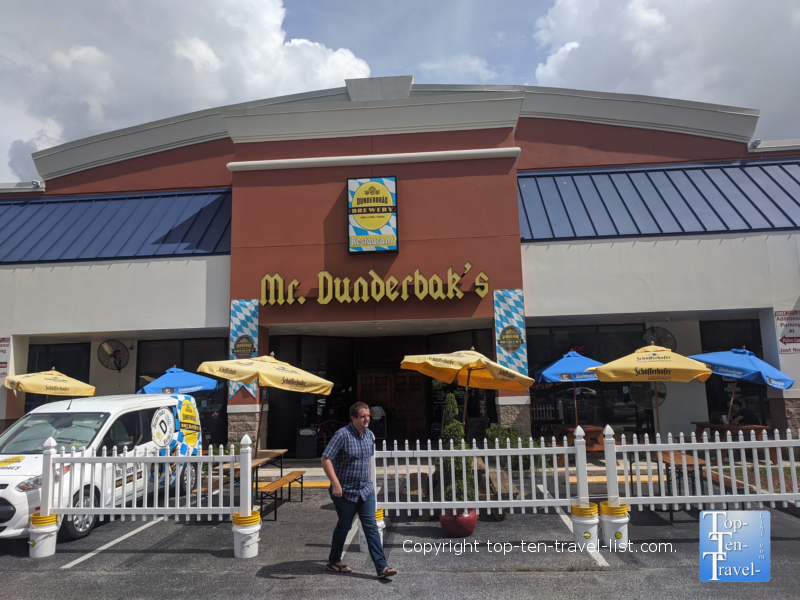 If you are seeking great German food in the Tampa region, look no further than Mr. Dunderbak's. This European style beer garden offers a fantastic menu of German plus American eats, including a sizeable selection of vegetarian entrees.

The menu is quite extensive. Do start with the delicious potato pancakes and any of the fried veggies (the potatoes and green beans are delicious). For an entrée, the potato and cheese pierogis are a good choice for anyone). The Cheese Spätzle unfortunately was completely dried out and inedible.

They are also known for their homemade desserts, so you will not want to leave without trying one! The Black Forest
Chocolate Cake and Apple Strudel are definitely well worth the caloric splurge!

As Tampa's oldest craft beer bar, this place never disappoints with over 400 bottled beers and 55 draft beers. They offer one of the most extensive beer menus in all of Tampa, so you can find just about anything here.

Service is decent enough, attentive although not overly friendly. Entrees came out a bit too soon after the appetizers.

The ambiance is very cozy and causal. It's nice and dark inside, so this is a great place if you need a break from the hot Florida sunshine. There is a large
bar too, so if you prefer to take in a game along with a few appetizers and drinks, it's a great place to do so.

There's lot of interesting decor to keep your eyes occupied and a bustling crowd each weekend which gives the place an upbeat vibe.

Overall, Mr.Dunderbak's is a great place to enjoy craft beer and great German food. As a bonus, there is an nice market and deli on site.