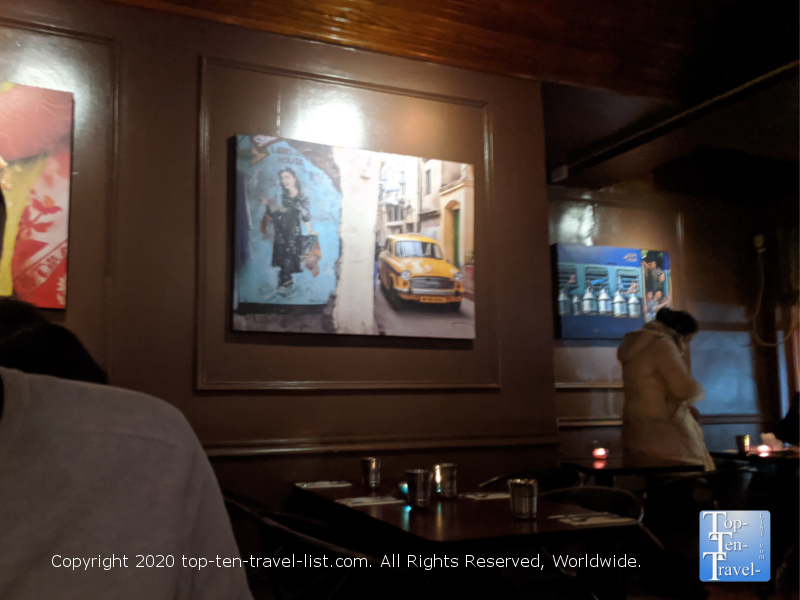 Bengal Tiger is a popular Indian restaurant located in Midtown Manhattan. The trendy crowd, great prix-fixe dinner specials, and eclectic ambiance, make it a very popular date night and foodie destination. If you plan on visiting any attractions in Times Square/Midtown area, Bengal Tiger is a great choice.

Bengal Tiger is most known for their prix-fixe lunch and dinner menu. For just $22, you can enjoy an appetizer, entree, and dessert. Selections include favorite appetizers like samosas and pakoras, Vegetarian, Lamb, and Chicken based entrees, as well as a choice between honeyed dumplings or rice pudding for dessert (go with the rice pudding!).

Although the food was a bit too spicy for my taste (even though I ordered mild!), the Saag Paneer and Tikki Masala were still pretty good. While far from the best Indian food I've ever had, the dinner deal is a real steal. The Mulligatawny Soup (not available as part of the deal) really was the highlight of the meal. The Naan (unfortunately, also not included) was also well worth the few extra bucks.

Of course, you also have the option of ordering from the regular menu. As the deal is the best value, I recommend choosing one of the deal entrees and adding a few sides or apps!

Service was very professional here. My entree was way too spicy for my taste, and the waiter kindly remade the dish without any problem.

The vibe here is young and modern. The crowd seems to be diverse and energetic. This is a fun choice for anyone looking for an energetic place to meet up with friends or take a date. The interior is dim with stylish decor. Be aware - the space is very small, and thus, the wait can be super long on busy weekends.

Bengal Tiger is one of the better choices for quality authentic Indian food in Midtown. If you are craving Indian and will be in the area, you may as well give it a shot. The pricing is quite affordable, the ambiance is very nice, and the menu filled with all the traditional Indian favorites.