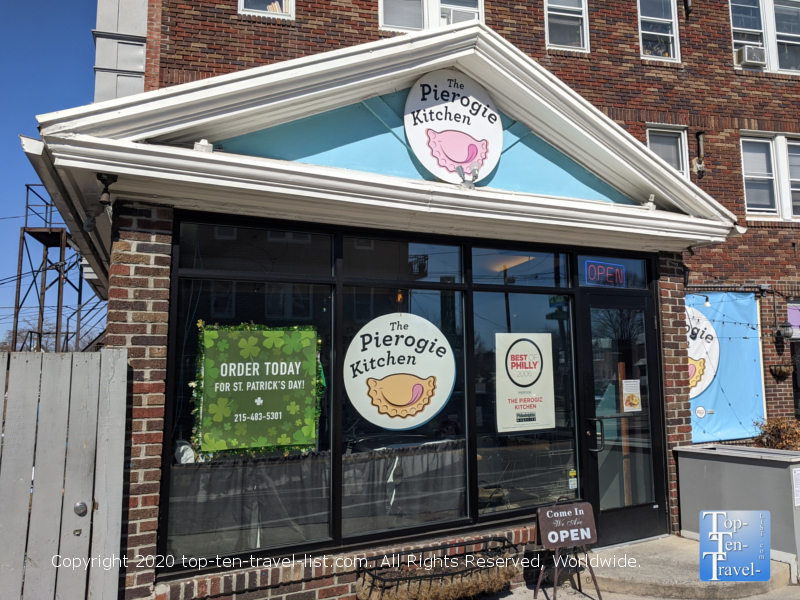 For the best homemade pierogies in Philly, there is no better choice than The Pierogi Kitchen. After trying the amazing pierogies here, you will never want to go back to store bought ever again! What a difference homemade recipes, freshly prepared food, and quality ingredients makes!

All pierogies are made fresh from scratch, and they taste a million times better than the frozen stuff found at the supermarket. They offer over a dozen pierogi varieties including spinach and jack cheese, loaded baked potato, and even a unique Philly cheesesteak creation!
The broccoli, cheddar, and potato really is a classic worth trying. Also, anyone with a sweet tooth needs to try the Chocolate Ganache. The pricing is pretty fair, with small plates priced at $7, large at $13, and family size at $26.

They offer so much more than just pierogies. Start with a delicious plate of potato pancakes or the Pierogi poppers. For something a bit healthier, go with the traditional Haluski, an amazing dish consisting of caramelized cabbage and onions and seasoned buttered noodles.

They also serve various brunch fare (try the Cinnamon Babka French Toast), stacker sandwiches, soups, and seasonal selections. There are plenty of vegetarians options throughout the menu, so anyone can enjoy a variety of delicious Polish fare here, from vegetarian pierogi poppers, to a creamy mushroom soup, to various veggie pierogi creations.

Note - You can pick up frozen pierogies if you prefer to prepare at a later time.

Service here was friendly. The food was served rather quickly. There was one mistake and our waiter was nice enough to remake the entire dish!

This place is very small with limited seating. During the summer months, they do open up a small outdoor patio.

The Pierogie Kitchen really is a hidden gem in Philly. This one really is worth making a trek for, especially if you are a fan of pierogies. Anyone who loves authentic Polish food will definitely be pleased with the diverse menu and authenticity found at The Pierogi Kitchen. Note - if you cannot make it here in person, they do ship within a 100 mile radius!