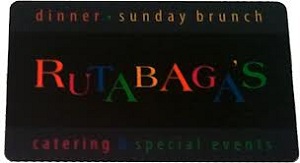 I only dined at Rutabaga's because I found a Groupon promotion online which consisted of $30 worth of food for $15. I didn't know what to expect as I had never heard of the restaurant. It was worth checking out for the great deal.

We decided to visit the restaurant on Sunday for the brunch menu. Being a vegetarian, this was a better option for me as there would be more options for me as opposed to the dinner which is mostly meat options.

I had a veggie omelet which was decent, but sort of expensive for the portion size. I was expecting better for what was supposed to be a fine dining restaurant. Price Menu

The waitress was not good - she was very slow and also rude. Also, when it came time to get the check, the waitress said that we could not use the Groupon on Sundays(she said it was only valid Tuesday-Saturday). This was disappointing because I only visited this restaurant because I had a Groupon deal. Now I had to pay for the meal out of pocket and still had an unused Groupon.

Rutabaga's has a nice location by the Idaho Falls greenbelt, but I expected better views from the dining area. I think they could have designed the restaurant better to have nicer views of the waterfront. We had a window seat, unfortunately, the parking lot took up most of our view. The setting inside feels classy and more formal than other restaurants in the area.

We ended up going back to Rutabaga's to use the Groupon during dinner hours. This time the experience was a bit better than the first time around - better waitress, but the food was still overpriced for the quality and portions that you received.