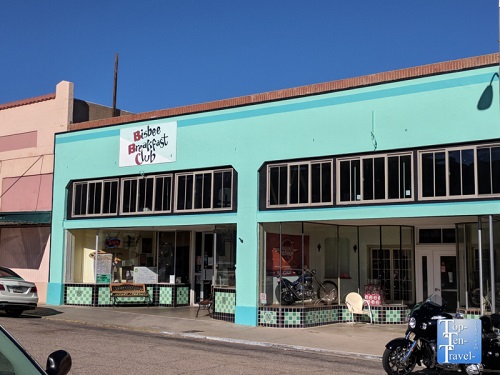 Although this diner is located a bit out of the way in Lowell, a small town which now pretty much is considered a ghost town, it's worth the drive for the classic vibe and variety of menu options. Plus, the drive over is quite scenic and there are several attractions to make your drive worth it, including the Lavender PIt mine and historic Erie Street in Lowell.

Bisbee Breakfast Club offers your standard breakfast fare, plus quite a few exotic selections for the more adventurous diners. One interesting choice to try out is the DJ's Potato Pancakes Plate. This dish includes 2 eggs, housemade potato cakes served with sour cream and applesauce, and bacon or sausage. Although the potato cakes were not the traditional ones I was expecting, it was still a decent dish and a good value at just 10 bucks.

Even better is the Crazy Burro, a tortilla stuffed with eggs, potatoes, and black beans, then topped with cheddar jack cheese, avocado, and red sauce, and served with hash browns. This burro was so big it was near impossible to eat, thus making it a great choice for those with big appetites.

If you are in the mood for something sweet, they have a decent selection of sweeter fare including Blueberry Pancakes housemade granola and powdered sugar. They are also known for their housemade desserts, which include everything from cheesecakes to cream pies.

They also serve Ombre coffee, which is a fantastic local roaster in the Tucson area (one of the best in my opinion).

Breakfast is served all day (7am-3pm), so there is no need to rush here to make it in time!

The servers here are friendly enough, although not as upbeat as you would expect.

The vibe here is very old-fashioned with various memorabilia lining the walls and classic music filling the air. The diner is located on Erie Street, the only remaining portion of Lowell, a mining town which was thriving in the early 1900's but now resembles a ghost town. The Bisbee Breakfast Club is the only business still open. 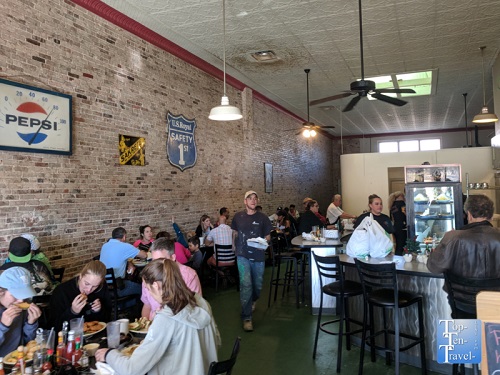 Bisbee Breakfast Club is the best place in town to get breakfast before exploring any of the historical sites in the area. While you are here, you must take a walk down Erie Street. It's both eerie and fascinating to walk around the now empty storefronts in a once thriving, but now totally abandoned town.