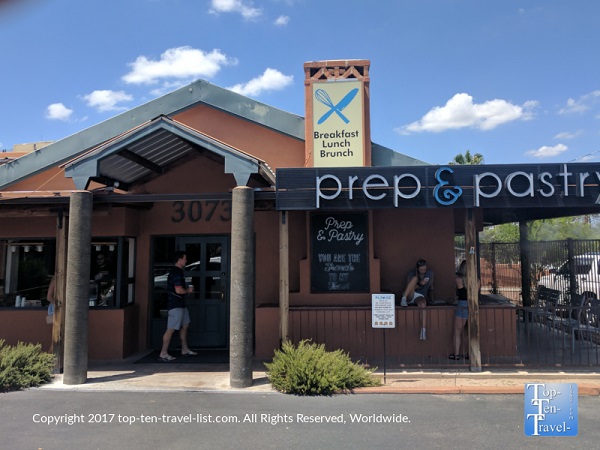 Prep and Pastry is a local Tucson breakfast favorite which has expanded to include 2 convenient locations around the city. Prep is a bit different than most of the chains found in the area as they only use locally sourced ingredients. Prep is known for its' "craft" breakfast fare, particularly their creative french toast selections and enticing display of pastries.

Prep and Pastry serves breakfast and lunch as well as brunch on the weekends. The menu includes an assortment of traditional entrees as well as a few creative selections like S'Mores French Toast. They are also known for their pastry selections, which includes a diverse selections of dossants, which is basically a doughnut/croissant mixture. These sell out pretty fast, so you need to get here early if you want to try one out!

We tried out the Simple 2 egg breakfast and the Return of the Mac, which included a mixture of scrambled egg whites, mushroom, spinach, poblano chills, avocado, sausage, sliced tomatoes, served with a side of vanilla yogurt. The $11 price tag was a bit ridiculous, especially for the in insanely small serving size. The dish was just average and definitely not worth the high price tag. Additionally, we felt sick a few hours later so it could have been food poisoning!

Luckily, we switched out potatoes for the sausage or this dish would have been an even worse value. Also, they only offer wheat or white toast, with no option to order sourdough or rye. The breakfast potatoes were pretty good. Prep serves Exo Roast coffee, which is an excellent local roaster, however, due to the lengthy wait for a table we ended up going to nearby Cartel Coffee Lab (another fantastic local roaster) during our 45 minute wait.

After visiting the wonderful Indian Gardens in Sedona on a weekly basis, Prep and Pastry felt like an incredibly bad value, although your opinion may differ. To be honest, the food is pretty basic here just like every where else despite Prep claiming that they are some "craft" eatery.

Prep and Pastry is highly overrated. As this is more of a weekend bloody Mary/mimosa drinking hangout, this really is no surprise. If you are coming more to socialize with friends rather than enjoy a high quality meal, then you might like Prep.

Prep's slogan is "Brunch without booze is just a sad, late breakfast" if that tells you anything. Prep is one of those modern eateries which focuses more on being trendy and enticing people in with drink specials rather than serving good quality food.

Service was incredibly slow. It took forever to get more hot water for the tea and even longer to get the check. Prep is one of those trendy places that knows that it has a loyal following and constant business, and thus, does not put much effort into providing friendly service.

Prep and Pastry is a very popular spot in Tucson for brunch. Expect a wait of 30-45 minutes on any given weekend. The restaurant is busy and noisy, so you should probably skip out on this one if you are looking for a quieter experience. The space is nicely decorated, although the tables are too much too cramped for such a small space. The noise level makes it hard to hold a conversation.

During the cooler months, the outdoor patio is a nice alternative to the noisy setting inside, however, it is completely unbearable to sit outside during the summer even with the covering. 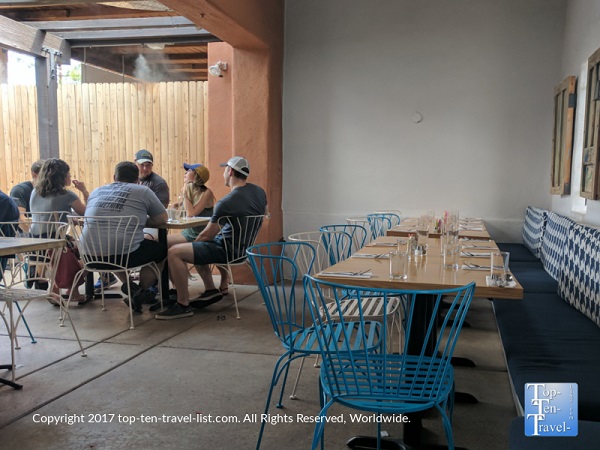 Prep and Pastry is an okay breakfast choice in Tucson, although there are many better options that do not require such a lengthy wait just to get in. Prep is a bit overrated as the portions are small, pricing is high, service is just okay, and the setting just too noisy. If you happen to be heading out this way and do not mind a way, then by all means check out Prep, otherwise keep moving on for a better breakfast experience elsewhere.