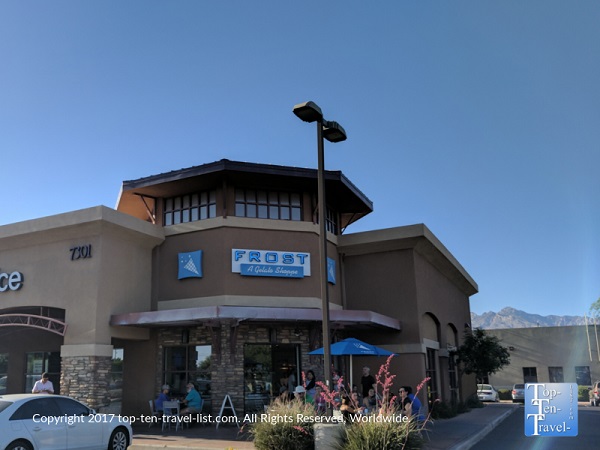 Frost is hands down the best gelato shop of the many scattered throughout Tucson. They offer the most delicious assortment of flavors, along with the best service of the bunch. Frost originally opened in Tucson in 2005 and has since then opened in over 10 cities across the country and even has opened in a few cities internationally. Once trying the gelato, you will see the reason behind the chain's immense popularity.

The gelato served at Frost is authentic and delicious with the most creative flavors in town. The owners actually traveled throughout Italy to perfect the authentic gelato making experience. Ingredients are shipped directly from Italy for the most authentic flavor.

Unlike other Tucson gelato shops where every flavor is a hit or miss, they are all amazing at Frost, so much so that it is hard to settle on just one. I recommend the Dark Chocolate which is rich and decadent and loaded with the tastiest dark chocolate chunks. A few other recommended selections include the White Chocolate Macadamia Nut, the Toasted Marshmallow, Peanut Butter Crunch, and the Lotus Cookie. Basically every flavor I have sampled has been delicious.

Because gelato uses less butterfat than ice cream, the resulting flavor and texture is bolder and denser than traditional ice cream, leaving you more satisfied.

Pricing is a bit high compared to a traditional ice cream, although not high in comparison to other gelato shops. For a bit extra, you can get your gelato served in a waffle cone.

The presentation itself is beautiful and you literally have to drag yourself away from the enticing display. Luckily, gelato is so much creamier than ice cream that you will be too stuffed and fulfilled to order anything else. There is always next time, and of course, you will be waiting for your return visit to test out new flavors!

Service is friendly and upbeat, just like an ice cream shop should be. Frost is not stingy about letting you sample as many flavors as you want and actually encourages you to try more. The same cannot be said for another nearby gelato shop.

The atmosphere at Frost is modern and clean. On nice days, you can sit outside and enjoy the mild Tucson weather with your gelato in hand.

If you find yourself craving a cool treat on a hot day in Tucson, head right over to Frost for some authentic Italian gelato. If you have never tastiest Italy's version of ice cream before, you will be sold on your first visit to Frost.