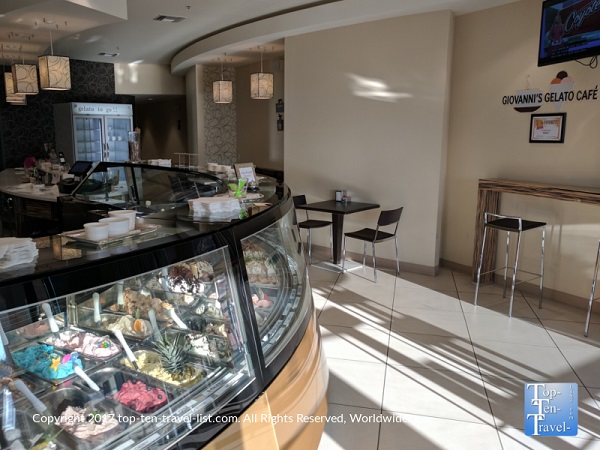 Giovanni's is one of my many gelato shops spread throughout the Tucson area. This one is located in Oro Valley, so it's a nice quick stop before or after shopping, or a refreshing cool treat after hiking in the heat at nearby Catalina State Park. Although not the best gelato in town (Frost is the best in my opinion), Giovanni's offers a nice selection of flavors, some of which are better than others.

Giovanni's offers a rotating selection of about 20 different flavors of gelato. You can sample as many as you like before committing to a final decision. Pricing ranges from $3.75-5.55, which is quite high, although comparable to other gelato shops in the area.

If you have never tried gelato before (Italy's version of ice cream), you are in for a treat as the texture is denser as gelato uses less butterfat and more milk than ice cream. The resulting flavor tends to be creamier and richer than ice cream. We tried a chocolate which was pretty rich and delicious. For less than a dollar, you can upgrade and have your scoop served in a waffle cone. Espresso drinks are also available.

The employees are really friendly at Giovanni's and patient with new customers who want to sample a whole bunch of flavors.

The vibe at Giovanni's is cheerful and friendly. There is a small seating area that is simple and classy.The presentation of the gelato flavors is great. Everything is well organized and clean with a fresh modern vibe.