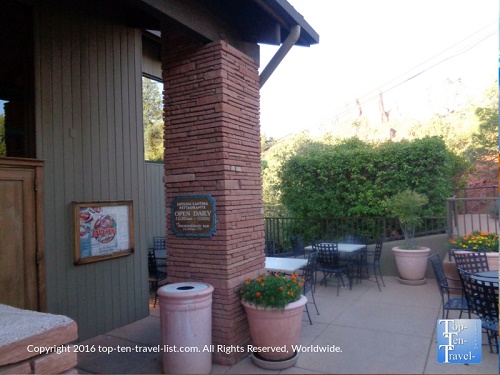 Javelina Cantina is a Southwestern style restaurant inside the Hillside Shopping Center in Sedona. The convenient location on 179 to and from many area hikes makes it a popular choice with tourists.

Although Javelina has a lively, colorful dining room, the food just does not stack up when compared to other more authentic Mexican choices in town.

Javelina offers a small menu of Tex Mex favorites with a variety of choices for everyone including vegetarians.

The complimentary chips and salsa were quite good, in fact they were the best part of the meal, and luckily our waiter kept the refills coming. The salsa was very flavorful and addictive.

Although the Veggie Fajitas sounded great on paper and looked scrumptious as presented, I was shocked when I actually took my first bite and discovered that the fajitas were drenched in a sweet tasting Teriyaki sauce. If the waiter would have informed me of the unusual sauce choice, I definitely would have ordered mine plain. Think Chinese food topped with sour cream and guacamole - it just did not work. Combining Chinese and Mexican food is never a good idea.

The Teriyaki flavor conflicted so much with the other sides like the guacamole, sour cream, rice, and beans that I had to take my order to go, rinse off all the veggies of the sauce, and refry them with olive oil. Sometimes taking a risky chance helps a restaurant, however, in this case I am sure most would not like the weird taste of these fajitas.

In short, do not order any fajitas unless a Chinese/Mexican fusion dish sounds good to you.

On the other hand, the Grilled Chicken & Vegetable Burrito was pretty good, probably because it was not drenched in a sugary sauce. This simple flour burrito was stuffed with boneless grilled chicken, zucchini, squash, and corn. The rice and refried beans which were served on the side were delicious.

Overall, Javelina isn't the best Mexican food, however, it's an option for anyone who wants to fill up on a lot of carbs before/after a hike. While the food is standard Tex-Mex fare rather than authentic, those who need a large meal at an affordable price will find it at Javelina.

Service was decent, perhaps a bit slow due to the packed house. We didn't mind taking our time as the restaurant ambiance was very nice and we were in no rush to leave.

The dining room is spacious with attractive colorful decor and large windows which offer a hint of red rock view along with plenty of green trees. The nice relaxing views give the restaurant a laid-back feeling despite the hefty tourist crowds.

Javelina has a nice outdoor patio with a partial red rock view and a relaxing fountain, however, for some reason they chose not to cover their tables with umbrellas (what were they thinking in hot sunny Sedona?!). Obviously, this severely limits the times guests can dine outside. 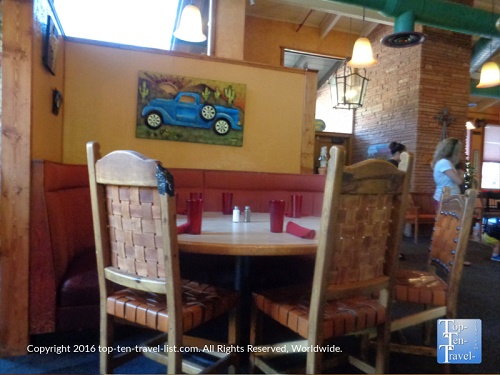 I would be unlikely to return to Javelina due to my less than ideal experience with the fajitas. I am not a fan of places that try to add a bunch of weird ingredients to food that is good all on its own. There are better Mexican style restaurants in town including the 2 listed below for a start.

Miley's Cafe in the Village of Oak Creek offers tastier food at cheaper prices in a less touristy setting. Additionally, El Rincon in the beautiful Tlaquepaque Village offers more authentic cuisine and one of the nicest outdoor dining patios in Sedona.