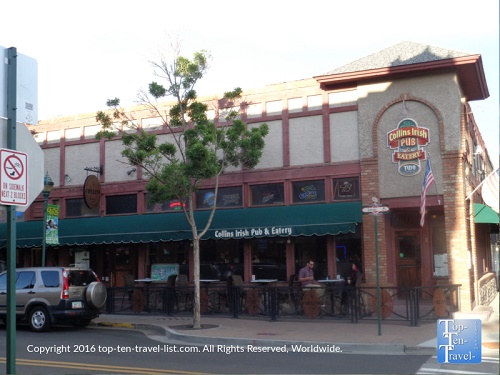 Collin's Irish Pub is one of many sports bars found scattered throughout downtown Flagstaff. Unfortunately, this bar is Irish in name only as the decor, food, and atmosphere resemble your typical American sports bar. Basically, Collin's will be a real disappointment for anyone seeking a true Irish restaurant/pub.

The menu was a bit of disappointing, consisting mainly of cheap bar food fryer snacks. We tried the Irish nachos which were a major disappointment as the chips were too thin and all dried out. The appetizer combo plate (potato skins, chicken tenders, fried mac and cheese, jalapeno poppers, and onion rings) was decent, although quite overpriced for simple bar food and much smaller a serving than I expected. Only 2 chicken tenders and onion rings were given out! The mac and cheese bites and poppers were pretty tasty, while the chicken was dried out and burnt and the potato skins were just bad.

The veggie pizza was just okay as well and consisted of only 4 tiny slices as opposed to a whole pizza. It kinda had that frozen pizza taste.

The only thing Collins really has going for it is great Happy Hour specials on appetizers and drinks from 3-7pm daily. This really is the only reason to visit and even then it is pricey for the quality of food you receive. However, if you want a cheaper alternative to the overpriced touristy options like Beaver Street and Lumberyard, then Collins may do.

Other items on the menu include sandwiches, burgers, fish & chips, Shepherd's Pie, and several varieties of Mac and Cheese, which are supposedly made fresh in house daily.

After visiting many amazing authentic Irish restaurants like O'Connors in Worcester, MA & Raglan Road in Orlando, I have to say Collins truly was a disappointment.

Service was alright. Our waitress was kind of absent most of our meal and didn't ask if we liked our meal, needed anything else, etc. No drink refills...

The inside of Collins looks like your typical sports bar with pool tables, lots of flat screen TVs, and a general noisy and rowdy atmopshere. Sadly there really is no Irish decor or ambiance to speak of. It also smells really badly of stale beer and could use a major cleaning. As this is a popular hangout for NAU students, it is treated more as a bar than a restaurant.

There is a small outdoor seating section which could be great for people watching, however, the presence of smokers made our experience a miserable one. Imagine a non-smoker having to deal with several smokers blowing smoke almost directly into your food! Gross! 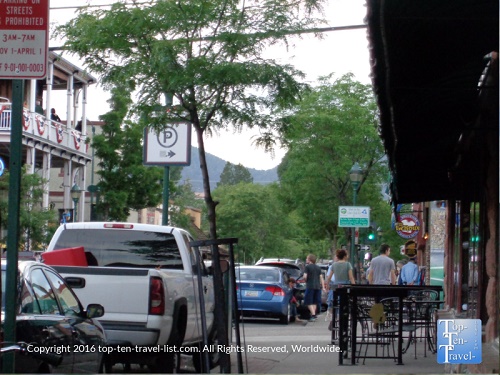 Collins is only worthy of a visit during happy hours if you are seeking cheap drink and appetizer specials. There is nothing Irish about this place in terms of ambiance or food. Go in knowing it is a casual sports bar and nothing more.