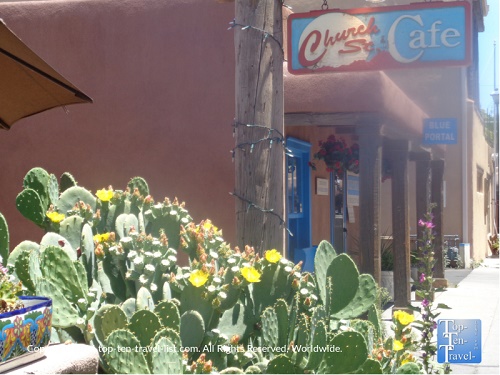 Church Street Cafe is a decent restaurant within the Old Town neighborhood of Albuquerque. If you are looking to try something new, Church Street has a great menu of New Mexican specialties. Make sure you know before going in that New Mexican cuisine is quite different from Mexican, and had I known that New Mexican is very cheese heavy, I probably would have opted for a different entree.

Overall, Church Street is one of the better dining options. Church Street offers the best outdoor patio seating in Old Town as well as great service and affordable pricing, thus making it a great stop if you happen to be in the area.

The complimentary chips and salsa are quite good, although you must be prepared to drink insane amounts of water in order to combat the super spicy salsa. For our entrees, we tested out the blue corn cheese enchiladas and the chicken burrito. All entrees come with delicious sopaipillas and honey (great after dinner dessert!), rice and beans. In addition, you can top your entrees with red or green chili, or both, which in New Mexico is referred to as a "Christmas" sauce.

The Chicken burrito was pretty tasty, consisting of a simple mixture of beans, chicken, and potatoes. The whole pinto beans served alongside were decent, although I prefer refried which are not served in New Mexican cuisine.

The Blue Corn cheese enchiladas were way too cheesy for my taste. Not only were they bursting to the brim with cheese, they were also smothered in cheese. Had I known, I probably would have ordered the veggie burrito or the fajitas. Regardless, it was something new to try and the ability to sub blue corn tortillas was great.

Other options on the menu include Chile Rellenos, Handmade Tamales, Tacos, Costillas Rojo. You also have the option of ordering a sandwich or burger if you would like to keep it simple.

Breakfast is also served with options ranging from pancakes to omelets.

Pricing was pretty affordable for a restaurant located in the touristy Old Town District. Lunch for 2 came in under $30.

Service was great, not at all slow as some restaurants with outdoor seating tend to be. Drinks were always refilled and the complimentary chips and salsa kept coming!

Church Street is home to the best outdoor patio in Old Town. The space is heavily landscaped with all different trees, flowers, and even a relaxing fountain. It is shady and cool even on hot summer afternoons. Everything is very colorful and relaxing. Overall, it is one of the best places to linger over a long meal on a lazy vacation day. 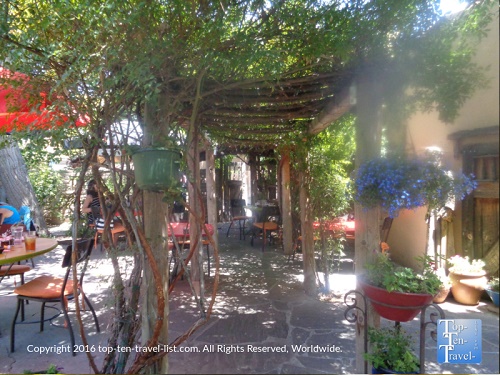 Church Street Cafe is one of the better dining options in the Old Town area. Not only will you get to try out some interesting New Mexican dishes, you will also get to relax in a gorgeously landscaped courtyard.