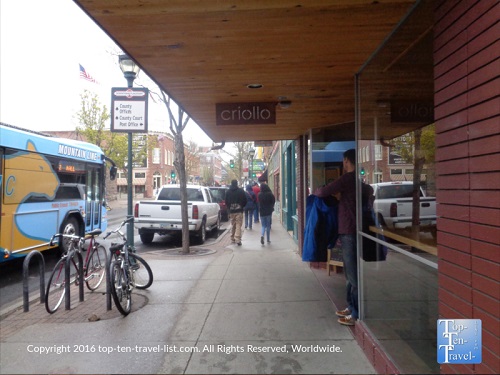 Criollo uses organic produce, grass fed beef, and seasonal ingredients to ensure the freshest possible meals. No GMO's are used in any entrees. They use local ingredients whenever possible, including tortillas from a local Flagstaff company known as Tortilla Lady.

A few interesting selections on the menu include the Salmon Tostada, Coconut & Masa Fried Calamari, Pork Belly tacos, and Braised Duck Tacos. The restaurant offers one of the most popular Happy Deal specials in the area (Mon-Fri from 3-6pm) featuring great specials including $2.50 fish tacos.

For brunch, we tested out the Breakfast Burrito and the Calabacitas Tacos (one of the few vegetarian choices on the menu). For vegans and gluten-free diners, the menu is conveniently marked as to whether or not the entree is customizable to suit either diet.

The Breakfast Burrito, a local flour tortilla stuffed with eggs, bacon, cojita cheese, black beans, and a green chilli sauce) was pretty decent, although a bit overpriced at $11, especially considering the potatoes served alongside were completely burnt!

The breakfast potatoes were chopped much too small and completely burnt, which was a bit surprising for a business that claims to be a fine dining establishment. Probably, the worst potatoes we have ever tried in a restaurant.

The Calabacitas Tacos consisted of 3 tacos overflowing with sauteed squash, zucchini, onions, peppers, corn, green onions, and cabbage. The cojita cheese, salsa, and cilantro, which were supposed to be included, were nowhere to be found, thus giving the tacos a very bland flavor. I could have spiced the dish up myself at home and saved myself the overpriced $11 price tag. The dish was served with black beans and rice, which were just average tasting, nothing to brag about.

As for the rest of the menu, the only other entrees which looked appetizing were the Salmon Tostadas and the Blue Corn pancakes. However, the less than spectacular service, inflated prices, and incredibly noisy setting would not bring me back to try another entree.

Service was pretty standard for Flagstaff, not necessarily bad, just stiff and aloof.

The dining room of Criollo is modern and trendy with big floor- to-ceiling windows gazing out into the downtown. It's a fun place to people watch and enjoy all the interesting sights of Flagstaff (watch for the Alpine Pedaler, a bar on wheels!).

While the exposed brick walls were nice, the overall design was a bit uninteresting and could have been spruced up with a few more individual touches. It appeared to be more of an upscale bar than a restaurant due to the minimalist design, loud music, and college aged staff standing around gossiping.

It's also a very chilly place during the colder months with the constant opening/closing of the front door.

The biggest disappointment, by far, was the insanely loud music blaring in the background. We could not hold a conversation, and in all honestly just wanted to get out. We felt was if we were in a noisy bar as opposed to a restaurant, unfortunately, the norm for the college run downtown Flagstaff establishments.

Unfortunately, like many other downtown Flagstaff businesses, Criollo seemed to be catering more to the college crowd with the loud music, mediocre staff, and bar like ambiance. 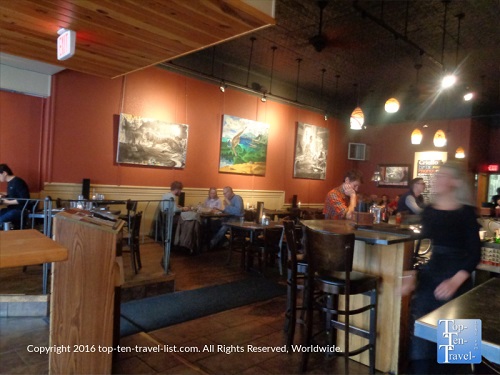 Overall, Criollo is an okay choice if you have run out of other options. It is one of the more tolerable options downtown, however, it is far from one of the top dining choices in Flagstaff.

The food was a bit bland for Latin cuisine, and the pricing was much too high for the overall mediocre setting, service, and quality of food. If you feel like paying a lot of money to eat in a bar like setting, the choice is up to you.

The noisy background, overpriced menu, and impersonal staff, would not make me return anytime soon.