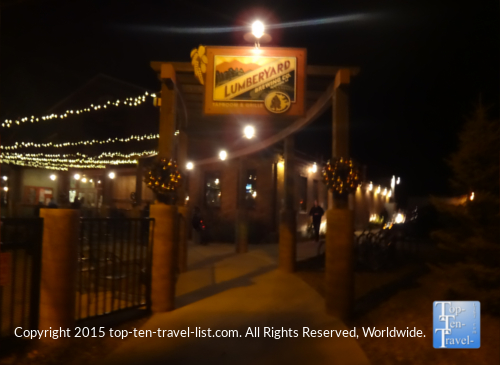 Lumberyard Brewing Company is one of the many pub style restaurants/bars found lining the streets of downtown Flagstaff. Choosing amongst the numerous options can be overwhelming, however, Lumberyard stands above the rest with friendlier service, bigger portions for less, and more vegetarian options.

Lumberyard is most well known for their extensive beer selection, which includes a number of local options. In terms of food, the menu is similar to Beaver Street Brewery as they are both owned by the same person, although Lumberyard is a better value as you get more food for your money. In general, the food at Lumberyard was a bit tastier as well.

Here you will find standard pub fare like wings, fried appetizers (the Southwestern Spin Dip and Deep Fried Mac and Cheese Bites are both excellent), soups and chili, enormous salads, sandwiches (including an option to build your own), burgers, mac and cheese, hot dogs, and burritos.

Aside from the apps, we chose the House Salad and Colossal Sub Atomic Burrito as our entrees. The House salad was enormous and included many more toppings that your average. The regular size salad which was loaded with mixed greens, peppers, carrots, red onions, cucumbers, tomatoes, and Colby Jack Cheese is easily shareable amongst a party of 2.

The burrito was a hearty meal, consisting of Spanish rice, romaine lettuce, guacamole, salsa, sour cream, Colby jack cheese, grilled peppers, and black beans all stuffed into a tortilla wrap! Although we chose a vegetarian version, a chicken/pork combo is also available.

I have to say that with our 2 apps plus the entrees, we definitely did not leave hungry. The portions were enormous, and in general a much better value for your money than the majority of restaurants downtown.

There were a surprising number of vegetarian options including crispy tofu bites, mac and cheese, a veggie burrito, a herbivore burger, veggie filled salads, and all the appetizers except the Irish Rolls. It's nice to know that a vegetarian can dine alongside meat eating friends and still have plenty of options besides a simple salad.

The Cerviche de Verduras is a blend of tomatoes, red onions, jalapenos, cucumbers, cilantro, lime juice, avocado, and hearts of palm served with crunchy wonton strips and tortilla chips. It looked delicious and I would definitely try out if I find myself visiting again.

Our server informed us that everything on the menu is fresh and prepared in house.

Service was wonderful, a refreshing friendly change over the standard service received in most restaurants in the area. Our waiter was friendly, attentive, and willing to make any substitutions without a hassle. In fact, we were told from the beginning that they had no problems accommodating any requests.

The setting at Lumberyard is like your average bar with flat screen TVs, dark wood, some exposed brick, and a nosier atmosphere. It's definitely not a date night destination, however, a great choice when you want a casual spot to meet up with friends for some drinks or appetizers or enjoy a game. In general, the restaurant is usually always busy, especially on weekends where you can expect a wait to be seated.

On Friday nights, they offer free country line dancing lessons. It may be something to look into if you find yourself in Flagstaff on Friday night with no plans.

The outdoor seating area is very nice, lit up with pretty lights and a big fire-pit in the middle. Unfortunately, it appeared to be closed down due to the cold weather. It would be a great place to enjoy during Flagstaff's mild summer months. 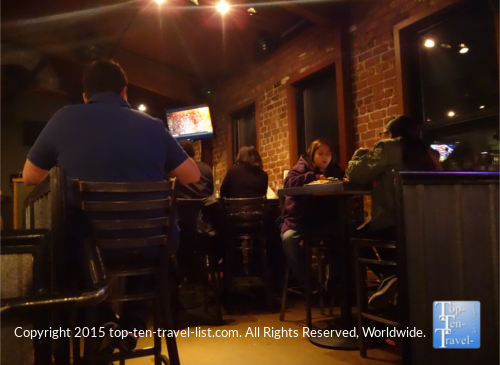 Overall, Lumberyard is a decent Flagstaff choice. Although not the best restaurant in town, it's probably your best bet if you are looking for casual pub style food. Great food, service, and a diverse menu place Lumberyard amongst my list of top casual restaurant choices in Flagstaff.