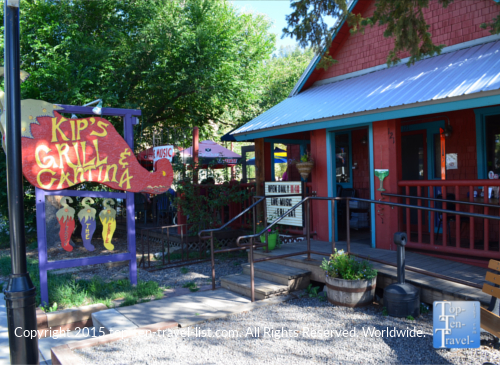 After receiving recommendations from our hotel and several local residents, we decided to check out Kip's Grill, one of the most popular restaurants in Pagosa Springs. Despite the praise for Kip's, I was a bit dissapointed in the service, food, and pricing. Although far from the worst option in town, it pales in comparison to most other Southwestern restaurants.

Kip's Grill offers a small menu of Southwestern and American entrees and appetizers. There are a few gluten-free items, although not merely enough to give the gluten-free diner many choices. Vegan and vegetarian options are even more limited.

The chips, salsa, and guacamole was the best part of the meal. However, it was still overpriced for such a small serving. We ran out of chips before we were halfway done with the dips.

The nachos as an appetizer were horribly dry. The restaurant should have been embarrassed to even bring it to our table.

The Spicy Shrimp tacos, consisting of shrimp marinated in a spicy cayenne garlic sauce and topped with salsa fresca, cabbage, and lime, were decent. I would have preferred a side of rice and beans and perhaps a few more toppings on the tacos as they were a bit too bland. Any addition to the tacos were an extra $1. Like I stated above, just way overpriced.

Another customer next to us actually complained about his ribs, the special of the day. Not sure how this restaurant received so many positive reviews: I guess in a town with limited options, it is far from the worst.

Service was very slow and our waitress had a surly attitude. She seemed inconvenienced by any questions we had over the menu and did not show a hint of friendliness, which is very unusual for a tourist town. I guess due to the restaurant's popularity, they feel no need to provide great service.

Stepping into Kip's, we were surprised by the loud pub type atmosphere. The interior resembled a bar more than a restaurant, so I guess we should have known right then and there that the food wasn't going to be spectacular.

There were no seats available inside and the setting was very loud - one of the busiest restaurants I've seen. We chose to sit outside and enjoy the nice early fall temperatures and quieter setting.

On a side note, I would have preferred the food to be served on a plate, rather than in a cheap basket, especially for the prices we paid. 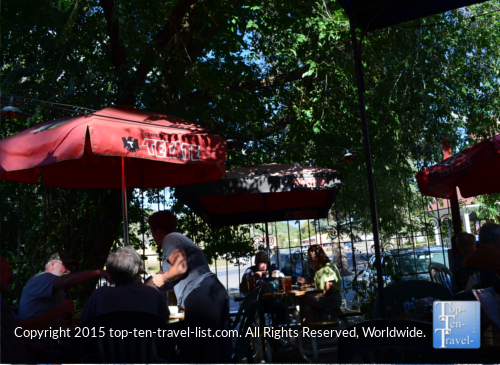 Overall, Kip's Grill is not the best or worst option in town. It is mediocre at best, with both the service and food needing to be improved. Sticking to a more traditional Mexican menu would greatly improve the dining experience. Expanding the menu would be a good idea too, and perhaps adding a vegan option. If you do not mind paying for bland Mexican-American food, than by all means go ahead.