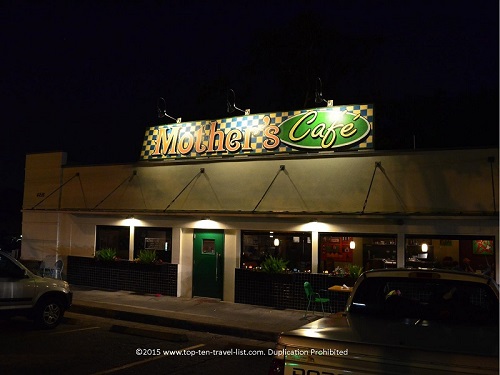 Mother's Cafe is a classic Austin vegetarian restaurant that has been serving fantastic vegan and vegetarian food since 1980. Weekend brunch as well as daily lunch and dinner is served.

Everything on the extensive menu is vegetarian. In addition, most items can be prepared vegan or gluten-free, and sometimes both. Soups, enchiladas, burritos, and sandwiches comprise the majority of the menu. On the weekend brunch menu, you will find omelets, french toast, as well as gluten-free and vegan selections.

The enchiladas are a great pick for anyone as they can be made both vegan and gluten-free. A corn based tortilla is used for these dishes, or you can pay extra for wheat (so for once those that are GF will actually pay less for a dish!). In addition, tofu or vegan cheese can be substituted for the regular cheese. Vegan/GF sauces include ranchero, verde, or a spicy chipolte cashew.

The Spinach Mushroom Enchilada, stuffed with spinach, sauteed mushrooms, red onions, vegan cheese, and the spicy chipolte cashew sauce was a real treat. If you are vegan, you will love the ability to order your favorite traditionally off limit Mexican dishes in their veganized versions.

Entrees are served with black beans and organic brown rice. Each table also receives a complimentary basket of chips and salsa. This is the first time I have seen any vegan or vegetarian restaurant provide a complimentary treat, so this was a nice bonus.

Prices are very affordable based on the portion sizes. For example, the enchiladas are priced at $9.50 and this includes beans, rice, and chips and salsa.

Our waitress was kind and professional and did not rush at all even though we arrived 15 minutes prior to closing. She seemed very knowledgeable about the entire menu, including gluten-free and vegan substitutions.

The dining area is attractive with lots of plants and artwork. Overall, the area was comfortable and not too noisy. 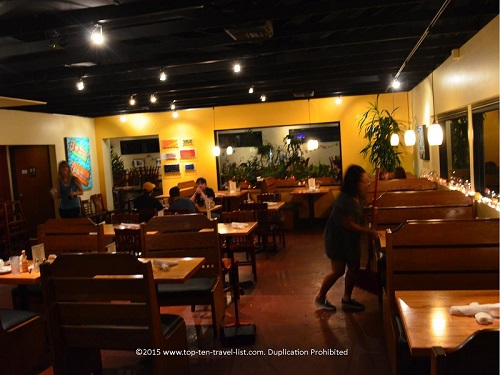 Mother's Cafe is the perfect choice for the vegan/GF diner craving a fantastic Mexican meal. It's not too often that you find a Mexican restaurant with vegan cheeses and sauce on hand, as well as gluten-free tortillas and side dishes.

Any vegan and gluten-free diners, as well as anyone else looking for relaxing organic Mexican meal, be sure to take advantage of this local treasure on your next visit to Austin.