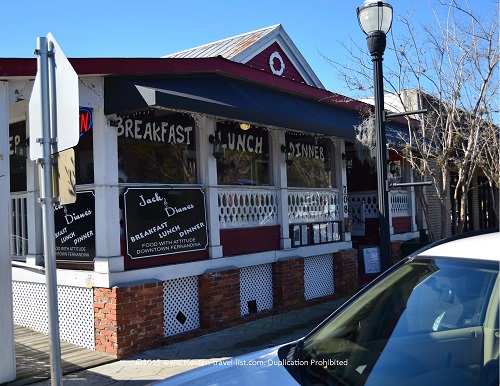 Those following a gluten-free, vegan, or vegetarian diet will want to head straight over to Jack and Diane's for a delicious assortment of all different types of food for every diet.

Just walking around Fernandina Beach's downtown, you may just miss this little gem as it is not located near popular attractions. Despite some negative reviews, I was quite pleased with the service, food, and charming setting of Fernandina Beach's best gluten-free and vegan restaurant.

Jack & Diane's offers an extensive menu of breakfast favorites, soup and salads, appetizers, lunch entrees, and more on their multi page menu. They have an enormous selection of menu items that can be customized to be made gluten-free; one of the best menus I have seen in this area of Florida.

Contrary to most restaurants where you may find 1 or 2 items you can eat, Jack & Diane's offers a plethora of options in every category, even appetizers and side dishes. At least 2 gluten-free and vegan soups were offered. All salad dressing were okay. In addition, there were plenty of specialty dishes available such as Vegan and gluten-free pancakes, gluten-free pasta, and a great vegan rice dish.

The staff was more than willing to make substitutions based on your dietary preferences, with no added charges, which was definitely a refreshing change.

One of the soups of the day was a delicious gluten-free and vegan veggie soup, which had a fantastic chilli like consistency and slightly spicy flavor.

You will find an assortment of salads and wraps on the menu, which can be customized to fit any diet. The brown rice based gluten-free wraps were great; they didn't break apart like some of the gluten-free wraps on the market. The Triple Play deals includes a chicken based wrap, cup of soup, and salad for only $10. The wrap and soup were both excellent, although the side salad was a bit of a disappointment.

An excellent appetizer for every diet is the Momma's Nachos plate, customizable to include any toppings you wish (black beans, sauteed mixed peppers, cheese, sour cream, cilantro lime sauce, meats and seafood and guacamole are just a few of the selections available). Because there are so many choices, it is easy to create a vegan or gluten-free version.

Jackie Brown's Black Beans & Rice is a perfect option for vegetarians. It's a filling rice based dish filled with tomatoes, onions, and greens. The slightly spicy flavor gives the rice dish a great kick.

The breakfast menu is huge and offers many vegan and gluten-free options in addition to traditional favorites. With the nice outdoor patio, it would be the ideal weekend brunch destination. By offering a little something for everyone, Jack & Diane's opens the door for shared dining experiences between gluten-free and non gluten-free family members and friends.

We experienced no cross contamination issues and were more than pleased with the attentiveness and knowledge of the staff. It's nice to dine at a restaurant where the staff is aware of all the ingredients the chef uses and actually has some background information on the vegan and gluten-free diet.

Another advantage of dining at Jack & Diane's is a clearly marked gluten-free menu. Items which can be made gluten-free are marked as so, which means less questioning on your part. Vegan items are not marked, however, many items can be made vegan by omitting certain sauces, cheeses, and condiments. Perhaps they will add vegan menu markers in the future.

Portion sizes were adequate and prices were very affordable considering there was no up charge for gluten-free substitutions.

Service was great. Our waitress was more than willing to make any substitutions to make our meals both gluten and dairy-free. She did not charge anything extra and even made a few suggestions herself. It was clear that the waitstaff deals with special diet customers all the time.

The casual setting is perfect for relaxed dining with your family and friends. It's not a restaurant where you feel rushed out, but rather one where you can enjoy your meal and the day. Pets are allowed on the outdoor patio, which is always a benefit for those traveling with their beloved furry friends.

In a sea of fried food and seafood based restaurants on the island, Jack & Diane's stands out as a healthier alternative, for both those with food allergies and anyone else looking for a healthier meal.