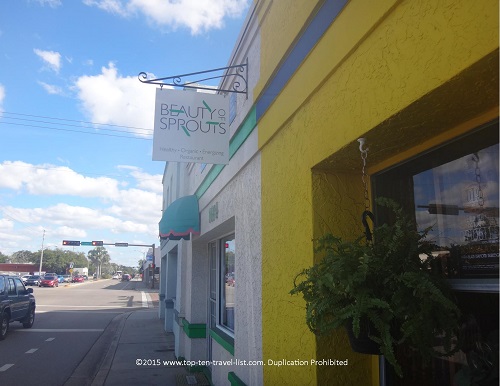 Beauty of Sprouts, a vegan, mostly raw restaurant in Sarasota, caters to those following vegan, gluten-free, and raw food diets. Head Chef Ramo was trained at the Moscow Professional Culinary College and has worked at many upscale restaurants in New York City.

As Sarasota sorely lacks in terms of vegan/gluten-free restaurants, it is nice to know that a few new choices are beginning to spring up. Unfortunately, Beauty of Sprouts is quite expensive and the dishes are not as appetizing as other more established vegan restaurants in the country.

If you like raw food, then you will enjoy the many varieties found on Beauty of Sprout's menu, however, you should expect steep prices and minuscule servings. In my opinion, the prices did not justify the quality nor quantity of food. The food was average at best. I have experienced much better food at other raw restaurants in other cities across the country.

Maybe I am just not a fan of raw food? I prefer a treat every once in a while when dining away from home, and the bland, small servings at Beauty of Sprouts just did not feel like a treat to me.

Here is a sample of some of the items you will find on the menu. Appetizers include options such as Flax based crackers with guacamole, coconut wrapped spring rolls stuffed with avocado, sprouts, and tomatoes, and butternut squash ravioli with coconut cream. While these all sound pretty good on paper, unfortunately, most items we tried were mediocre at best and expensive to boot.

The spring rolls were pretty good, although $9 for 2 is severely overpriced (4-5 would have been a fair price). The ravioli was incredibly overpriced and honestly not that good.

If you want great raw ravioli, try the Nut Butter Squash Ravioli at Organic Garden Cafe in Beverly Massachusetts, the best of its' kind, a delicious beet stuffed shell filled with squash and covered with a creamy cashew based sauce. Once you have had something this tasty, the ravioli at Beauty of Sprouts really pales in comparison.

A few raw soups such as Raw Chilli and Gazpacho are on the menu. As I prefer soup hot, I decided to skip out in this department.

Entrees include options such as Lasagna with zucchini, cauliflower and a nut based cheese, Pad Thai with mixed veggies, kelp noodles, sprouts and a coconut based dressing, and a Taco salad with mixed greens, salsa, guacamole, and lima and fava beans. The salad was just okay, definitely not worthy of the $13 price tag.

Desserts include a lavender creme brulee, tiramisu, and an apple pie. Because we were already dissatisfied with the portion sizes and sub par quality of the food, we opted to skip dessert.

Service was friendly, although it was a bit strange that the owner made you write your own order. Food came out very fast, in less than 10 minutes. If you need to get in and out for a quick lunch, you should have no problem here.

The dining room is pretty simple with a fresh bright design. It is cheerful and sunny. However, the seating is pretty limited, so I am not sure how the restaurant would handle a busy afternoon. 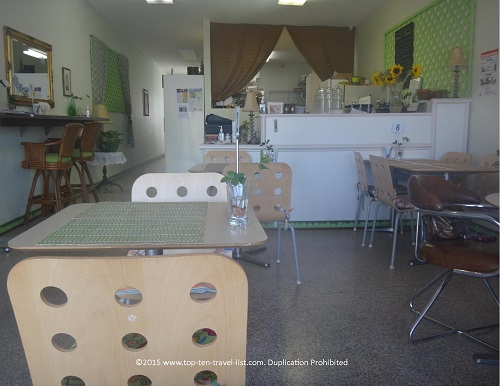 Overall, Beauty of Sprouts might be a good option for raw vegans who don't mind shelling out a lot of money for an average meal. If you are a die hard fan of vegan restaurants, you may simply appreciate the ability to dine out at this rare vegan option in Sarasota.

Personally, I would rather make the healthy food myself at home or enjoy a meal at a more lively restaurant.