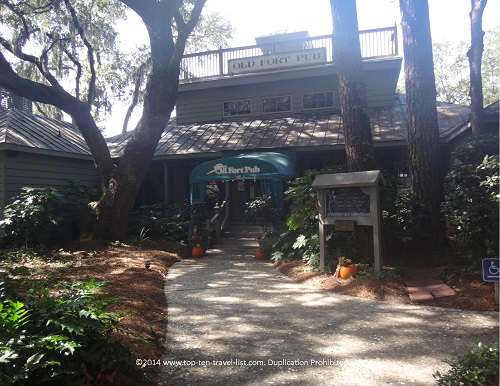 Old Fort Pub, located on beautiful Hilton Head Island, is a favorite amongst tourists and locals alike due to the wonderful location on the water. The prime advantage of dining at Old Fort Pub is the amazing view from every table. There is not a bad seat in the house!

Unfortunately, contrary to the amazing views, the restaurant disappoints with poor service, unprofessional management, and an unaccommodating chef. With a few improvements in the service department, along with a more allergy friendly menu, Old Fort Pub could be one of the better dining options on the island.

Brunch at Old Fort Pub included a Chef's Omelete of the Day (seafood), Chef's Quiche of the Day, Lowcountry Style Shellfish Cake, Wild Local Shrimp and Grits, and a variety of other traditional and seafood based dishes.

We ordered a Veggie Omelette (served with potatoes and fruit)and the Sea Island Breakfast Plate (2 scrambled eggs, potatoes, fruit, and your choice of meat). A complimentary bread basket consisting of Southern buttermilk biscuits and danishes is offered.

Although I gave the restaurant advance notice, the chef was unable to accommodate any dietary requests, including cooking a separate batch of breakfast potatoes in oil as opposed to butter, which seems like a pretty easy, reasonable request. They also had no gluten-free bread on hand even though I requested it in advance, and was told that it would not be a problem.

We were given a side salad with our eggs in replace of the potatoes, however, it was not a fair substitution. Who wants to eat a salad with eggs?

Although the chef was able to make a veggie omelette as opposed to the chef's special of the day, we were unjustly charged the same price as we would have been for the seafood based omelette. Obviously, the veggie omelette with a few pieces of lettuce should be charged less than a lobster based omelette with potatoes. Not to mention that we also skipped the bread basket and the meat side on the breakfast plate.

The food was reasonably good, although overpriced, and more importantly not what we wanted.

Service was professional and prompt, although not particularly friendly. Our waiter did not offer any suggestions in place of the bread and offered no discount for the veggie omelette.

Management was very rude when we discussed the situation. Although we contacted the restaurant over a week in advance and received a reply from the owner, the restaurant was unable to accommodate our simple dairy and gluten-free requests. The manger refused to acknowledge the advance request for the dietary substitutions and even suggested that we give them advance notice in the future, which was completely unprofessional in my opinion.

Admitting that you made a mistake is a much better way to handle the situation. If the manager would have just apologized, my perception of the restaurant would have been much better. On a side note, every high end restaurant should carry a few gluten-free and dairy free substitutions items on hand, as these are 2 ever increasing sources of food intolerance. Gluten-free bread can be frozen up to 6 months and oil is an easy substitute for butter. A few small changes in the kitchen opens up the restaurant to many new customers.

The setting for brunch at Old Fort Pub can't be topped. The tremendous views of the water provides such a relaxing setting, one that makes brunch an even more pleasant experience. Tables are beautifully set up and food is presented elegantly. This is no ordinary brunch, it's brunch with incredible views! 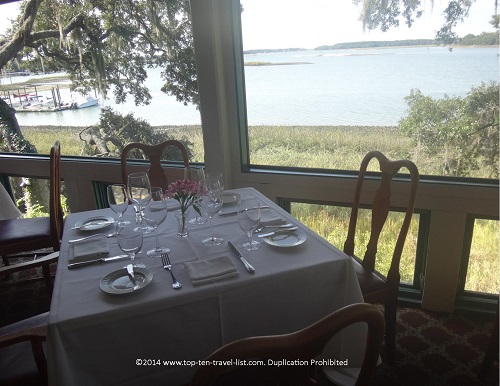 Unfortunately, our experience at Old Fort Pub was mediocre at best. We expected great service and great food to match the amazing setting. Hopefully, Old Fort Pub will hire new staff that actually care about their customers. I can only hope that if I ever decide to visit Old Fort Pub again on a future vacation to Hilton Head Island that the service will match the extraordinary setting.