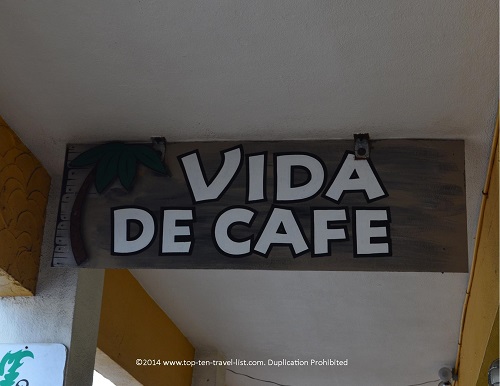 Advocates of a raw food diet claim to have increased immunity, more energy, and an overall feeling of well being. For those who are new to the diet, a visit to a raw food restaurant is an excellent opportunity to test out a variety of delicious homemade raw dishes.

At Vida De Cafe, you can try out a tempting array of new and different, yet appetizing entrees. Oftentimes preparing raw food at home is a real hassle, therefore, visiting a restaurant until you learn to comfortably do it yourself is a smart move.

Everything on the menu is gluten-free except for the barley chili. In my opinion, the restaurant should replace the soup, as it would be less confusing to customers and more reassuring for those with cross contamination issues.

The special of the day, a Mushroom Tostada, was a tasty gluten-free vegan version of a traditional crunchy taco: an onion based tostada shell piled high with lettuce, guacamole, mushrooms, lettuce, salsa, bell peppers, corn, and a chipolte ranch dressing.

The tostada was pretty good, although, if I ordered again I would replace the Chipolte ranch dressing with extra guacamole as I wasn't too keen on the taste of the ranch. Also, the mushrooms were a bit too salty for my taste.

The Sicilian Lasagna was a delicious raw vegan alternative to traditional lasagna. The texture and flavor were similar to regular lasagna, with the advantage of the dish being raw, and thus, more alive with beneficial nutrients.

The highlight of the menu is an absolutely delicious Fudge Brownie with Choco Chip Ice Kream. This rich moist chocolate brownie is topped with a creamy scoop of cashew and coconut based ice cream. The Key Lime Cheesecake was also good, although would have tasted better if served slightly frozen as opposed to completely thawed out.

Service was excellent, professional, knowledgeable and very friendly. The wait for the food was not long at all. We had a slight problem on our first visit, and the manager invited us back for a free dessert!

The small interior of the restaurant has a beachy theme, although it could be more interesting with the addition of a few more decorations (maybe a few palm trees?). The outdoor seating is limited to one table. The highlight here is the proximity to beautiful Pass-a-Grille Beach, located just across the street. 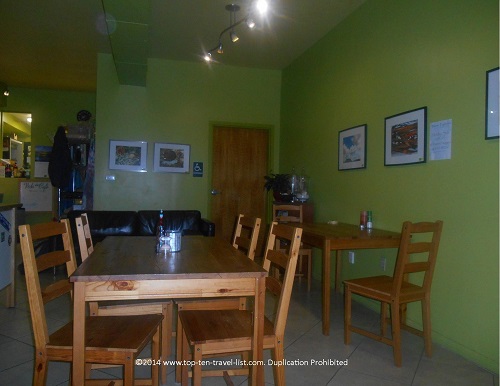 Overall, Vida de Cafe is a great choice for beach-goers looking for a healthy meal or something out of the ordinary. Instead of filling up on greasy fried foods after your day out in the sun, treat your body to nutritious, raw meal that actually tastes good!