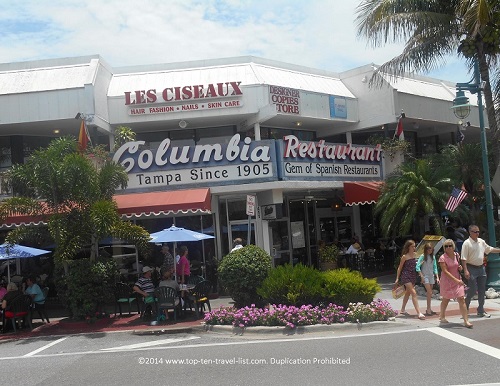 From its beginnings in Tampa’s Ybor city in the early 1900's, Columbia has now expanded to include 6 different locations throughout Florida. The Sarasota location is especially attractive as it is located in the bustling St. Armand's Circle dining and shopping area.

Ingredients included in the tableside “1905" salad include meat (ham), veggies (iceberg lettuce, tomatoes, and olives), Swiss and Romano cheese, and garlic dressing. The salad is very popular. In fact, USA Today rated it "One of 10 great places to make a meal out of a salad."

Columbia’s Black Bean soup is an amazing mix of white rice, black beans, and Spanish onions. A large bowl just wasn’t enough! I would visit again just for this delicious soup. In fact, I started making this soup myself at home at least once a month after visiting this restaurant!

Two pages of Tapas selections are available. Tapas are small plates which can be shared with the table and/or combined to form a meal. There are so many mix and match dishes available on the Columbia menu that it is hard to limit your selections to just a few! A few examples of tempting options include everything from vegetarian black bean cakes to devil crab croquettes.

Columbia offers a special deal in which you can order 3 tapas (including one seafood option) for a special price. This is an excellent idea for sharing diverse dishes amongst a small group of people. The ability to mix and match several different options is great for those picky eaters who cannot decide what to order.

An option for almost every dietary preference is included on the menu. At Columbia, you will find a separate menu for each major dish: chicken, meat, shrimp, seafood, vegetarian, and paella (a Spanish rice dish).

Vegetarian dishes are conveniently marked so guests do not have to feel awkward asking in the restaurant. In addition, several menu items can be made vegan (Paella Vegetariana, Cuban Black Bean Soup, and Black Bean “1905.” A gluten-free menu is also available online as well as by request in the restaurant.

If visiting during lunch hours, be sure to check out the Chicken and Yellow Rice “Ybor,” an appetizing mix of yellow rice, peppers, onions, tomatoes, spices, and olive oil topped with one quarter chicken.

The drink menu is extensive. A Sangria compliments any meal. A take home hand painted Sangria pitcher is available if you would like a souvenir to commemorate your visit.

Service was a bit slow, although the restaurant was extremely busy, both inside and out. There were dozens of waiters; however, they were struggling to keep up with the high demand.

The Sarasota location offers a beautiful location right in the middle of St. Armand’s Circle, an upscale dining and shopping neighborhood. Both indoor dining and an outdoor covered patio with ceiling fans (for those unbearably hot Florida afternoons) are offered.

The atmosphere is fantastic, whether you choose to sit indoors or outdoors. The patio is a bit more casual, while the indoor dining area is a bit fancier with lush plants and attractive artwork. 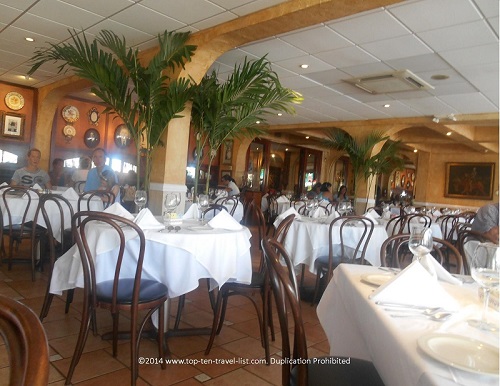 Columbia is the go-to spot for Spanish/Cuban cuisine in Sarasota. At Columbia, you will be treated to great tasting Spanish fare in a welcoming, upscale casual Mediterranean atmosphere.