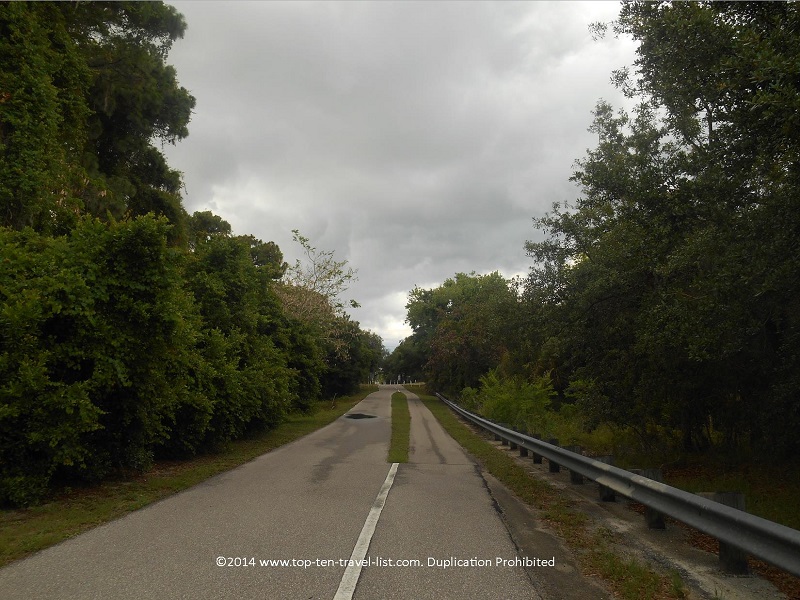 This weekend, Mike and I embarked on the 11 mile journey from Dunedin to Tarpon Springs, Florida via the popular Pinellas Trail biking/walking path. The entire journey is 40+ miles (starting in St. Petersburg and ending in Tarpon Springs), however, we felt like taking a leisurely Saturday ride. Nothing too intense, especially since we are not used to the hot and muggy Florida temperatures. Plus, we had heard that this was the most scenic portion of the path. 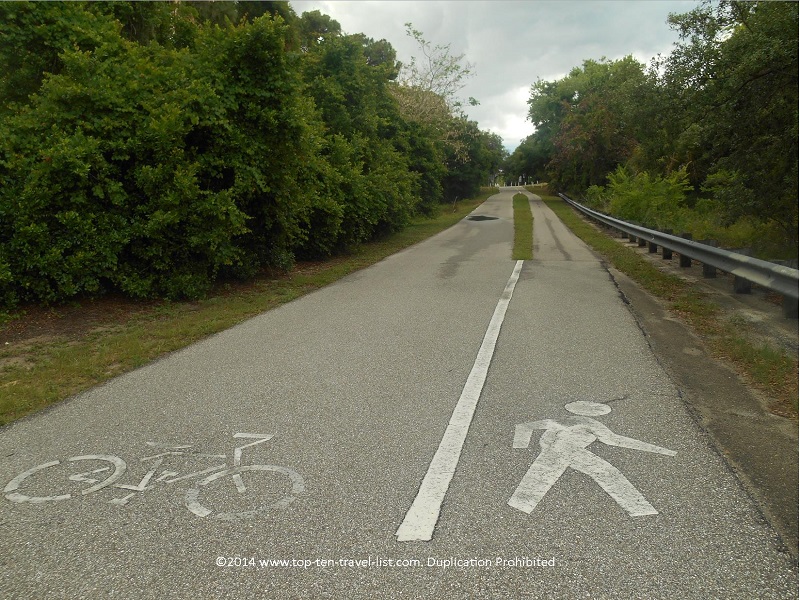 The Fred Marquis Pinellas Trail is a multi-use paved path which follows the course of an old railroad. For those unfamiliar, many cities transform former railroad routes into good use, by way of a recreational path. Communities benefit with beautiful, often lengthy recreational paths, which can be used both for commuting and leisure.

We have checked out several other rail trails in the country, including the Cape Cod Rail Trail (Cape Cod, MA), the Minuteman Trail (Suburban Boston), the East Bay Bike Path (Providence, RI) and the Erie and Ohio towpath (Cleveland, OH). The Pinellas trail has earned a place amongst the Rail Trail Hall of Fame, a distinction given to the best trails (deciding criteria include: amenities, scenic views, maintenance, historical significance, and usage).

We began the route in downtown Dunedin, an ideal place to start and end your ride. An abundance of restaurants will give you options for fueling prior to the start, or refueling after your finish. Downtown Dunedin is a quaint historical shopping and dining area. I recommend taking a walk around town either before or after your ride. You can also head over to the marina and check out one of the waterfront restaurants. 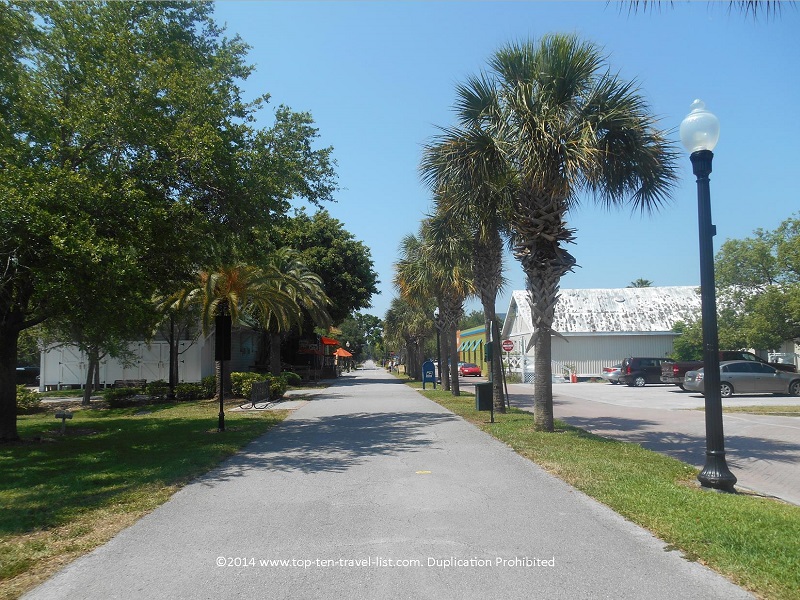 After passing the charming downtown area, the route passes a few busy highways and a lot of commercialization. I didn’t care much for this part of the route. As you can see in the photo below, this portion of the ride is not very scenic. 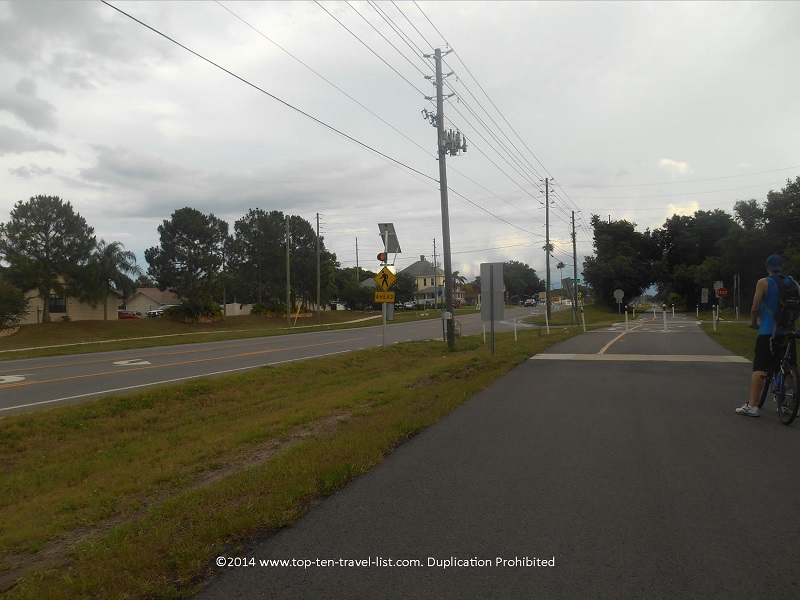 You have the option of taking a 2 mile detour to Honeymoon Island State Park, well known for its’ scenic beaches and natural hiking trails. The sunsets here are frequently rated amongst the best in Florida. I recommend taking the detour if you are up to it (as an added bonus admission to the park is much lower for cyclists than vehicles). Take a look below at one of the sunset photos we took at Honeymoon Island last week. 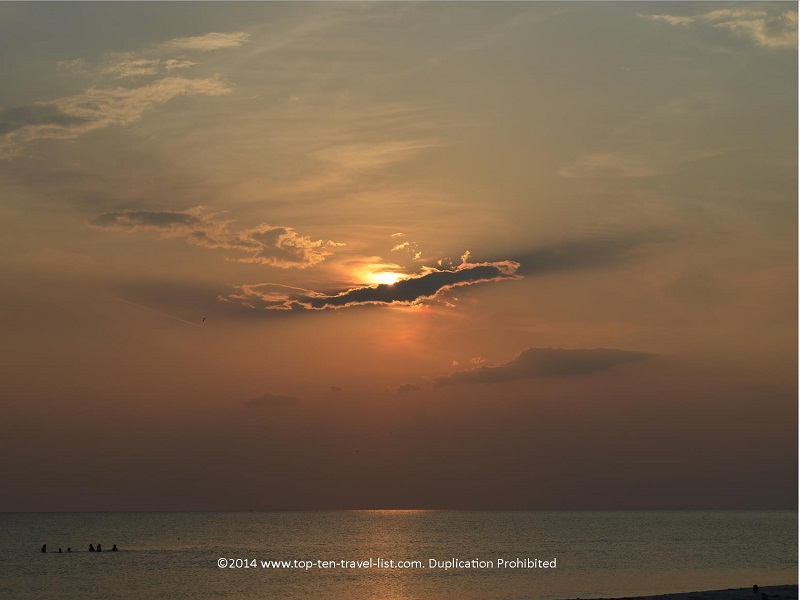 Most of the trail is flat, although you will pass one steep hill near the Dunedin section of the path. The hill takes you up to a highway overpass. From here, you will see mostly urban highway views, although there is a nice view of the water as well. 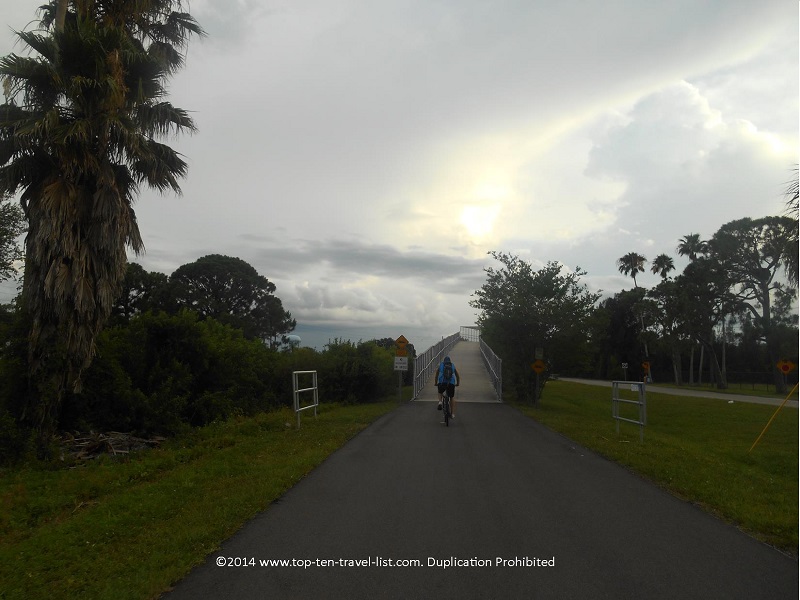 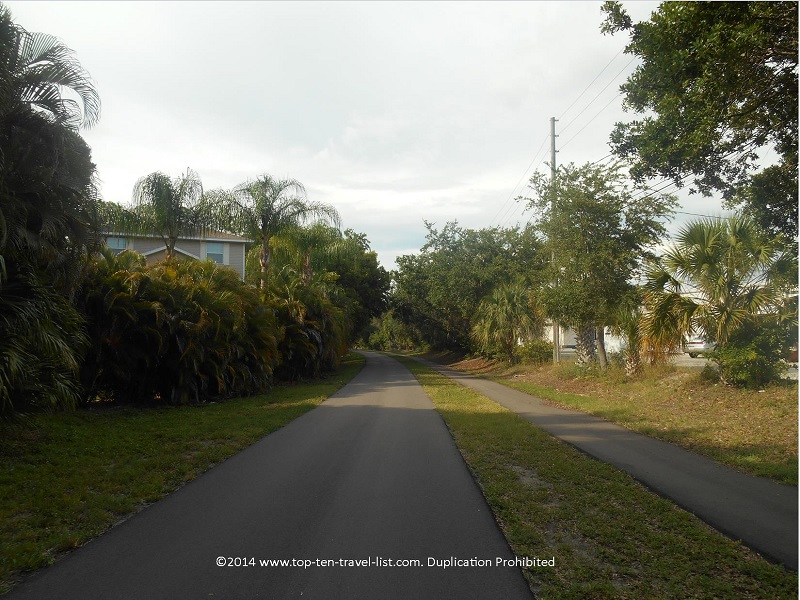 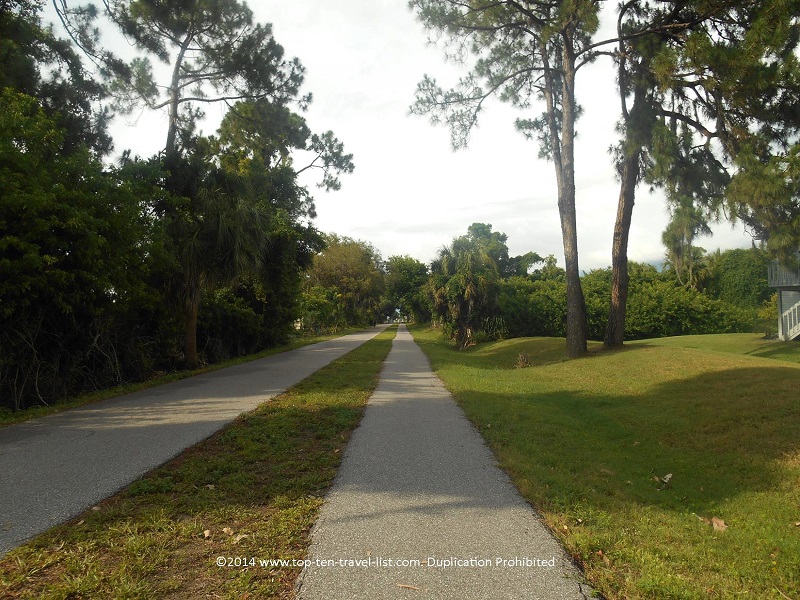 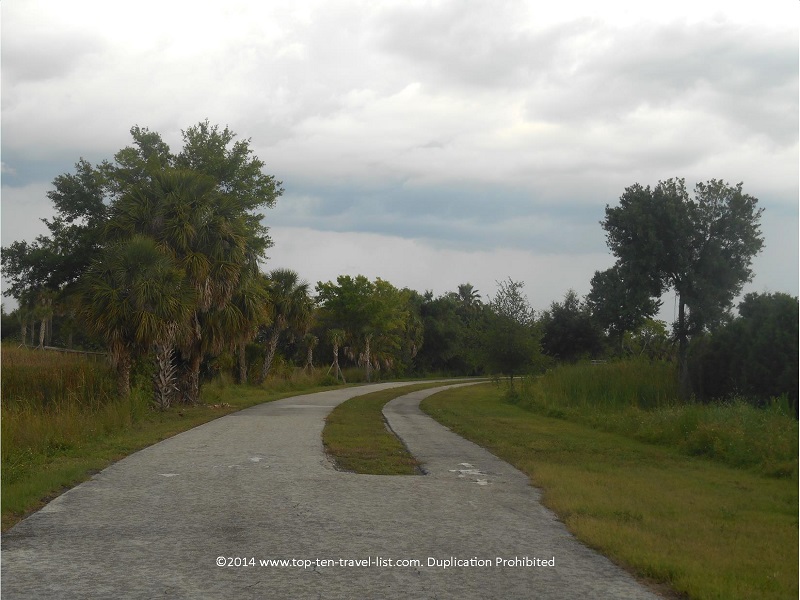 As you head into Tarpon Springs, you will enter the historic, scenic downtown area with beautiful palm trees lining the street. Tarpon Springs is one of the most tree-lined sections of the path. Outside of the downtown area, it feels like the most remote section of the trail. 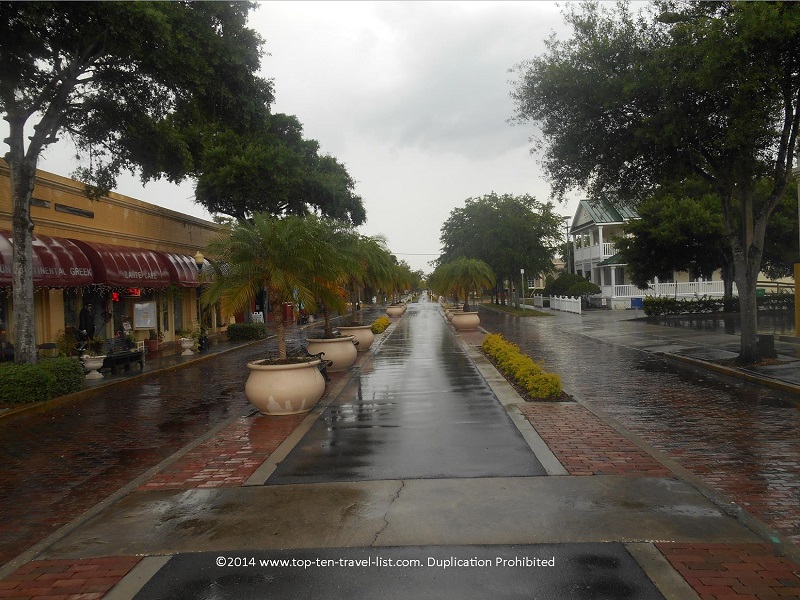 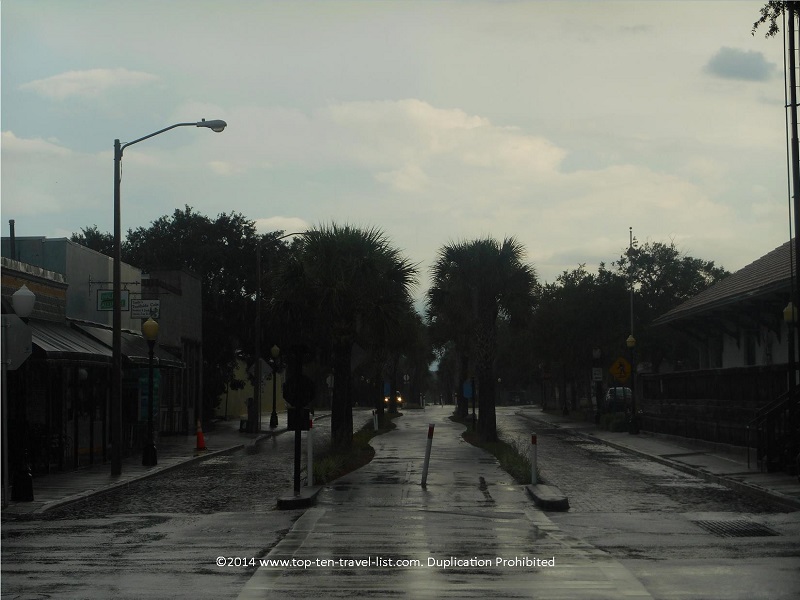 During our ride, we encountered one of the intense afternoon storms that frequent South Florida during the summer months. This is Florida – what do you expect!? It’s hard to plan lengthy exercise excursions here due to the random afternoon showers. I can say I have never seen so much rain in my life! We were absolutely drenched.

Luckily, we found a bridge to go under until the rain let up. In a way, we were glad for the rain as the temps helped to cool us down a bit (temps were in the low 90s). We are used to the cool temperatures of New England, so biking in the extreme heat was pretty rough. On a positive note, the thunderstorm made an otherwise bland ride a bit more interesting!

The dark storm clouds rolling in… 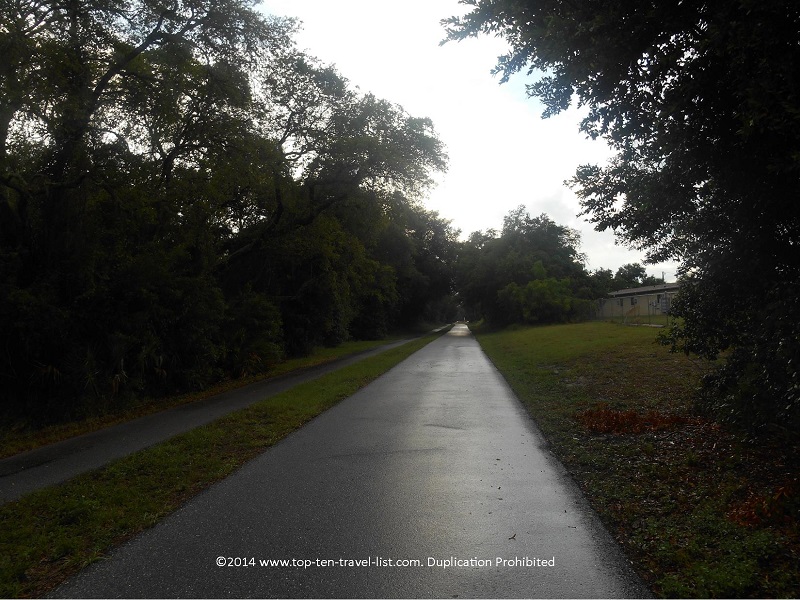 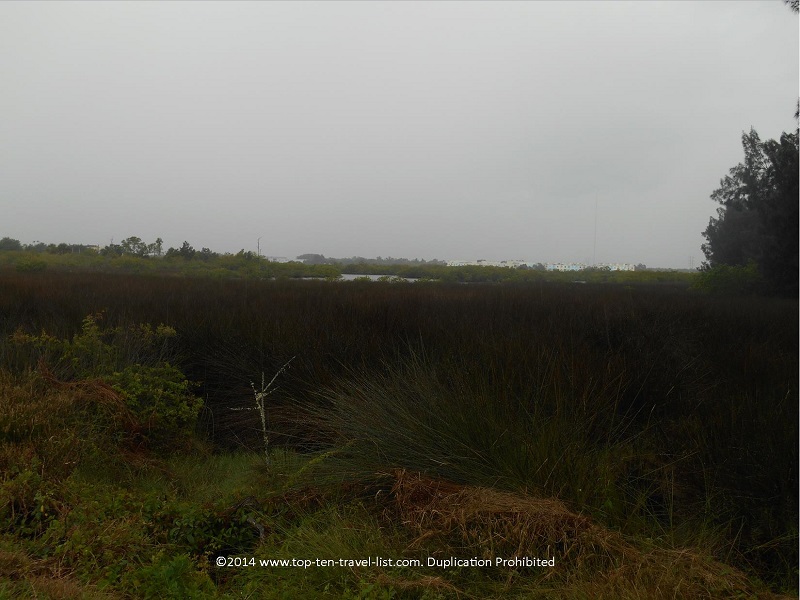 The Pinellas Trail would not make my list of top bike paths. I am actually quite surprised that it made the Rail Trail Hall of Fame, as I have encountered many more scenic paths. I felt like there were too many busy roads to cross and too many views of businesses, houses, and highways. I prefer the more rural rail trails over this very urban trail.

However, it’s a great way to get some exercise in for the day. And, the path is well maintained, clean, easy to follow, and conveniently split up into a separate biking and walking path in most sections. There are a few hints of nice scenery along the way, and the storm did add to the excitement.

Next up, we plan on completing the section from Dunedin to St. Petersburg. Be sure to check back often to get a glimpse at the rest of the trail.

Free parking is available in Dunedin on Main Street.

*Check the weather forecast for possible thunderstorms. Plan your trip in the morning for the least chance of running into a storm.

*Bring with plenty of water and a few snacks.

*Check the Pinellas Trail map and plan in advance how much of the trail you want to complete.

*Get a full bike tune up before your ride. There are plenty of places in the area to do so. In addition, most offer bike rentals if you don’t have your own.

*Consider taking the Jolly Trolley back to Dunedin if you do not feel like completing the return route. Tickets are only $4 for an all day pass.

Have you ever completed the Pinellas Trail? Any other rail trails? What is your favorite rail trail that you have completed thus far?

20+ Local Coffee Shops to check out in Tampa Bay

9 Fun things to do in Tarpon Springs: The Sponge Capital of the World

The Most Scenic Bike Paths in Tampa Bay

9 Things to do in Palm Harbor, Florida