Movies are a great way to explore places without actually being there. We get to see and do things we would never dream of from the comfort of our own home. Yet, sometimes a movie is so powerful that you find yourself wanting to run over and book a flight the second the screen begins to darken. Before Sunrise and Before Sunset are the best travel movies, in my opinion. Before Sunrise is the story of 2 strangers (one from American, one from Paris) who meet on a train in Vienna and spend a whole day together talking about everything under the sun. I was so intrigued by the city and almost felt as if I was transported into the film (definitely a sign of a quality film). Definitely one of my favorite movies of all time – I have never encountered such a deep, though provoking movie that made me even more inclined to travel. Surprisingly, I still haven’t made the trek to Europe. Hopefully, that will change soon! 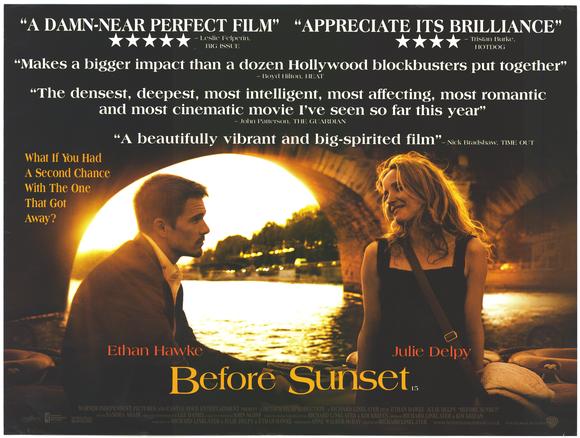 The sequel, Before Sunset is even more mesmerizing than the original. This time the characters meet 10 years later in Paris. The unique aspect of this film is that it is shot as one conversation and we get to catch glimpses of different parts of the city as the characters walk about and discuss life, love, and travel. The writing is honest, intelligent, realistic, emotional, and oftentimes witty. Yes, I want to visit both Vienna and Paris after seeing these beautiful films. I was so excited to find out that a 3rd film, Before Midnight is being released later this year. I can’t wait to see what the characters are up to now (18 years after the first film!). I am sure that I will fall in love with Greece this time around. What are your favorite travel films? Have any films inspired you to book a vacation?

“Travel does what good novelists also do to the life of everyday, placing it like a picture in a frame or a gem in its setting, so that the intrinsic qualities are made more clear. Travel does this with the very stuff that everyday life is made of, giving to it the sharp contour and meaning of art.” – Freya Stark