Last night, Mike and I dined at Spirito’s Restaurant in Providence for our Valentine’s Day Dinner. We frequently purchase Groupon deals for restaurants in the area and we both like Italian food so we decided to check this place out. Our Groupon deal consisted of $30 worth of food (we paid $15).

Sprito’s is located in an old house in the Federal Hill area of town. We made a late reservation for 8:30 and the place was still pretty crowded. We dined in the downstairs dining room which was a bit cramped and had an overall dreary feeling. The fireplaces and chandeliers were nice, but I felt like I was in a dark chamber. 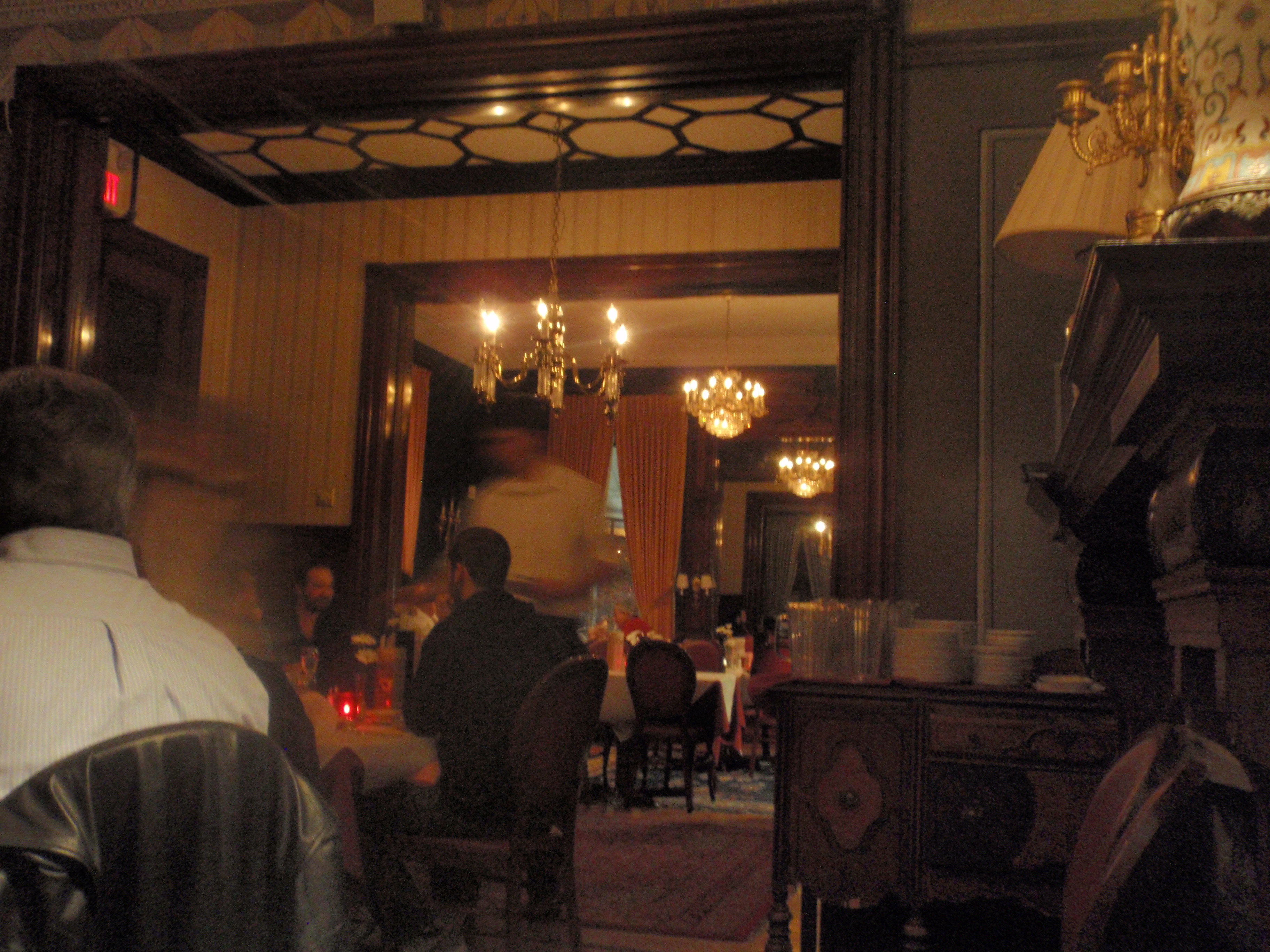 If you like darker settings, then you might appreciate the atmosphere more. I was hoping for something more upbeat and romantic. Later, I found out this used to be a funeral home! Nice place for a Valentine’s Day Dinner 🙁

Menu prices were high for the quality of food and I am surprised that they did not offer whole grain noodles (most Italian restaurant have the option). Service was slow – we waited 10 minutes before anyone acknowledged us! The waitress was unfriendly and unprofessional and we barely got any drink refills. The waitress did not engage in any small talk or ask how our meal was which was surprising for an Italian restaurant.

Example of the bad service: after our first loaf of bread another staff member decided to ask if we wanted olive oil – why didn’t they bring it out right away? My boyfriend and I both had a small plate for our bread. The waitress asked if we wanted olive oil on our plate so we had to pick up our slice of bread for her to put the oil on (mixed in with crumbs) instead of her just bringing us out a fresh plate! Usually the olive oil is put on the center of the table for the couple to share. Felt a bit tacky to me!

I ordered the Pasta Capri which was a mix of penne noodles, mushrooms, artichokes and olives in a sherry wine sauce. It was OK although I prefer not to eat white noodles. It was definitely not worth the $16 price tag – for a plate of basic spaghetti with a few vegetables in it?? My boyfriend said his Chicken Marsala was just OK too (too dry). It was a big serving and I had leftovers, but what good are leftovers if the food isn’t that great? The salads were not horrible – very wilted and overloaded with dressing (that tasted like fish).

I was expecting the restaurant to maybe have a few Valentine’s Day decorations up, but nothing. It didn’t even feel like we were dining out for a special occasion. Add in that our food took forever, our waitress was not attentive, and the food was just average didn’t exactly make for the best Valentine’s Day Dinner. I guess on the bright side our bill was only $6. I will not be dining again at Spirito’s – I am sure there are better Italian restaurants in Providence!

5 Things to do in Providence, Rhode Island