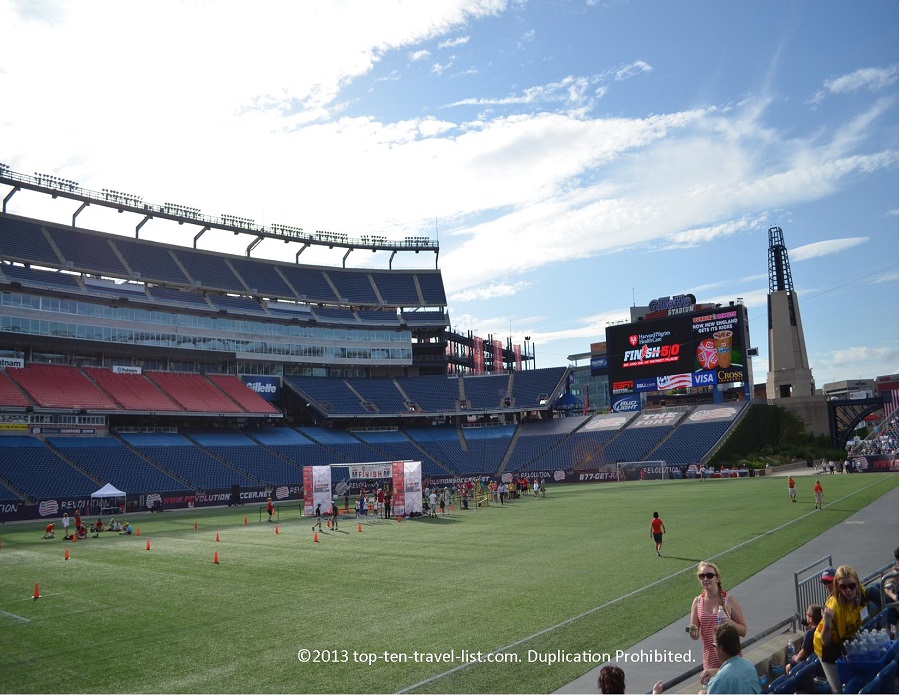 On Wednesday, I participated in a unique 5k race called Finish at the 50. This race is a must-do for any New England Patriot fan as you get to run directly onto the field at Gillette Stadium! Crossing into the finish line and seeing yourself on the giant 48 foot HGTV screen was a once in a lifetime experience! The race starts around the stadium. You will then proceed to run up the ramps, down the ramps, and end with a spectacular finish onto the field! 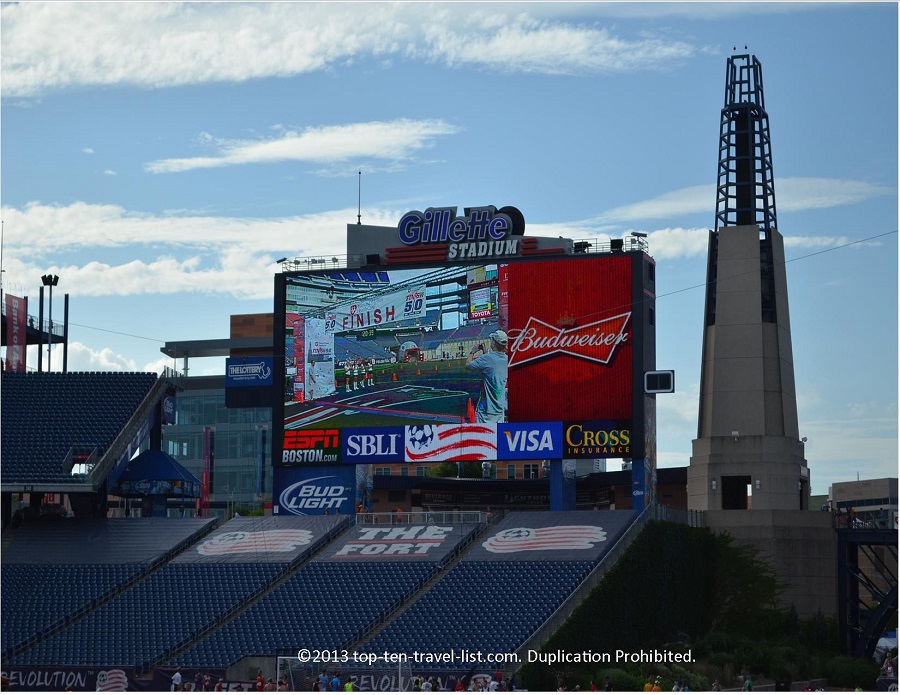 Going up the ramps was definitely the hardest part of the 5k – the incline is very high and turning for each ramp really slowed down my time.  I was expecting this to be a flat race as I didn’t look up much about it beforehand, so I was pretty surprised! It seems a lot of other runners were having a hard time with the ramps too. On the bright side, the views of the stadium were amazing!

Imagine running up these ramps in the 90+ degree heat! 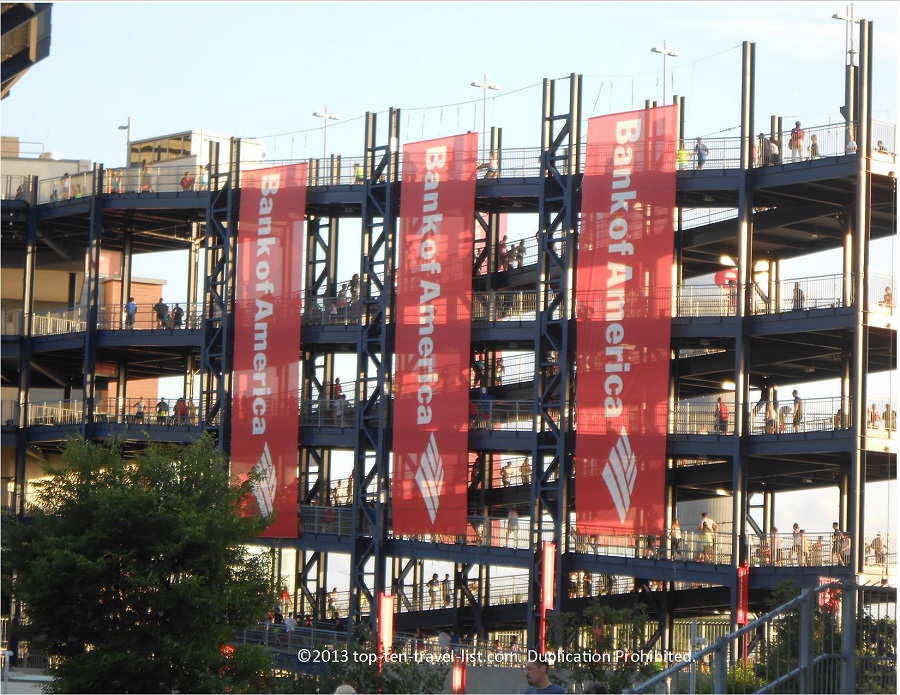 Take a look at a few of my photos from race day!

The Expo was really crowded, but there were plenty of free samples! 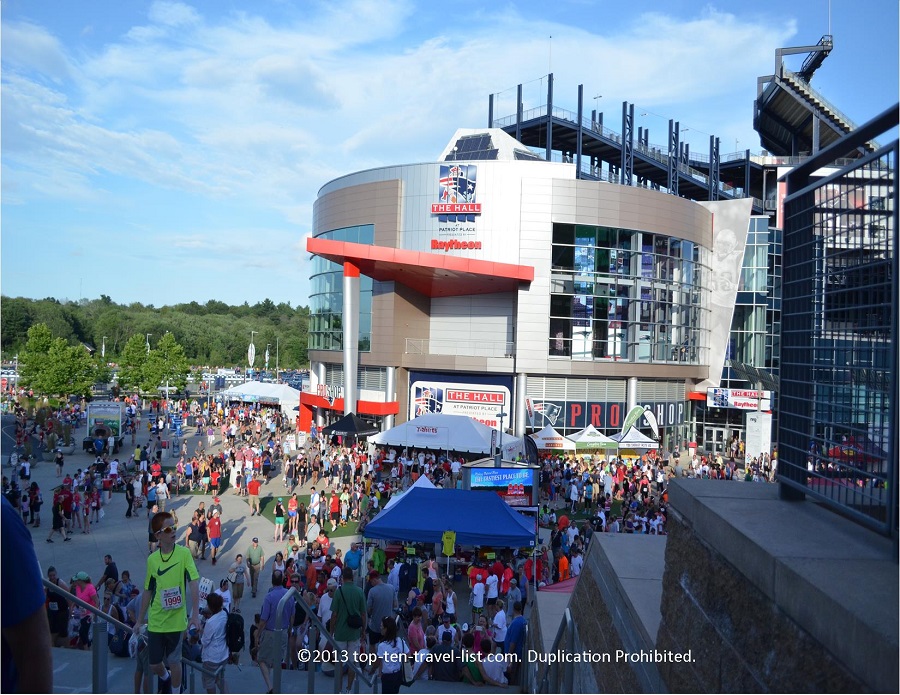 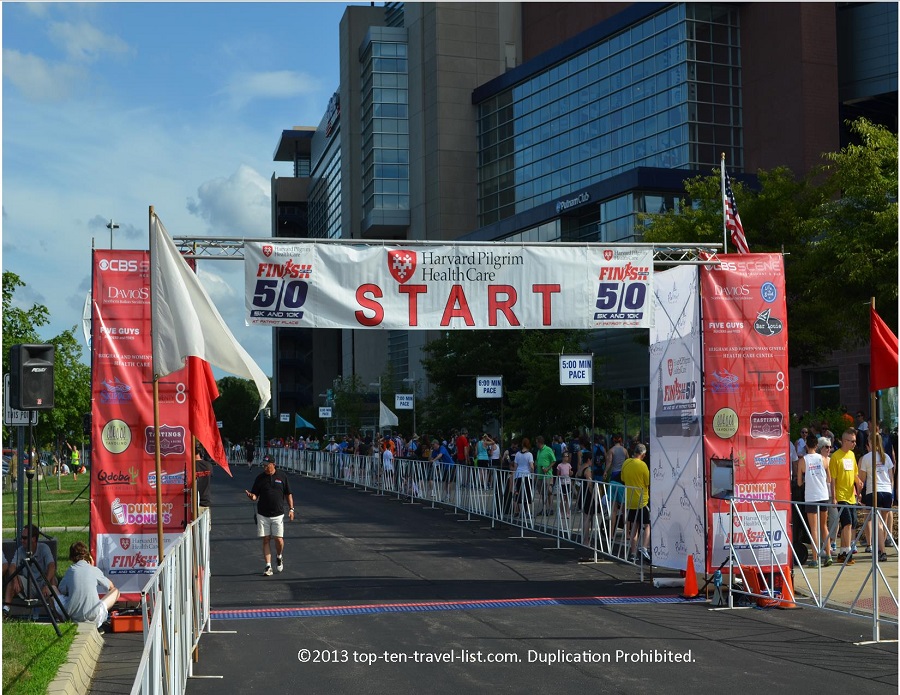 Getting ready by your pace group. The race is conveniently set up according to your expected pace. I started around the 8:00min pace! These pace markers are great because they prevent trampling and also help you reach your goal. 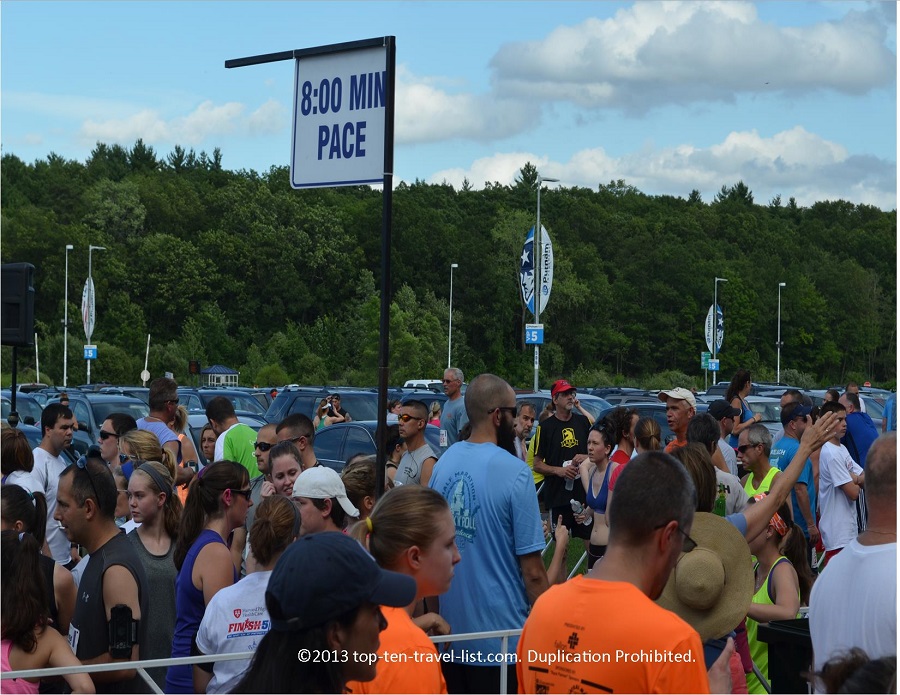 The front of the starting line… 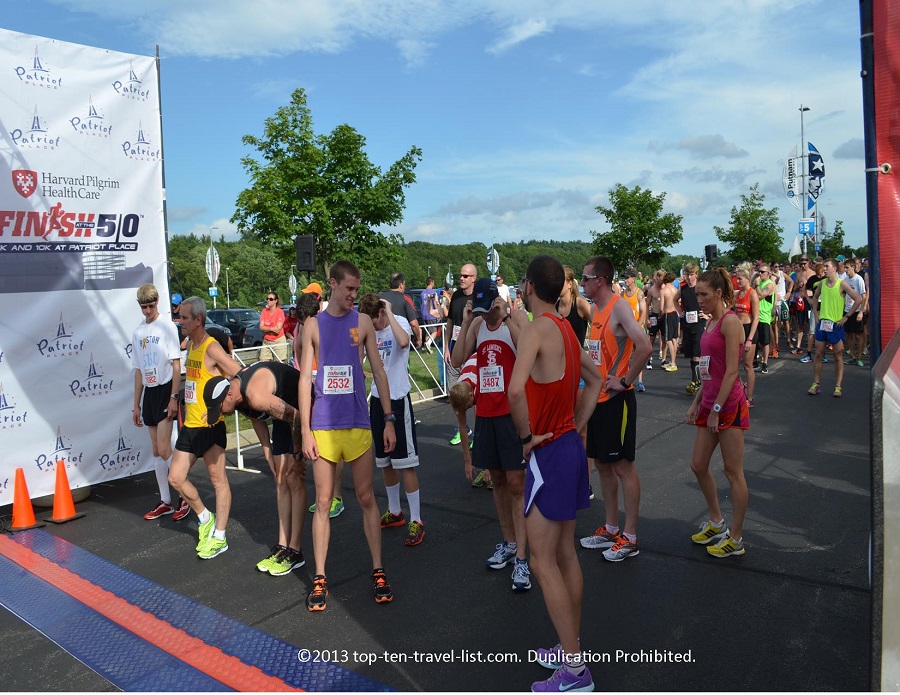 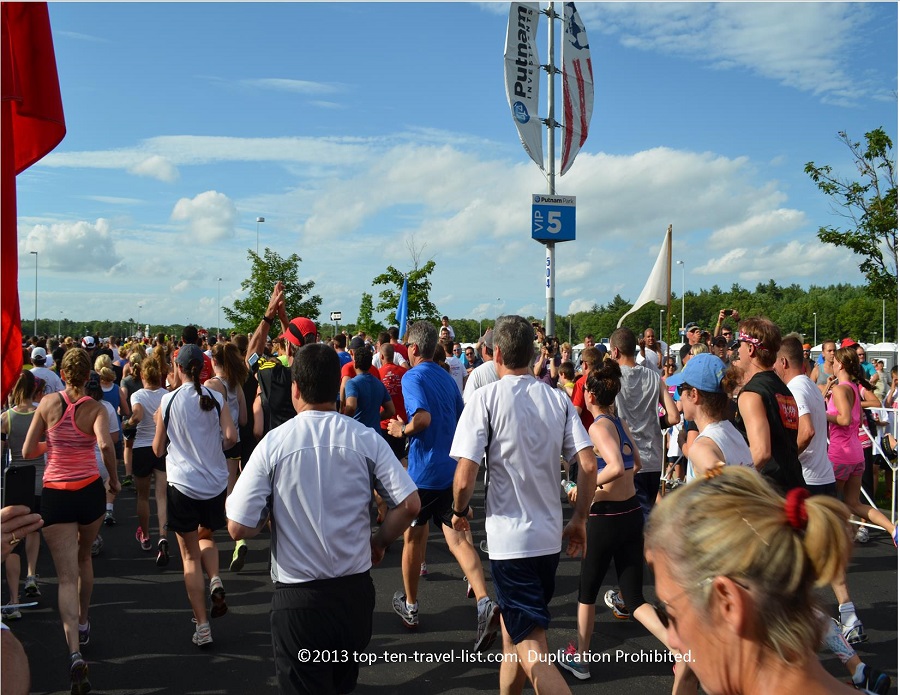 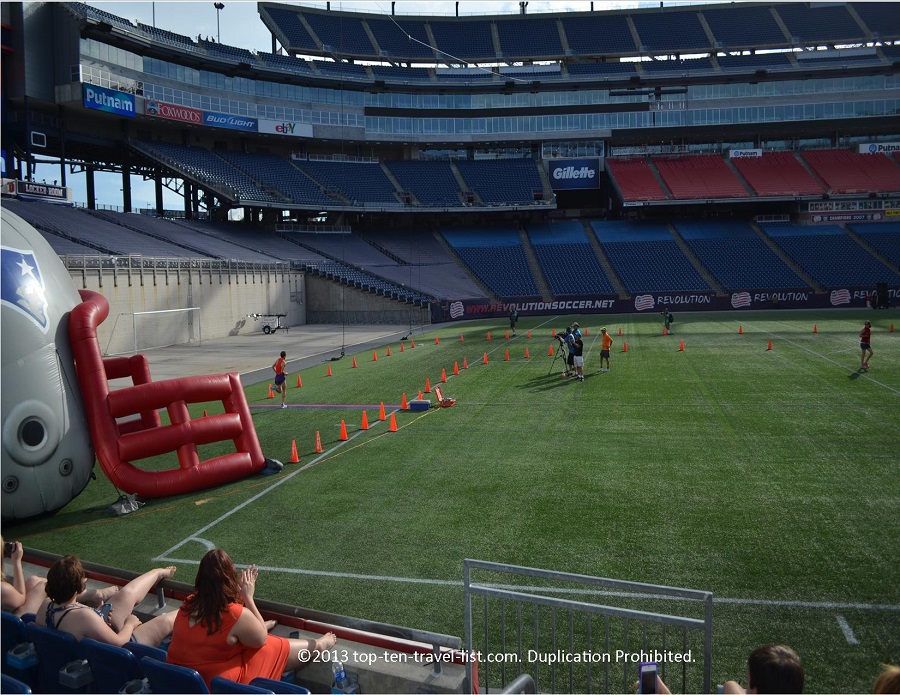 The last half mile or so of the race goes downhill on the ramps on the other side of the stadium. I needed this to pump me up for the finish line! After going up all those hills it was nice to gain a little bit of time going downhill. Next year, they could use another water station (there is only 1 stop and a second stop after the ramps would be nice!).

Your family and friends get to sit in the stands and cheer you on as you cross the finish line! 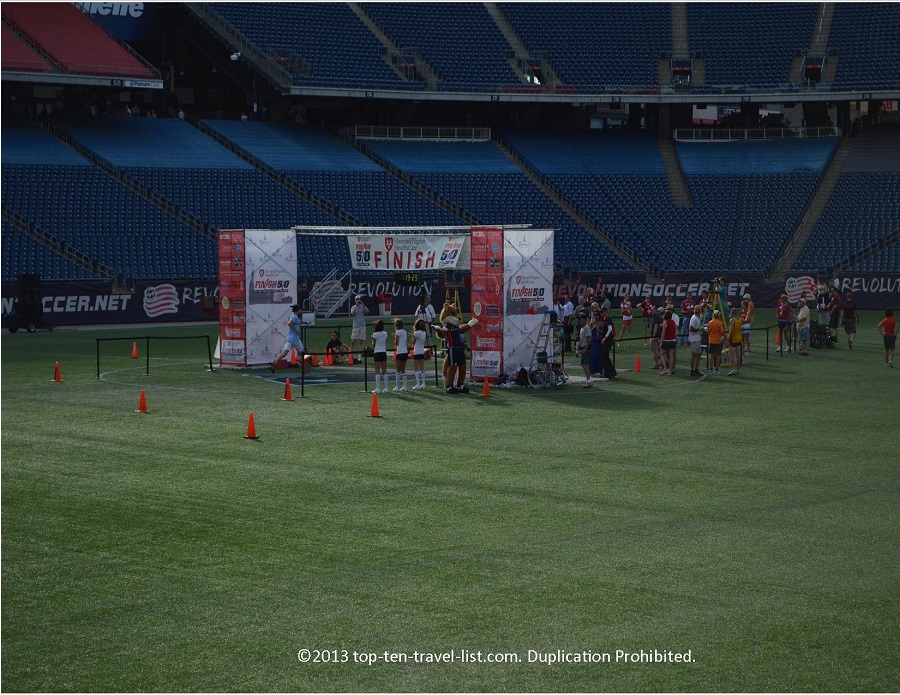 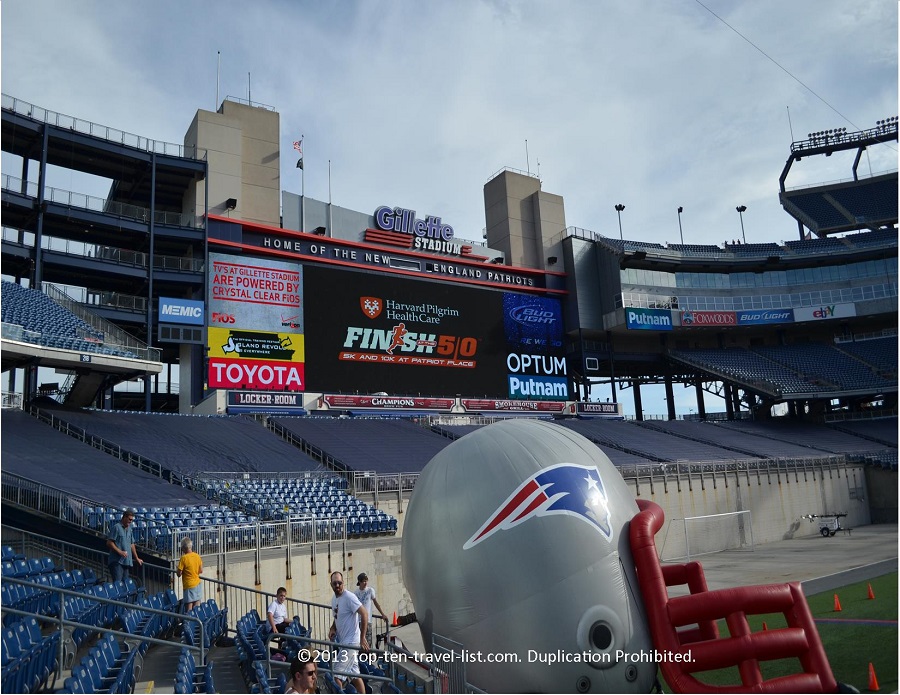 The Patriots mascot and cheerleaders cheer you on as you cross the finish line! Here’s a pic he let us take before the 5k. 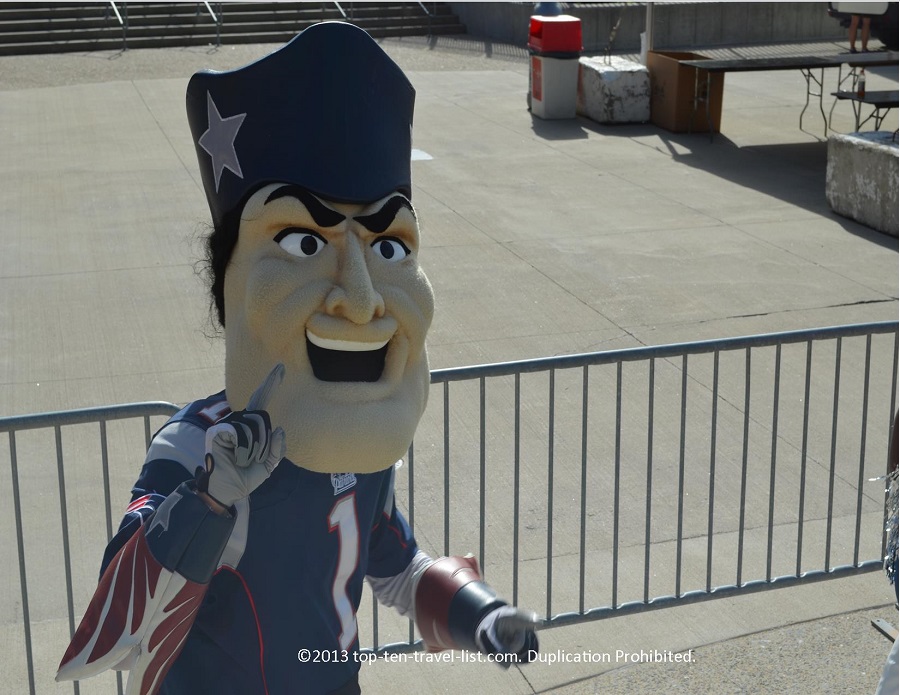 I highly recommend running this 5k race, especially if you are a New England Patriots fan. It was a unique experience to be able to run through the same tunnel that the players come out of during the games! It is also a great feeling to pass the finish line to  the cheers of thousands of spectators.

Chip-timed
Organized into pace groups
Great views of Gillette Stadium
Opportunity to see yourself on the big screen as you cross in the finish
Great restaurants and shopping at Patriots Place after the race
Great food samples before and after the race
Healthy snacks like organic salad and Whole Foods samples
Fireworks show after the race (not as good as I expected, but still worth staying around for)
Misting fans to cool off after the race

Ran out of small size T-shirts
No awards ceremony
Goodie bag wasn’t spectacular
Not allowing spectators on the field
A bit pricey ($40)
Not enough water stops (It was really hot out and we could have used at least one other stop on the 5k!)

Harvard Pilgrim Finish at the 50

100 Things to do in New England