Yesterday, Mike and I took the 2 and a half hour journey from Fall River over to Provincetown, which is the last city on the tip of Cape Cod. We mainly wanted to check out the historical sights (Pilgrim Monument), Commercial Street, and take some photos during a bike ride.

The Pilgrim Monument memorializes the first landing of the Pilgrims. At 252 feet tall, it is a pretty impressive sight. You will be able to see the statue as you arrive in town. You can also walk up the hill to get up close views or pay the $21 to climb to the top of the statue. Because of its’ statuesque beauty, we were able to view it from afar on a recent whale watching trip in Plymouth.

There are plenty of options for dining on Commercial Street, especially if you like seafood. It is a very diverse, eclectic area with shops and dining to suit any interest.

We chose a small restaurant called Purple Feather Cafe and Treatery. I ordered a sandwich named “The Bike Path” which was a combination of avocado, lettuce, tomato, onions, and hot peppers on 7 grain bread. A small bag of Cape Cod potato chips was included. The sandwich was decent, but not very filling.

Mike ordered the Baked Macaroni & Cheese, which he did not enjoy at all. The serving size was extremely small (possibly the smallest we have ever seen) and did not taste homemade. In addition, he was suspicious that it could have possibly been a microwave meal.

The dessert counter on the other hand looked very tempting. I would suggest coming in for a cup of coffee and dessert and skipping the overpriced lunch menu items. The indoor decor is nice and the staff was very friendly, so Purple Feather would make a nice place to stop for a relaxing drink.

After lunch, we decided to take a bike ride to better take in views of the dunes and ocean. The Province Lands Bike Path is a great way to get some hefty exercise in, along with take some great photographs. I thought based on the short distance that this would be an easy ride (as I often bike much further distances each weekend), however, this path was extremely hilly! I definitely got my leg workout in – no need for the Stairmaster! And make sure to bring bug spray because I got bitten several times by the biggest mosquitoes I have ever seen!

I highly recommend the path. The whole route is about 5.25 miles long, with the potential to go a few miles further if you take the Herring Cove or Race Point Trail extensions. You have the advantage of accessing either of these beaches if you feel like taking a break. The views are incredible, especially on top of the hills overlooking the ocean.

The views on this bike path consisted of the best scenery on our trip to the Cape Cod area. This path is very difficult, so make sure you are in decent shape before attempting this hilly path. Parking is free at the Province Lands Visitor’s Center.

We were unable to make it over to the beaches on this trip, however, I highly recommend checking out Race Point, as it consistently ranks among the country’s best beaches! It is also one of the only places on the East Coast where you can watch the sun set into the water! 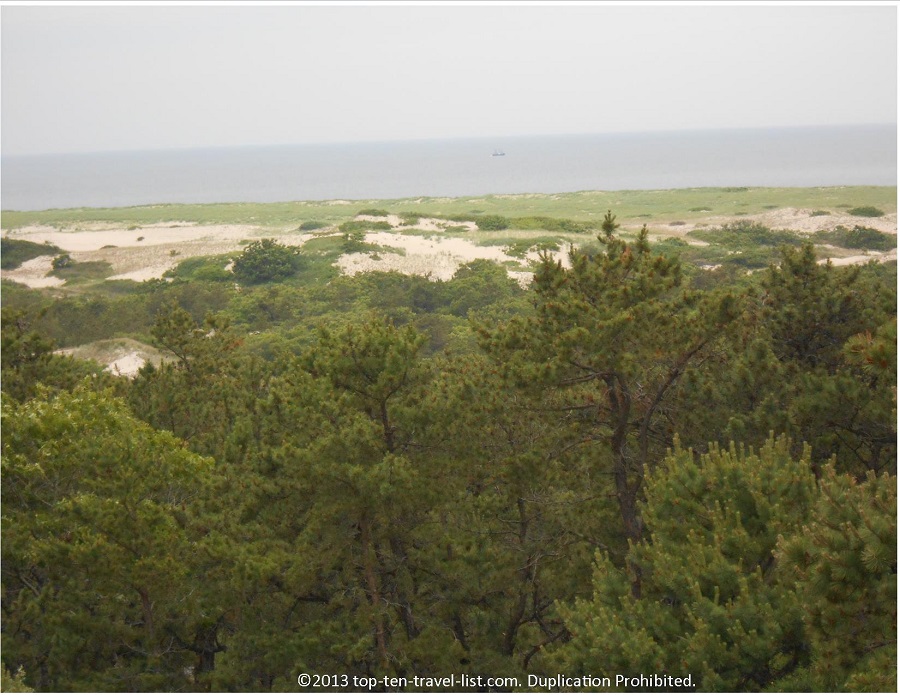 15 Spectacular Places in the Northeast

Running with a View: 19 Fantastic Paths!