A Winter Wonderland in Flagstaff, Arizona 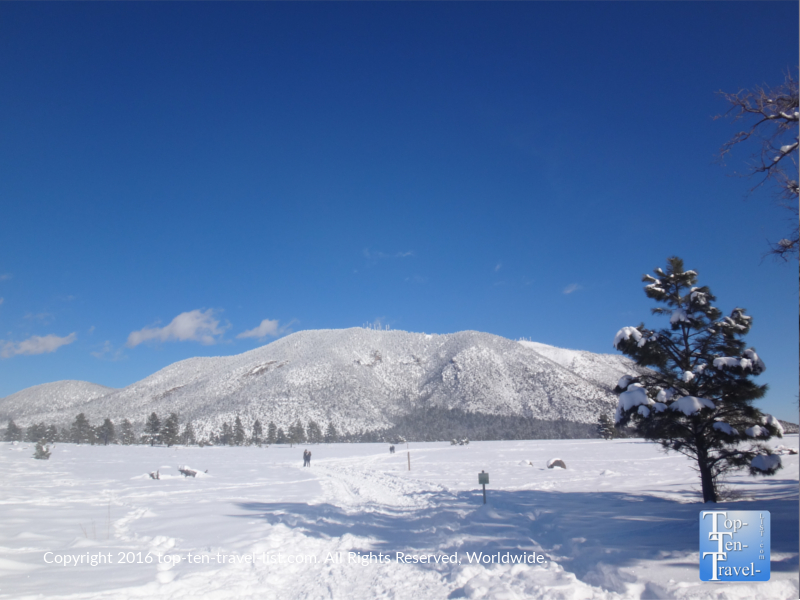 Flagstaff, Arizona was recently declared Arizona’s official Winter Wonderland by Governor Doug Ducey. When thinking of an Arizona winter escape, palm trees, golf, and sunny, warm days typically come to mind. However, a winter trip to Northern Arizona is a fantasy for anyone who loves snow and winter recreation.

Wintertime in Northern Arizona is a striking contrast to the warm, snow less climate of Southern Arizona. Flagstaff sees 4 distinct seasons, including a winter that is often extremely cold and snowy. The city averages over 100 inches of snow per year, placing it near the top of the list of cities with the highest yearly snowfall. 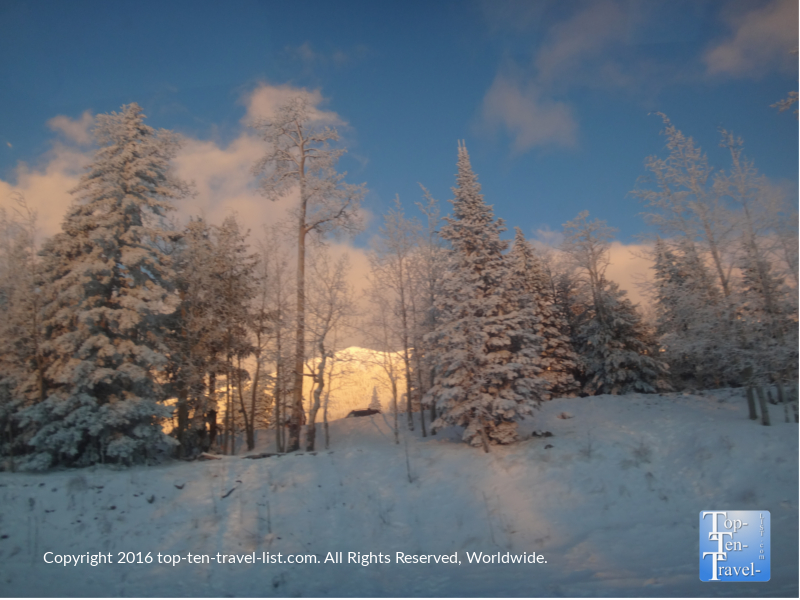 2015 is off to an extra snowy start: as of early January the city is already 20 inches above the average. A large multi day storm the 1st week of January (31 inches) places this year’s snow event on the list of Top 20 Multi Day storms. It would be hard to beat the 84 inches that fell over consecutive days in 1967, but who knows – maybe 2015 is the year due to strong El Nino conditions? 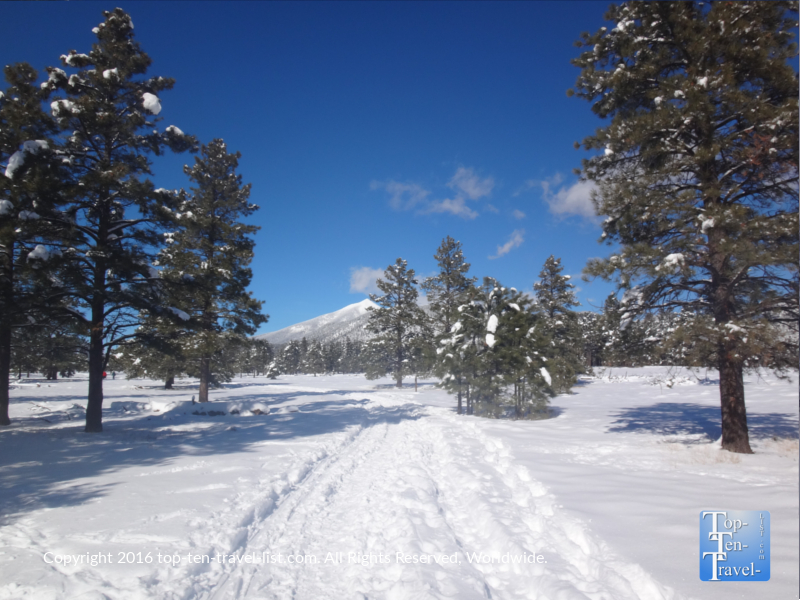 It’s no wonder that Flagstaff claimed the title of Arizona’s winter wonderland. In addition to an impressive amount of snow each season, the city offers numerous areas for winter recreation including a ski resort, a Nordic skiing area, a sledding area, and numerous trails and parks which are suitable for cross country skiing, snowshoeing, sledding, and snowmobiling. 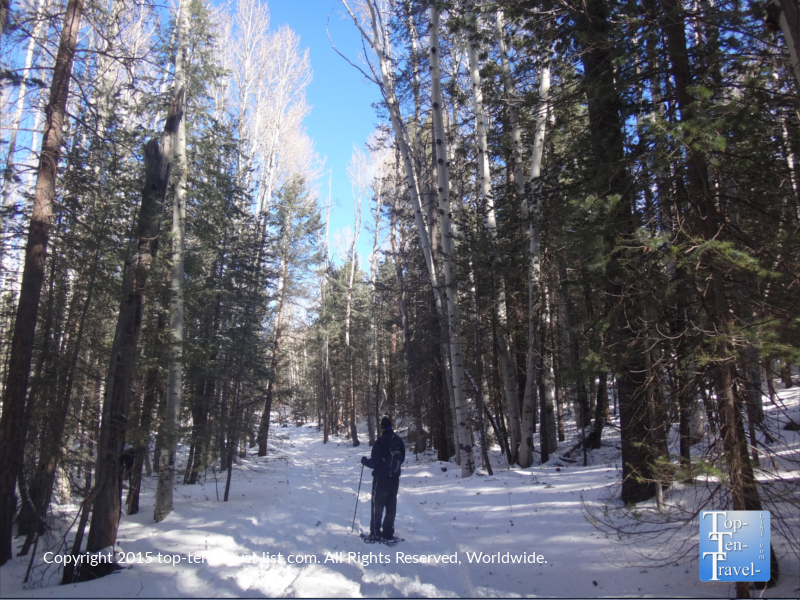 Unfortunately, all this snow means intense crowds every weekend, especially as hundreds and hundreds of snow lovers come up to ski and escape the Phoenix heat! Be prepared for hefty traffic along Highway 180, which leads to Snowbowl, The Flagstaff Nordic Center, and Wing Mountain Snow Play Area. With 3 major winter recreation areas, so many visitors coming to see the snow, and only one road to get to these areas, you can expect some insane traffic. Oftentimes, the wait is several hours on a weekend afternoon.

All of these areas tend to get overcrowded each weekend, both with locals and visitors from areas like Phoenix (2.5 hours away), Tucson (4 hours away), Sedona (just a quick half hour drive), and anywhere else without snow. It can be pretty frustrating for the locals as the traffic usually stretches out to the middle of town. Luckily there are a few options for those seeking a more natural, secluded setting. 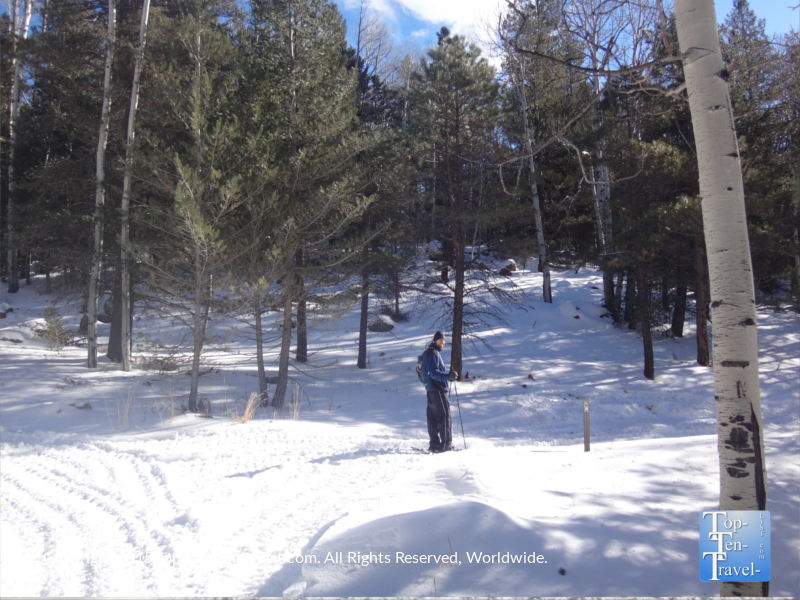 But first, here is a brief overview of the most popular winter recreation destinations

Snowbowl – Arizona Snowbowl, located 7 miles from Flagstaff at a base elevation of 9200 feet, is a ski resort on the San Francisco Peaks. Snowbowl accumulates around 260 inches each winter and generally stays open until mid April. As one of only 3 downhill skiing areas in the state (and being the closest one to Phoenix), it is pretty popular.

Flagstaff Nordic Center – Flagstaff Nordic Center is home to 40km of groomed cross country skiing trails, with plenty of options for both beginner and intermediate skiers. At an elevation of 8200 feet, the center typically receives more than enough snow to operate consistently throughout the winter season. You will find a variety of trails to choose amongst, all of which take you through the beautiful wooded Ponderosa Pine forest.

Wing Mountain Snow Play Area – Wing Mountain is an organized sledding area with a large amount of space available for families to sled and play in the snow, although it is a bit pricey at $15 per car. Sleds are available for sale, as well as concessions and hot drinks.

If you are looking to save some money and avoid the crowds, you will want to skip the options listed above and instead consider the alternatives below. These areas are much less crowded and you will be able to bypass the pricey trail fees (just bring your own skis/snowshoes or rent them). The scenery is just as beautiful, if not more so as they are located in a more isolated setting. Below are a few of my favorite winter recreation areas in Flagstaff. Note: if yo do not have your own skis or snowshoes, you can rent them for an affordable price at Ski Haus.