Attraction of the Week: Reunion Tower in Dallas 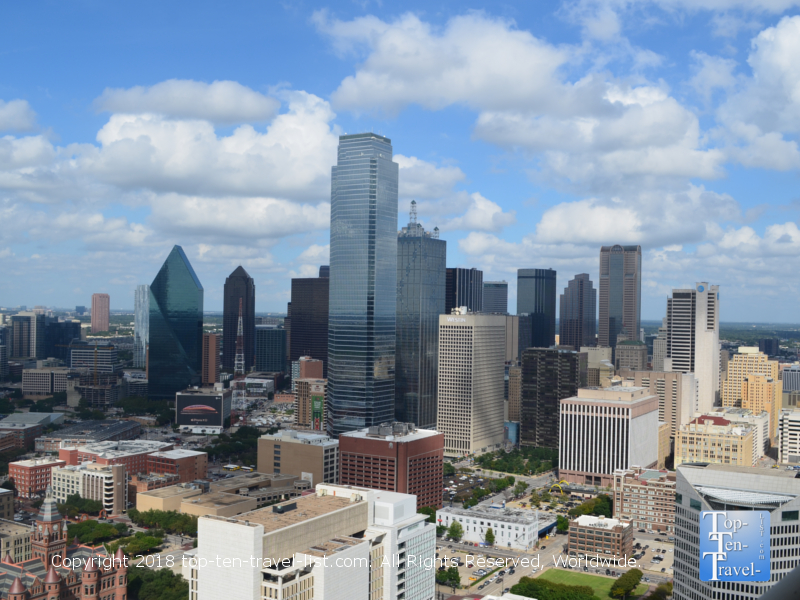 Dallas is most well-known for being home to “America’s Team” The Cowboys, amazing employment opportunities, and Dealey Plaza: site of the JFK assassination. One other thing comes automatically to mind and that is endless suburbia. While the city frequently ranks amongst the country’s most boring due to the seemingly never ending suburban sprawl, there is actually plenty to do for new tourists, especially if you are interested in history, museums, & urban recreation. Many do not know that there are a number of fantastic attractions in and near downtown including the Dallas Arboretum, the Dallas Zoo, and the Reunion Observatory tower.

As Dallas does not see nearly as many tourists as the more popular major cities due to its’ reputation as being solely a good place to live rather than visit, the attractions tend to stay a bit under-the-rater. Fortunately, this means a bit less traffic and congestion, especially if you head out on a weekday. The Reunion Tower is the most recognizable landmark in Dallas and also one of the most popular tourist attractions, although never overly crowded. I was shocked at the minimal traffic I encountered during a mid-week visit to the Reunion Tower in the middle of rush hour.

History of the Reunion Tower 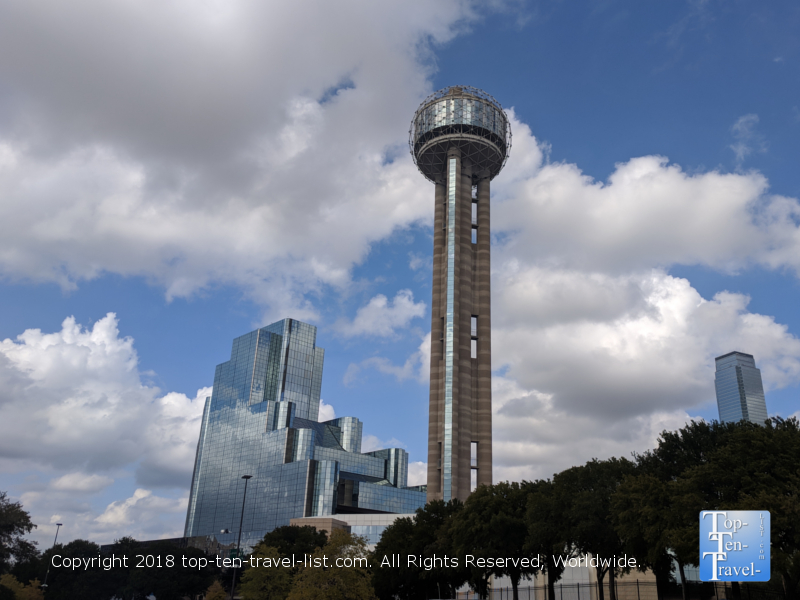 The Reunion Tower is relatively new, having been just built in 1976. The stylish building, although not the tallest, is the standout amongst a skyline that frequently ranks amongst the most scenic in the world. In a recent USA Today reader’s poll, Dallas actually beat out Chicago as being home to the most scenic skyline (not sure I agree as Chicago’s skyline is pretty hard to top!). Although a bit on the pricey side, a visit to the Reunion Tower is a must for photographers and modern architecture lovers. The panoramic 360 views of the city are quite breathtaking. 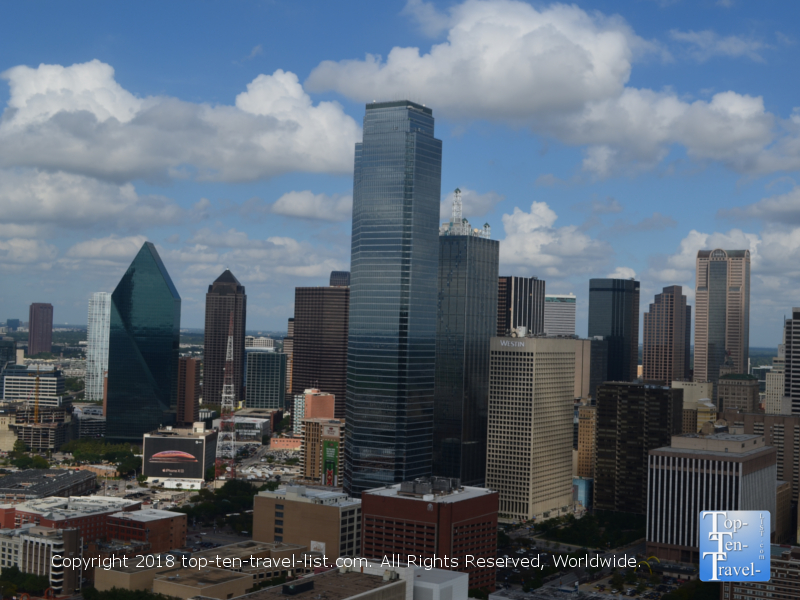 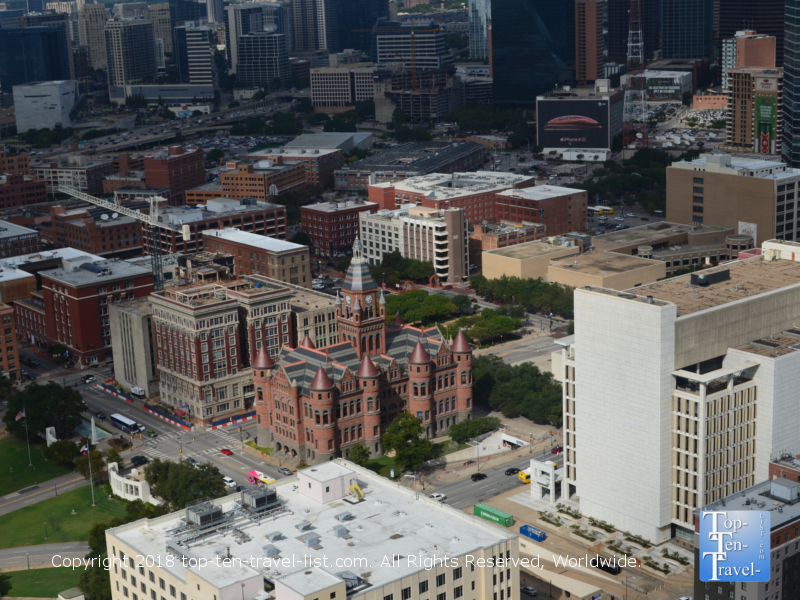 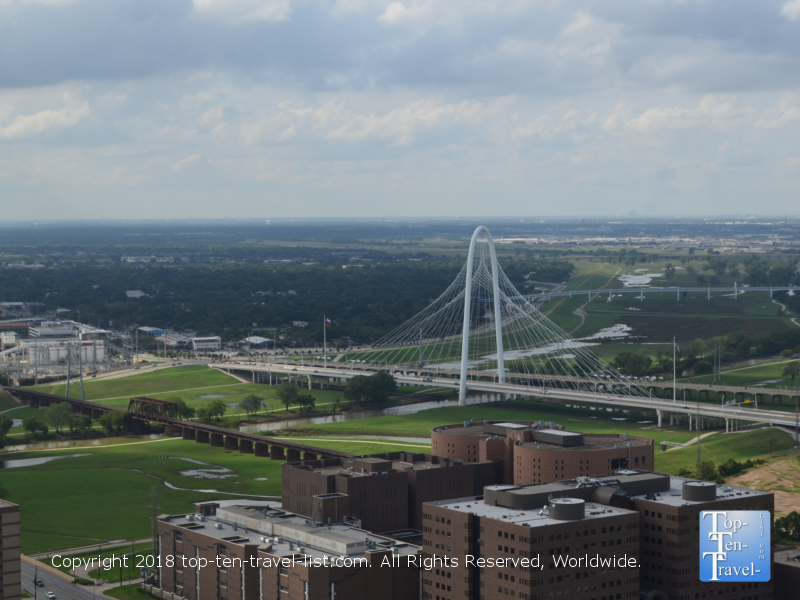 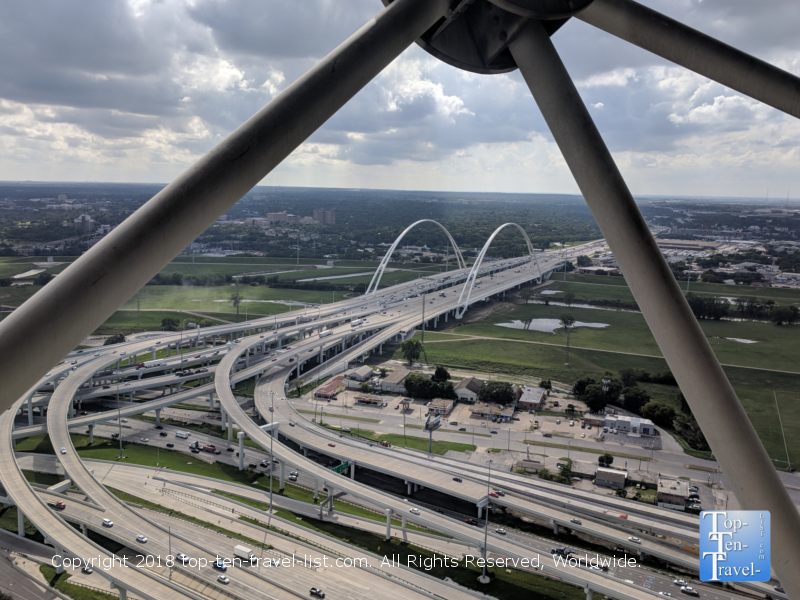 Reunion Tower in and of itself is a pretty cool building. The 561 foot building is known locally as “the ball” due to the interesting architectural top piece. This ball is lit up at night with over 250 lights. They put on an incredible fireworks show, so if you are visiting for the 4th, you may want to put the show on your itinerary. The building is adjacent to the Hyatt Regency and located within a short walk to most of the city’s best attractions like the JFK Sixth Floor Museum at Dealey Plaza, the famous Dallas cattle drive sculptures, and the Dallas World Aquarium.

To get to the observatory deck known as the GeO, you will take a quick glass elevator ride. Although short (just over a minute, the ride up is pretty cool as you get to glimpse at the city as you rise up 470 feet in the air. From here, you can experience the grandeur of one of the country’s most magnificent skylines. The most interesting site of interest is Dealey Plaza: site of the JFK assassination. There is a really nice overview from up here and lots of historical info to read through. The visitor’s center has a nice little touch screen interpretative area where you can learn more about each site of interest. 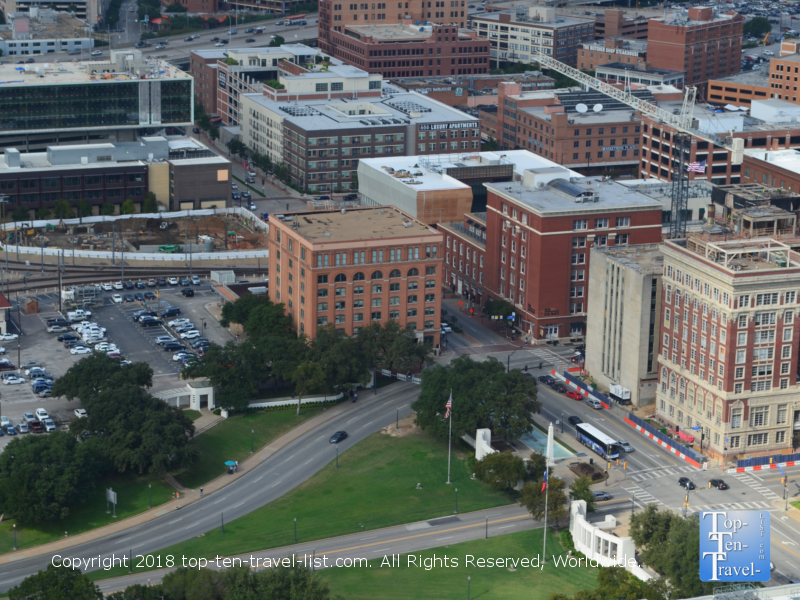 History of the Dallas skyline

The Dallas skyline consists of 36 high rises over 350 feet tall with 19 rising up more than 492 feet. The tallest of the bunch is the Bank of America Plaza which towers over the others at 921 feet, making it the 3rd tallest Texas skyscraper, after the JP Morgan Chase tower and the Wells Fargo Plaza in Houston. The first skyscraper in the city was the 184 foot tall, 14 story Praetorian building, which was not only the first in Texas, but also the first in the entire Southwest.

On an interesting historical side note, the world’s first skyscraper was the Home Insurance building in Chicago, built in 1884, which was at the time, considered the “Father of the Skyscraper” despite only standing a tiny (by today’s standards) 138 feet.

The great thing about the Dallas skyline is that it looks amazing both day and night, and fortunately, the Reunion Tower offers a combo package where you will have the opportunity to view it in both settings. This deal is only a few bucks more, so definitely worth the upcharge if you have the time. Unfortunately, I was a bit strapped for time, and was only available to check it out at daytime, nevertheless, the views were gorgeous. If you are limited on time, I recommend the daytime experience as the views really are outstanding, there are fewer crowds, and its’ easier to obtain great photos.

Dining with a bird’s eye view

The Reunion Tower’s ball consists of 3 floors. The first floor is home to the GeO observing deck. The Cloud Nine cafe is a casual eatery offering light fare. For world class views, you will want to plan for dinner at Five Sixty by Wolfgang Puck, located at the very top on the 50th floor. The contemporary dining room revolves and features floor-to-ceiling windows looking out unto the city and frequently ranks as one of the country’s most scenic dining experiences.

This restaurant offers a really special ambiance not found elsewhere in the city, and therefore, is really popular for birthday celebrations, anniversaries, holidays, and other special occasions.

Tickets can be ordered online or on-site. Basic tickets are $17 per adult, $14 per senior, and $8 per youth. The day/night combo is $22 per adult, $19 per senior, and $13 per youth. You can also pay a few bucks per more and add on one of 3 city trolley tours. There is a JFK tour ($28 total per person including the tour/observing deck), city tour ($31) and hop on/hop off ($36). The best deal of all is a City Pass deal which includes entrance to the observation deck plus 3 other attractions for just $49 per adult and $33 for kids aged 3-12.

There is a large parking lot on-site. Pricing is per hour, so it just depends on how long you will be exploring. You can also find a meter around the city as a cheaper alternative.

Autumn at the Dallas Arboretum and Botanical Garden