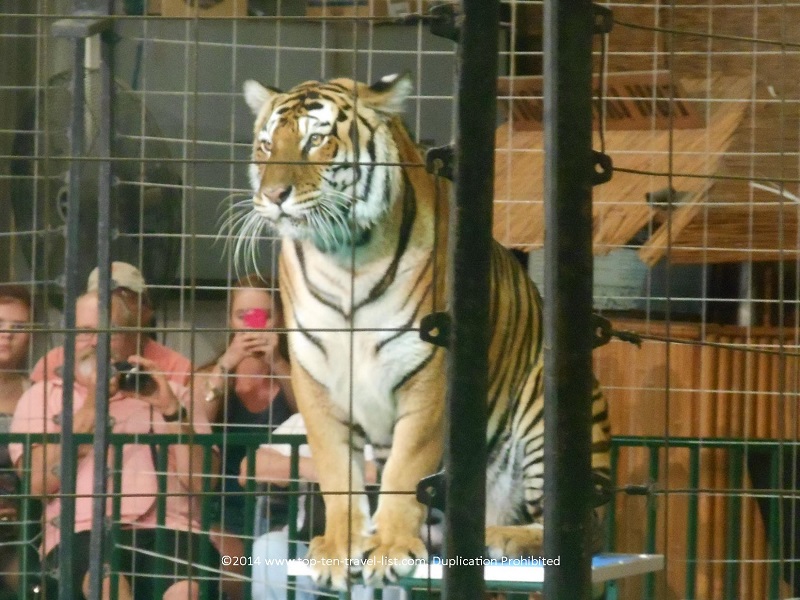 Big Cat Habitat is a wonderful non-profit sanctuary for big cats. In addition to cats, brown bears, black bears, chimps, zebras, camels, exotic birds, and tortoises are also rescued and offered a safe haven at Big Cat Habitat. None of these animals are taken from the wild, but rather rescued from abuse and/or possible euthanasia. Founder Kay Rosaire has more than 30 years of experience working with these beautiful exotic animals.

The staff seems to be really dedicated to providing the best refuge they can for these abandoned wild animals. Even though they do not have money for advertising, they do their best to raise money to keep and house as many exotic cats and other animals as possible. There are both indoor and outdoor spaces for each of the animals, and pools and shade for the animals to cool off in the hot Florida sun. 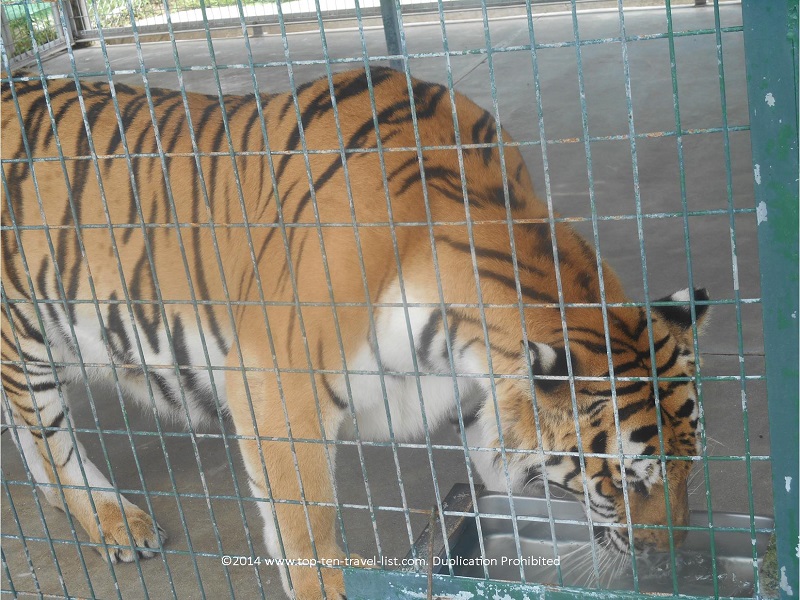 The cages are a bit small, however, hopefully they will continue to expand and provide the animals with the space they need. Finding a way to house the animals without the use of cages would probably be better. Some of the animals looked pretty bored and could use more space to run around.

Big Cat Habitat offers animal encounters which enable you to see the staff working one on one with the tigers and chimps. Positive reinforcement training is used to get the animals to listen to the trainers. We were told that animals that receive mental stimulation actually live longer than those who do not. The animals appeared to have a strong bond with their trainers.

We got to witness training of both a tiger who has only been at the refuge for 3 weeks and also by an older well-seasoned cat. It was an interesting experience to see someone working up so close with a tiger. I would personally never risk getting up so close to a wild animal, but it was interesting to watch someone with so much experience.

These animals are very intelligent and quite interesting to watch. Donations were collected after the show in attempt to improve the sanctuary and take in more animals in the future. 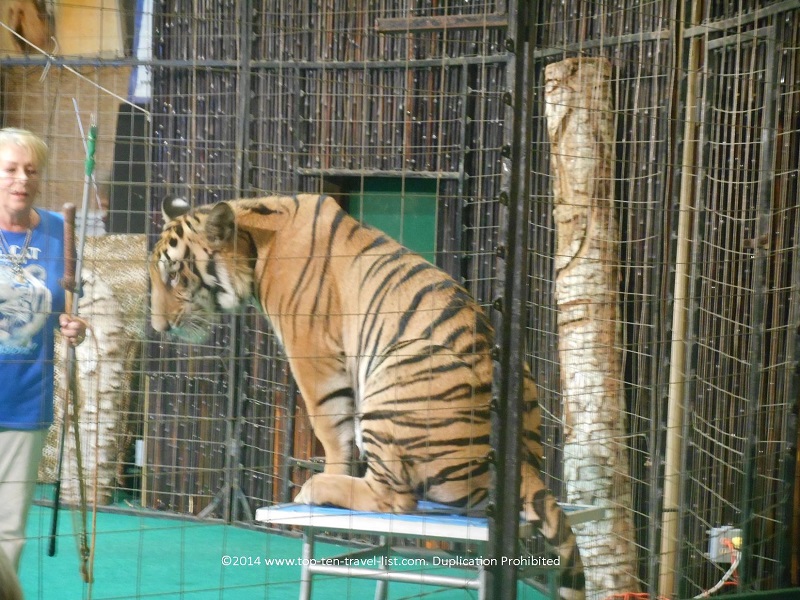 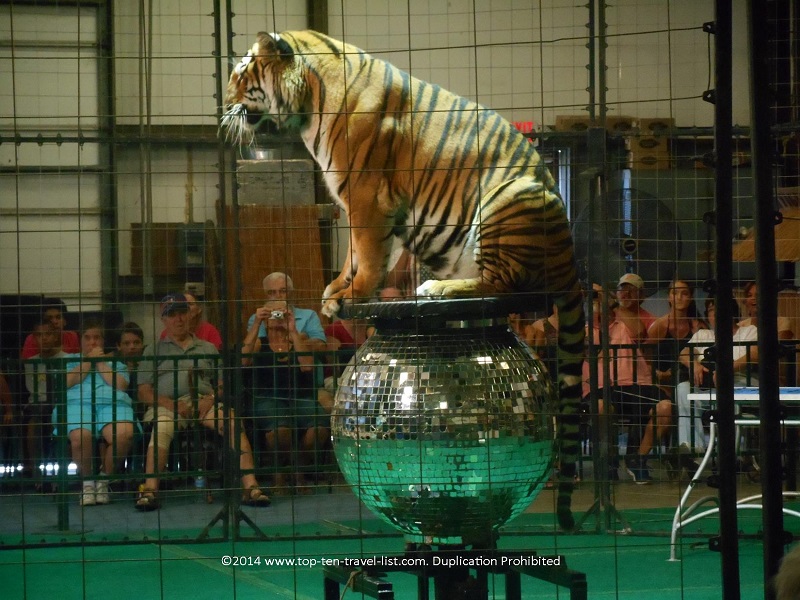 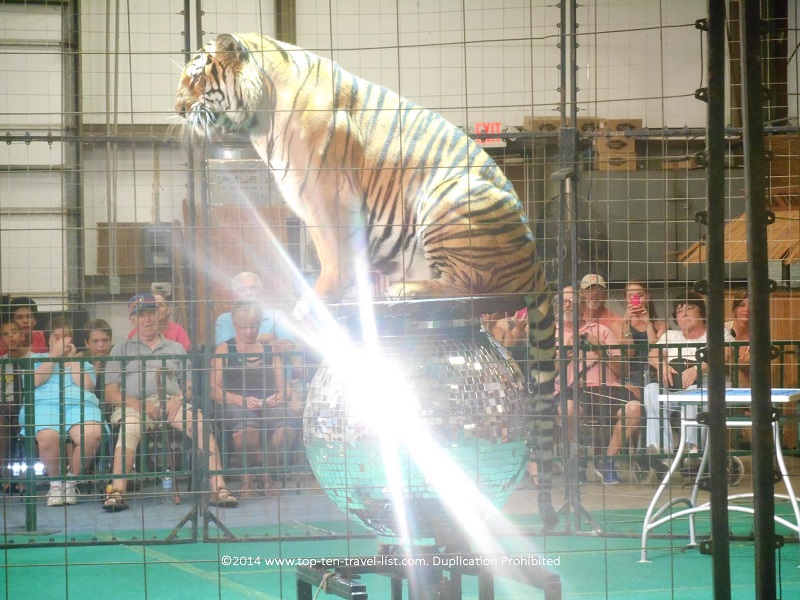 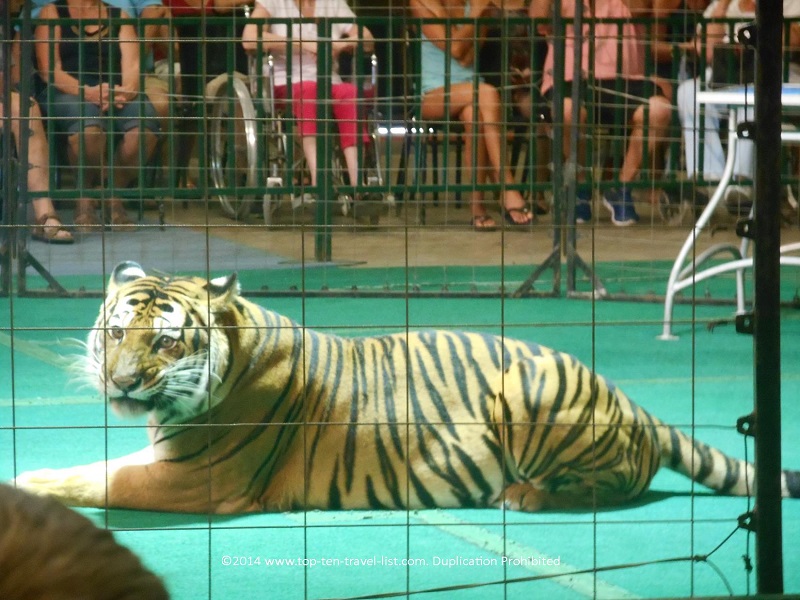 We were lucky enough to see a special performance from a chimpanzee named Chance, who has starred in several Hollywood productions including “The Wolf of Wall Street.” The chimp was extremely talented and put on a great show. He seemed to enjoy the attention and praise, both from the audience and his trainers, whom he seemed to absolutely adore. Unfortunately, Chance was pretty fast, constantly jumping around, so I was unable to capture a perfect shot.

After the animal encounter show, be sure to take a look at all the tigers and lions the habitat has rescued. The cats were not as active as the bears with the majority of them sleeping/relaxing.

The rescue is currently home to 60 cats 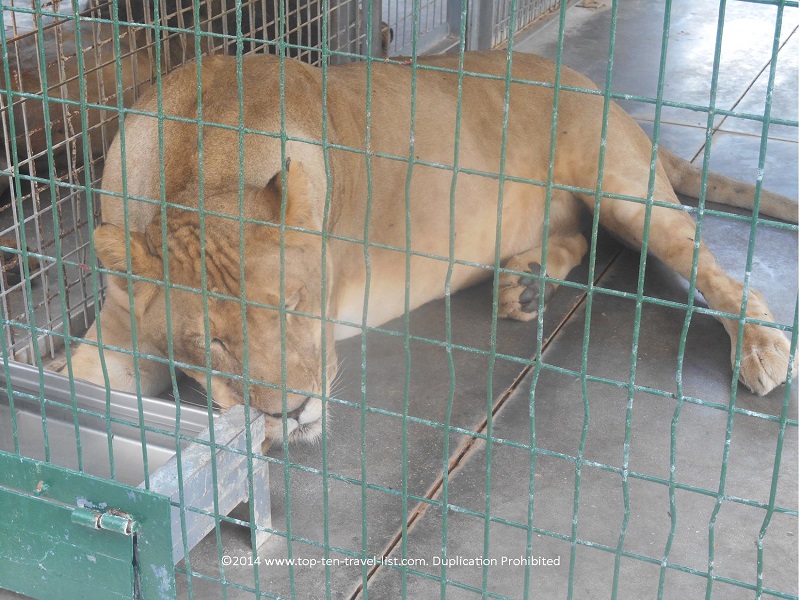 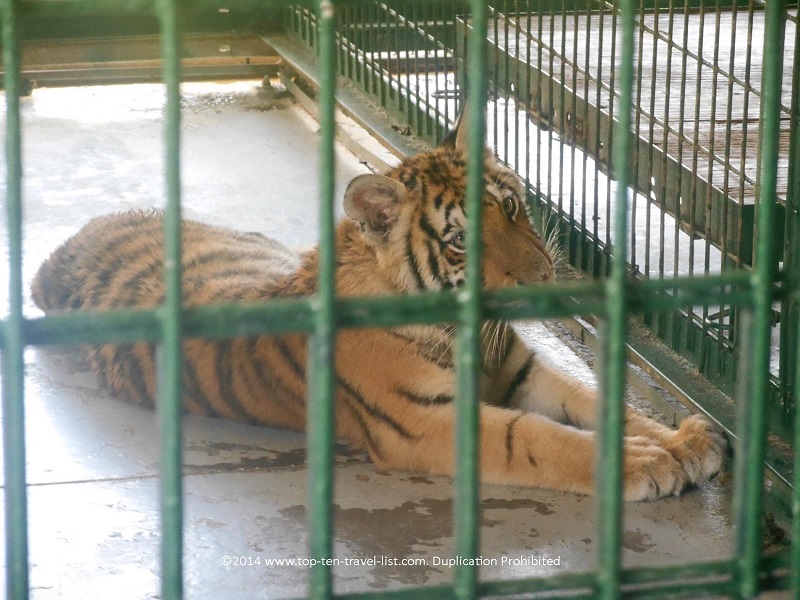 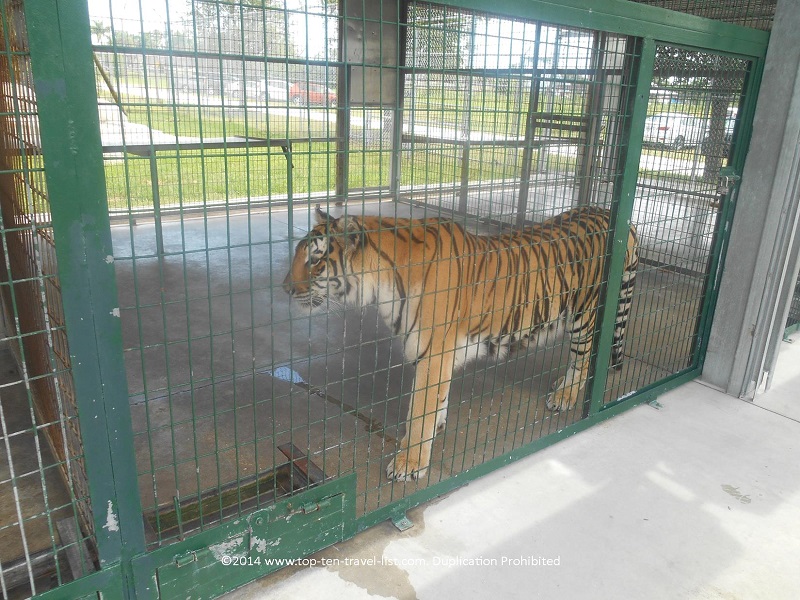 One of the most interesting animals on site was a Liger, a cross between a lion and tiger. At 1100 pounds this cat stands tall as the largest in the world.

Ligers  are not found in the wild. Unfortunately, they are typically bred for public amusement. 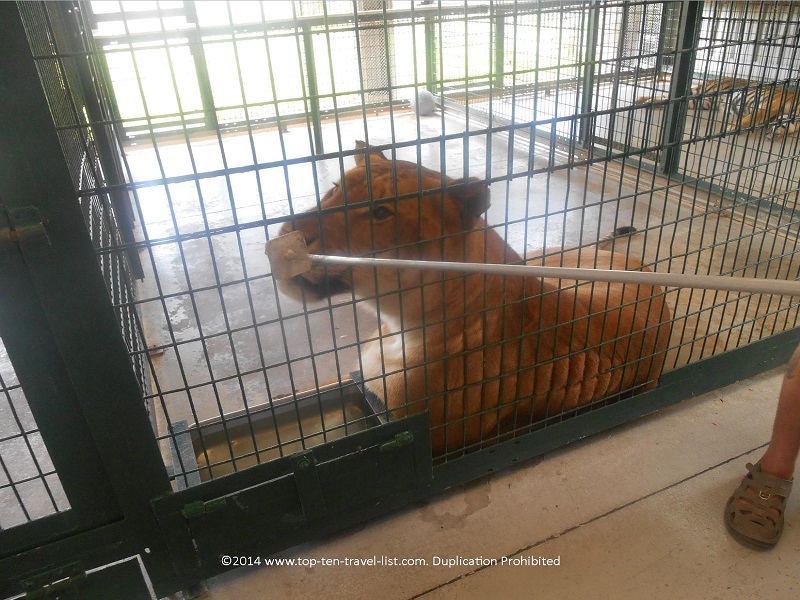 Being able to view grizzly and black bears up close was a fantastic experience. You will get a much closer glimpse here than you would at the zoo. Many bears were enjoying the day in the water, like the one pictured below. Most bears I see at the zoo are always sleeping, so it was really cool to see them walking around and being so active. The last bear pictured is a Kodiak bear, the largest bear species in the world. They can reach a height of 10 feet and can weigh up to 1500 lbs!

Great up close views of the black & brown bears 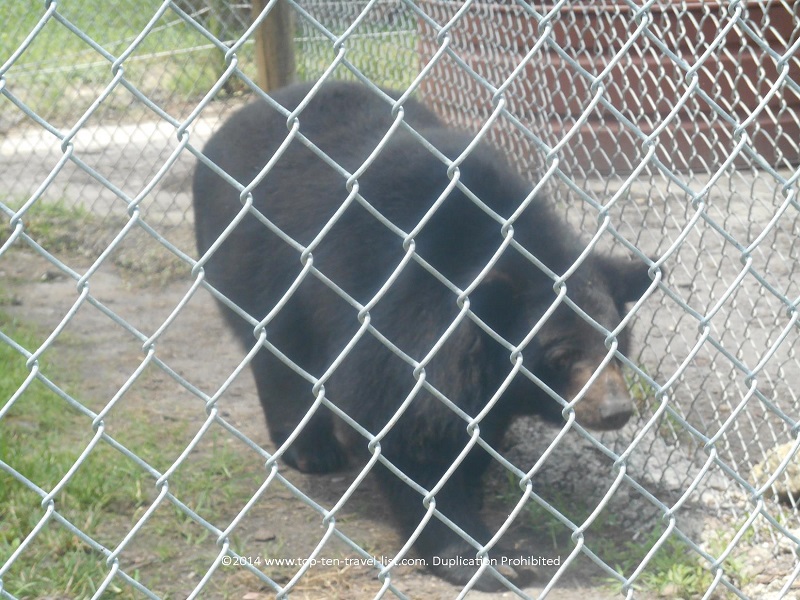 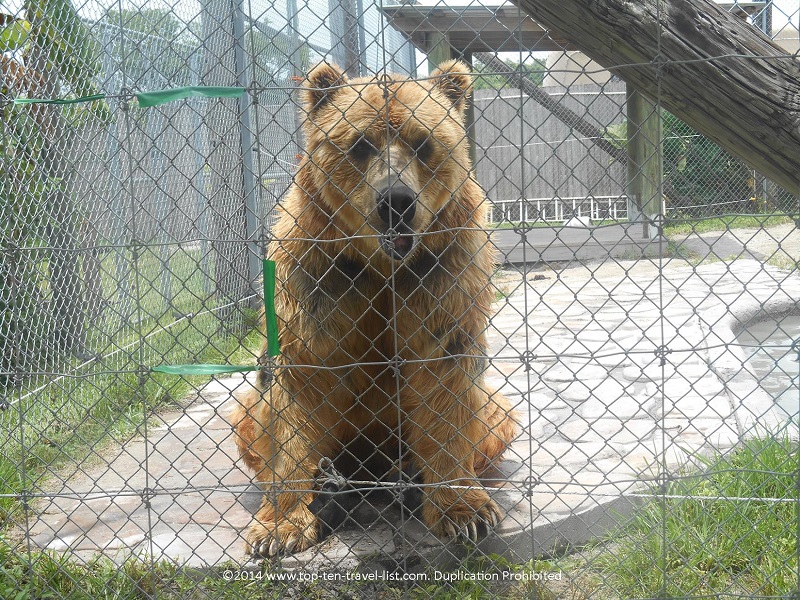 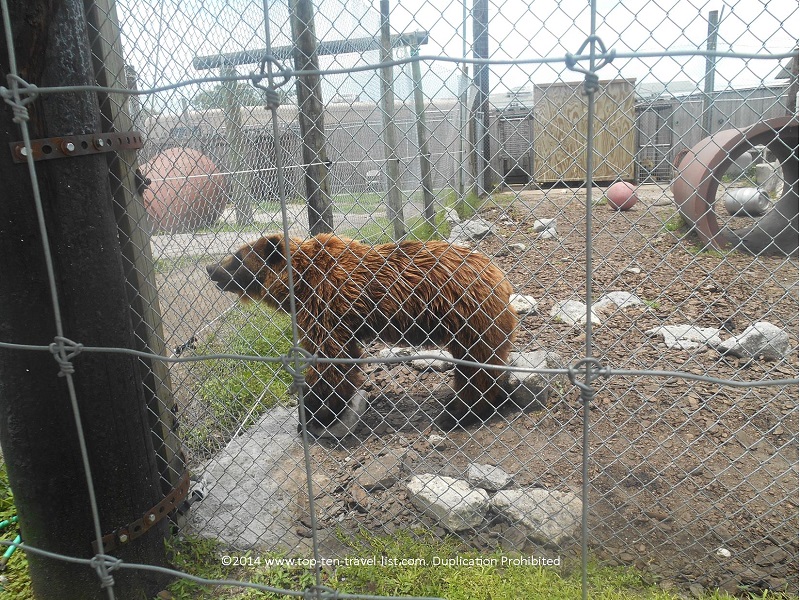 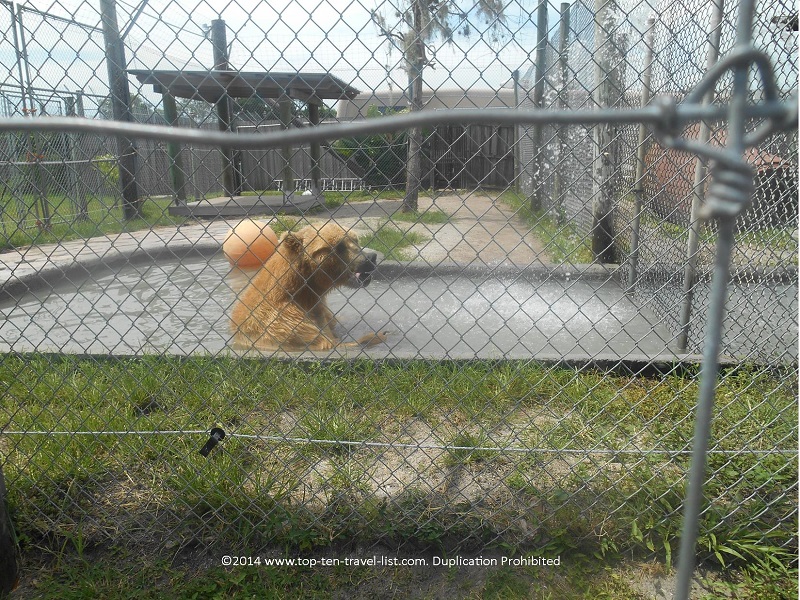 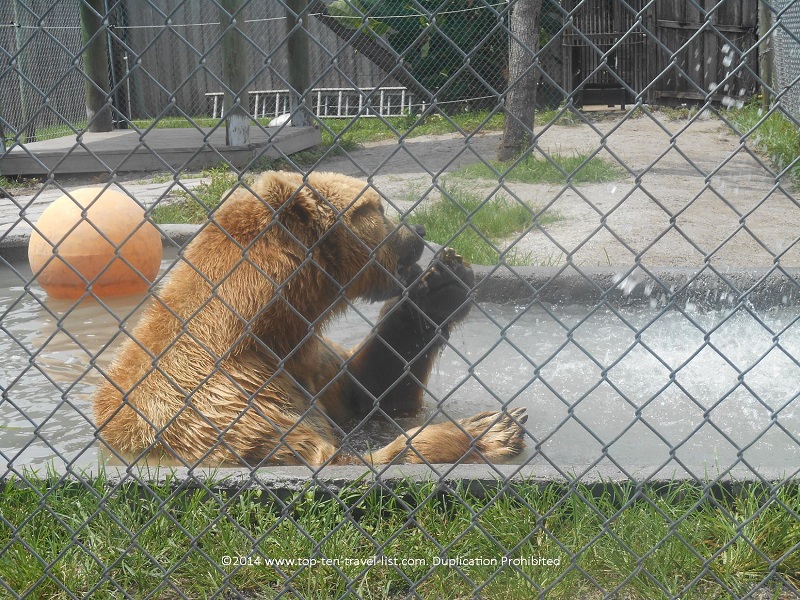 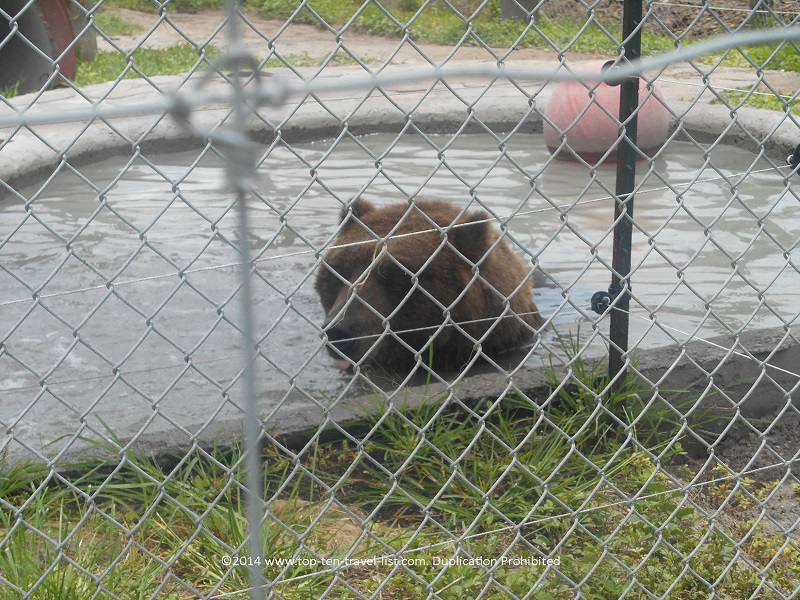 A petting zoo and koi pond are also found within the refuge. You will be able to go inside and pet the goats and llamas as you would at a petting zoo. The habitat also houses a number of tortoises, which can live between 50-60 years in captivity (as opposed to 80 years in the wild).

An employee feeding a llama 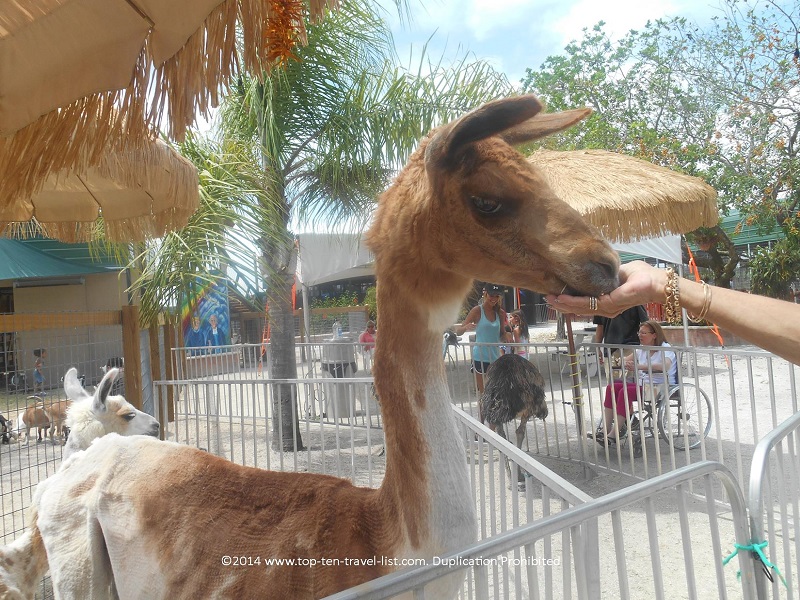 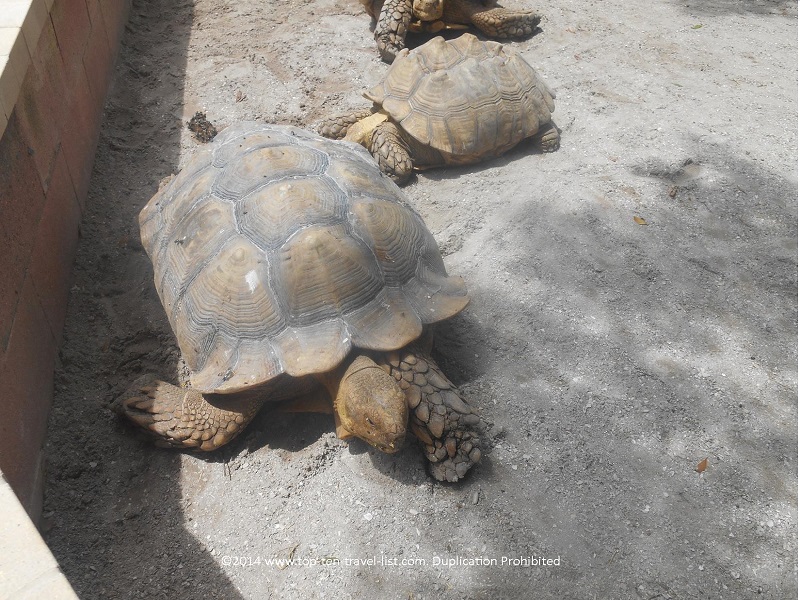 Big Cat Habitat was absolutely crowded on our visit. There was not an empty seat in the house for the show. Big Cat Habitat is a great place to visit on your trip to Sarasota. I hope all the money they are taking in is going towards expanding the facility and providing a better life for these formerly abused/neglected animals.

Admission: $15 per adult, $7 for children, Parking is free

12 things to do in Sarasota, Florida

Fun-in-the-Sun: A Day in Siesta Key on Florida’s Gulf

The Most Scenic Bike Paths in Tampa Bay